Not a reference to the rather good Red Hot Chili Peppers, nor the shambolic pop mauling from All Stains – sorry, Saints. 😛 As I made my way to Chameleons last night, so I drove under the new bridge by Queen’s Medical Centre. It’s been a while coming and as I’ve sat in traffic on the way home, I’ve watched it be slowly assembled and now, it straddles the dual carriage way, ready to take the next phase of the tram from the city out to Clifton. It’s nice to see the money I’ve been charged for being able to park at work on land the firm owns, put to use 😉 I would have liked to have taken a picture because I like changes in architecture and I like before & after shots of how the city changes. Whoever designed it, I think they did a very nice job.

I also managed a day out of the office, as I was out in rural Nottinghamshire, helping a project group with some IT work. I really enjoyed the change of place, and being able to sit around with the people who’d be using the system, and getting to listen to what they wanted, was really useful. There was no ‘hard line’ or toys-out-of-the-pram, just a group of adults getting things done. I can’t help but feel we should do more of this. 🙂

On to other things! 🙂 It was party night at Chameleons and for once, I had got the right evening. I had over-packed, not being sure what fitted and what mood I was in. I’m glad I did as while I had managed to shift a bit of weight last month, I’ve not been keeping up with the dog walking, so the 90s red body con dress went back into the bag for another night. I settled on the pink number (I do like a bit of repeat wear after a gap!), some new star pattern tights and last week’s killer heels. I toyed with the idea of my shoe-boots, which still seem popular, but I preferred the heels. 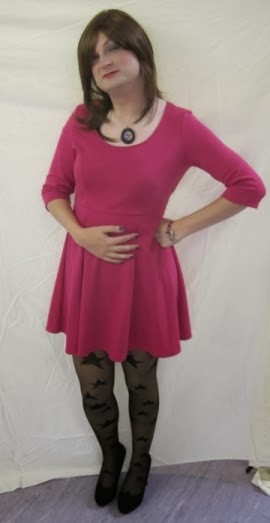 I found a use for the clear nail varnish with glitter flecks in it. It seemed to go rather nicely with a black undercoat. I might try that again! I kept my eye make-up low key as I was going for a bright lipstick. I bought a lip pencil from Boots Number 7 range and that did help stop any feathering/bleeding during the evening. I think a bit of Lipcote also helped, but I find that a bit strong on my lips. Funny thing with make-up, after an evening of all glam, once I get all cleaned up, my skin feels wonderfully moisturised in the morning. Do you get this at all?

The evening itself went very well and everyone had been kind enough to bring along something to eat for the party. Rebecca had brought along some subtle lighting, so the place was suitably subdued. As one wit put it, it almost doesn’t look like a Community Centre now 🙂 All that was to unveil the food and for someone to get the speakers out of the cupboard, then hook up the MP3 player. Talk about portable disco, it’s a doddle now. 🙂

[Oh, embarrassing moment: Apparently, I leaned a bit too far when plugging the speakers in and my skirt rode up. Luckily no-one passed out, but I will need to keep this in mind from now on. /blush ]

Much fun – and nibbles – was had by all and by keeping the music in the background, there was plenty of time to catch up and chat. Sadly I didn’t get to resell my old wig, but as I said to Pat, better that the buyer be 100% happy with it, than waste the money.

I had a really good night out and with half-term coming up shortly, I’ll be missing that meeting. One thing that did strike me about the meeting, was the next day. There are times when I get a nudge from the Pink Eyed Monster, hmmm…. that didn’t sound a dirty in my head, but lets stick with it. 🙂 I guess it’s a cross between Jealousy and Pink Fog, rather than any dodgy. I don’t know about the rest of you, but there are times when you see people and…. I’m ashamed to admit it, I have been known to get a little envious of their clothing choices. Still, I know that leads to a darker path and I think it’s best for me if I think on what I do have. Great family, good friends, good times and a good life.