I was a teen in the 80s and as any Stranger Things viewer will know, roleplaying games were a thing. For a few hours, you could be in another world as someone else and it was all good fun. I never played D&D, but we did give ‘Advanced Dungeons & Dragons’ a go for a while.

The game that really had my attention was Cyberpunk. A schoolmate tipped me off to it and if I’m honest, I’ve always been more of a sci-fi geek than a fan of fantasy. Mind you, I absolutely loved playing the Skyrim computer game: that was just amazing.

So Cyberpunk – aka CP – fitted my late teen misanthropy. Good & evil weren’t a thing: everyone had an angle they were playing and there were times when the (so-called) heroes of the hour were, well, doing some decidedly questionable moral activities. Nothing out of the ordinary compared to your typical Bond film – in terms of violence or cons – but not the noble quests of Tolkien’s works or TSR’s Forgotten Realms.

Gaming was a chance for friends to get together and explore ideas that wouldn’t be possible until computer games caught up some 15+ years later (IMHO). To play, you needed a rule book, some funny-shaped dice, time, and your imagination. All things considered, it was a pretty inexpensive hobby and lots of groups would make up their own rules or settings to keep things fresh. Want to do an A Team style game or play as perps in a Judge Dredd world? Fill your boots. 🙂

Hauling this all back to T stuff, the game let me play a female character. I wasn’t out back then and scared of the idea that others would find out. I would play one game as a male character, then the next game as a female one. It probably goes without saying which characters and games I remember more than others 😉 Just like today where having a female character in a computer game somehow helps keep the Trans Clock from ticking towards midnight, so did the same in RPG terms.

Next year there will see the release of Cyberpunk 2077. I guess it’s all the stuff from the old game plus whatever the original creator and new team have thought of. One thing that’s missing from the old game – and oddly, predicting the future is rather tricky – was the lack of smartphones…. and no Transgender Tipping Point. 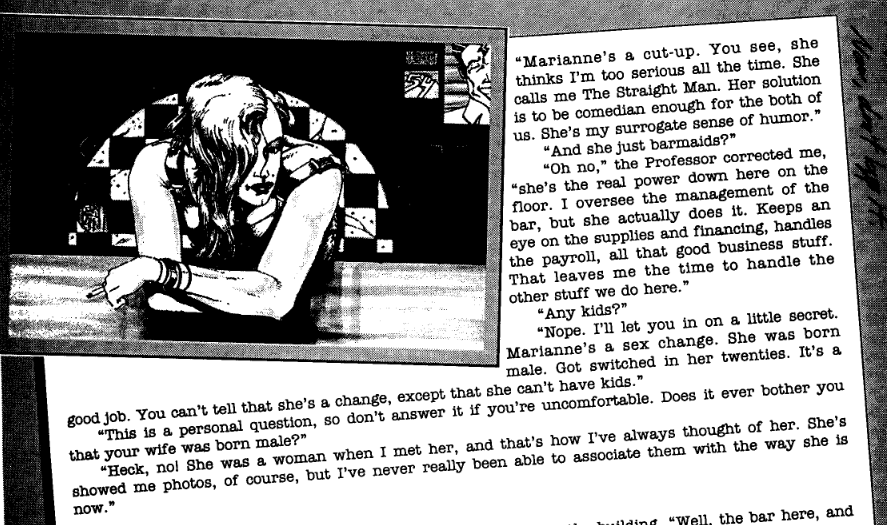 The old game was very gender binary – give or take a few minor mentions – and certainly, the language used in the books (‘sex change’ or ‘swap op’) mirrors the time when they were written (the early 90s).

Thing is, when I stumbled upon such characters, they were not – unlike many portrayals in films – victims or murderers*. They had a backstory and they were part of the world. Sure, the language feels kinda off compared to today, but there is a positive trans character. They’re in charge of what they do, loved by their partner, and – crazytalk I know! 🙂  – they are more than just trans.

In more recent news, the computer game company put out a demo featuring an advert of a trans person. I think those of us on that continuum can say “that’s not a great tuck” and I won’t be linking directly to the image as it feels quite graphic. But, I’m not offended by that ad. I know I’m very late to the party, but I’m here to clear up and take out the trash. 🙂

The world setting is one of corporate greed turned up to eleven. So, yeah, some of us with our real-world eyes looking in may judge that as inappropriate… but, as a former gamer and trans person, I look at that for what the advert is. It’s making the point that the companies are not your friend. They want to exploit and they’ll ride any bandwagon that pimps their stuff. A quick look at the headlines this year will display a few companies caught stiffing the consumer.

As someone said about dystopia novels: they’re a warning, not a handbook. 😉