As a kid of the 70s, I read my fair share of comic books. Yeah, in a world with three TV channels and no YouTube, there was a lot more reading going on. 🙂 As to comics I wouldn’t say I read loads, but a fair few and mostly UK ones. For some reason, I never quite got into the American ones. Possibly because they always felt midstory, and quite possibly because our local newsagent’s range was fairly thin. Hey, welcome to living in the sticks in the pre-Internet, pre-eCommerce world. 🙂

Ignoring the WWII and sports strips, the more fantastic stories were the ones that caught my eye. Superheroes: present and past. Not everyone gets the Marvel or DC treatment, so some I guess are much forgotten.

But if there’s a point to this nostalgia, other than I don’t remember any trans* specific characters, but this was the late 70s; hardly a time of political correctness, let alone equality. But certainly, the idea of someone with a secret identity struck a chord. Chuck into the mix the idea of said hero (or heroine) having to rush getting changed or be found out, well, I don’t even need to say any more on that do I? 🙂

The thing is, as someone who does hide who they are, it can be quite tiring. I’m so glad I don’t have to pretend when I’m around the Ever Lovely Mrs J. The fact that I can be just me, rather than putting on the mask of male behaviour, is incredibly liberating.

So, if there are any would-be superheroes, if I had one bit of advice – other than when you do meet your nemesis, don’t pull your punches and do fight dirty 🙂 – it would be this: don’t spend your regular life pretending. It’s really hard, watching what you have to say, and keeping what who you are a secret. Instead, try being all of you, but, do leave the cape and the power gauntlets out of the office. You know how these things escalate 😉

On a related note, I heard from Sandi that one of our oldest members at Chameleons passed away at the weekend. The lady in question was Jane. She, along with a friend Rhona helped keep the group going through the 80s. I really don’t know when she handed the torch on to Tracey & Sandi, but I’d guess it was a fair few years. Still, making a trans group a success, especially in less open-minded times is, at least in my book, quite an impressive feat. Hats off to you, Mrs.

I should add, that if you’re pushing the gender envelope. Either by being out, helping others, running a website or keeping a group going; keep on doing that. Please keep on being you and doing that awesomeness that helps makes it easier for this and the next generation of trans people.

Words on an image

Over on social media, Tania made a comment about the complications around running two wardrobes. Sometimes, a line just comes to you and I did say I’d stick the quote as a meme. Well, all the cool kids are doing it. 😉 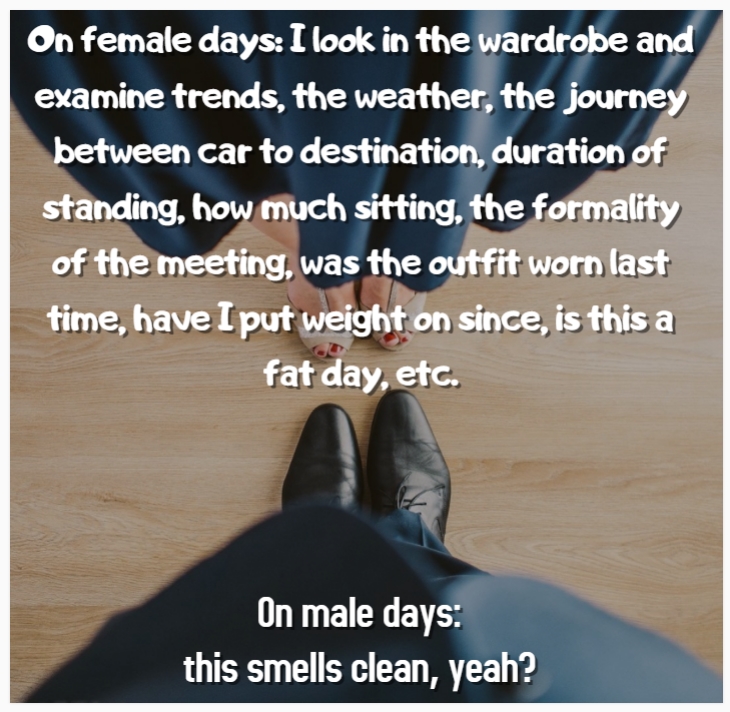