You may want to get comfy. This may be a long post 😉

With luck tomorrow, I’ll get a day out. Not just away from home or work, but also not in Richard mode. Not that I begrudge my identity. Far from it, I doubt I’d be where i am if I’d ploughed a ‘bi-gender’ furrow of my own. They do things differently in the past. 🙂

So, I’m somewhat nervous, as I don’t fully know if tomorrow’s trip will play out. I’ve had one failure before and although it’s only a week until Chams, I can feel the rumblings of distant storm clouds. That or the chilli beef wrap hasn’t agreed with me 😉

Other than nerves, and perhaps here’s the nub of it: I’m about to break my promise about not going out. This isn’t the first time and I don’t it’ll be the last.

It’s complicated. :-/ I’ve had a night out in Leicester and that was fine. When the kids were tiny, I’d get changed at home and travel to Chams dressed.

So, why the guilt? Is it using holiday time? (we’ve nothing booked). It is deceit? (I do hold some personal things back. We all have secrets).

Another, and less introspective part of me, asks why not? I’m being careful. I’m not cheating. I’m going far from home. Plus, I’ve not been out for months. Perhaps, it is that old adage of taking care of your needs and feeling the rub that you’re not a good partner, or parent, because you are thinking of yourself first.

Whatever this heady brew of conflict is, with luck, I’ll look it in the eye, smile turn on a higher heel to face the world.

Once more into the corset, dear fatty, once more!

I make it out of the house with a ‘bug out bag’ in the boot of the car and I’m heading over to Leicester. I stop twice to do my nails: coat one, drive off and dry as I drive through the traffic. Then and other stop and coat two before moving on and finally arriving in the centre of Leicester.

I’m parked up and oddly, my nerves have settled. I don’t know if I’m getting used in to what’s happening, or that I know the only way is to open the car door and start walking. So, that’s what I do. I don’t round my shoulders or scurry between the shadows. It’s face forward and meet the world. I can hear my heels sounding off against the coloured concrete. If I wanted to sneak around, I should have worn quieter shoes.

I stop for a quick snap by the mirrored walkway; pretending to read a message on my mobile. A member of the Highcross team asks if I need any help, but I politely say I’m okay. She smiles, and moves on.

Next stop: New Look. It’s just over the bridge from the car park and John Lewis, plus I’ve that voucher to use up. After a short wander around the store, I find some low heeled ankle boots and they are sooo comfy. No wonder so many ladies in the office wear them! I try some over the knee boots just for fun, but they’re an eight and I’m only an eight, if it’s wide fit. It isn’t, so I can’t get my foot in. Bugger. 🙂

With the voucher, my new boots cost me six quid (result!) and I’m a happy pixie. As I move to the stairs and lady and her daughter stop me. “Excuse me,” she says, “This may be a bit personal – “. A flurry of possibly trans* questions and answers speed in my brain. She finishes: “ – but could I take a picture of your hair, please? It’s exactly the colour and highlights I want in mine. I won’t take a photo if you don’t want and it’ll only be from the back.“

Well, I’m a little thrown by the question, but sure, why not. We have a little chat and a laugh, then we part ways. I would have loved to have heard how events played out, when she explained to her hairdresser how she got the inspiration and the photo. 🙂

I pause in one of the department stores to try on a shrug or cape. Why are changing rooms so warm? 🙂 Eventually, I wander slowly through the shopping centre and see if anything catches my eye for Mrs J or the kids. It doesn’t and I head outside. It’s p*ssing it down, and I tap may way through the puddles – gah, this is easier in flats! – to take shelter in T K Maxx. There’s not much going on clothing wise, but I buy a brolly. The lady at the till (wearing a fabulously twisted and twined headscarf) quizzes me about the weather.

Suitably armoured against the inclement weather, I visit a few more high street shops. I catch a few people staring – both blokes and one lady. I smile and they look away. Holy gender disruption, Batman: a happy trans person! 😉 But the reality is, most people are too caught up in their own world, or, if they do see me, I’m just another person – trans obviously – in the world. I’m no threat to them, so they ignore me, and I’m cool with that.

I spot a plus size clothing shop – Yours – and they’re advertising shoes up to a size 10. I pop in to see what they have and make a note to put something on the Chameleons forum. I try some leather look leggings on in Dorothy Perkins but they’re too lose, so they go back. I try a blouse on in H&M, which looks okay, but while I should update my tops wardrobe, it doesn’t quite do it for me.

I wander away from the main shopping areas and stroll through the Lanes. If you don’t know Leicester, but the Lanes is a collection of small shops and not so many chain stores. Not that I have anything against the latter. In the small streets, there’s food, drink, books, records, shoes, clothes, jewellery and a pub or two.

I pop into a boutique and get two things for the Ever Lovely Mrs J. Both items will raise a smile this Christmas and they’re unusual too. Man, am I getting in touch with my inner hipster? Sheesh. 😉 At least I didn’t say artisan. 😀 I had a chat with the shop owner, who was saying she had trouble getting people to her web site. She also said she’d not updated the stock on-line. We chatted about how some of the gift shops in the Lakes or in other touristy places, start to serve ice-cream to draw folk in. I know we’ve succumbed to that more than once! 🙂

I stop off at a coffee house. Years ago, Sophie and I stopped for a drink and to rest our feet. I sit and look out of the steamed up window and just enjoy the subdued background conversation. When I’ve drunk up, I pop to the loo – luckily ‘shared’ facilities – and I swap my heels for my new boots. Perhaps an hour plus of walking in heels (thank you Google Fit) is a bit much after such a long break. 🙂 Honestly, how (natal) women manage in, I don’t know and they have my respect. 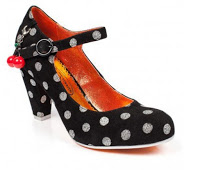 On the way out, I visit Irregular Choices, who make the most fab shoes. Kooky stuff and so pretty! I found some black sequin ones, then some pretty silver dotty ones. Sadly, none are in my size, hohum! But they have a web site and do go up to a 10. They also had some Disney shoes – think RuPaul meets Princess Aurora – which flashed as you stomped into them. Yes, perhaps a bit too kitch, but fun none the less.

While there, I had a lovely chat with the sales lady. I make a comment about picking something suitable for the office and this leads me to say I’m only a part timer; that it’s a day out and then the conversation moves on to her shopping habits. Sure, a good shop assistant will draw you in and help, but I think you can tell genuine politeness from professional banter, if that makes sense.

I head back through the lower floor of Highcross and pop into Cath Kitson. They have a gorgeous dress and as I’m looking for my size, a young lady asks if she can help. A moment later and I’m in the changing room trying on the rather pretty dress. It’s 90 quid, which is more than I’d spend on the Ever Lovely Mrs J and certainly a lot more than I’d spend on myself. Instead, I enjoy the look and hand it back.

After another wander through John Lewis and a look at the make-up, I head off thinking how I can get changed before I can get home. Usually, I’d be home by 2pm and get changed there. I know that with the Ever Lovely Mrs J being at work, it’ll be too close to call and I don’t want to risk it. Instead, I head out to Thurmaston and visit the T K Maxx and Asda (we need supplies for home). I nip through the supermarket, collect a few things and pay up before heading back.

I stop off at a quiet lay-by out in the sticks and swap my clothes. After that, it’s a dash back to work (we have shower facilities at the back of the building) and make sure all signs of slap have gone. No one sees me come in or leave. I open my smartphone and ‘zip’ up all the photos.

As I drive home, I think back to something some on Late Night Woman’s Hour said about fashion: that she craved some yoga shoes. I’ve no idea what these are, but on listening to Lauren’s comments, she said that what she actually wanted as the lifestyle that went with the clothing. To feel she had the time to go to a day session of yoga and that by buying the item, she’d move into that world.

Maybe that’s true for me and the new boots. If all the office folk are wearing them, am I buying into the idea (myth?) than I’m part of that crowd too? The working women who balance family and work. Or, maybe, I’m trying to buy my way into acceptance. Whatever it is, I can’t reach a conclusion, although I do think you should only buy something it you need it. And, wow, after all that time in heels, did I need them 😉

When I get home, no one says anything about ‘dark eyes’. or suchlike. My fear, so far, as been unfounded.

The next morning, I take the bug out bag out of the car and stash it back in the wardrobe. I pop my wig on its stand, hang my outfit up and think on the happy memories. Really, that what’s it about: not things bought, but memories made. A day out – a whole day out – in Lynn mode. No shouting, no pointing, just me going through the world and being left alone. I can dig that.

So, what, if anything can be learned from my trip out? Someone once said to me, that if you’re struggling, think of what you’d say to a friend and then say it to yourself.

Well, I would say? Okay, feel the fear and do it anyway. Take some time to be you, if that’s what you need. Don’t worry so much about passing or blending in. Just be yourself (!!) and relax. People are accepting in general and as much as we’ve read about the rise of hate, most folk are cool about us trans folk. If you do get stared at, just make eye contact, smile politely and watch them look away.

Oh, and walk slowly. Take an umbrella and think wisely about your choice of shoe 😉