This week has been somewhat unusual. Not just for me, but seemingly a large number of folk who’ve been following the American elections. What is the world coming to eh? I get that neither candidate was perfect and their faults, I guess, are very much in the eyes of the voter.

That said, some of the outrageous things Trump said, you’d have been sacked from most jobs over here. I can only hope that the piss & fire was mostly for show, and his term will be far quieter. Failing that, anyone who’s had the sheer rudeness* of not being born white, straight and male, may be in for a rough ride… and frankly, that’s wrong. I don’t give a toss about your politics, your religion or your excuses: if you’re discriminating against someone’s basic human rights, you need to have a word with yourself and start treating others like people, not stereotypes.

Okay, politics aside, with the Ever Lovely Mrs J being away with work, it’s been my task to be the working househusband. For the record, Mrs J works too, as do many families in the UK. Partly necessity (bills, mortgage, etc) but also equality. I’ve tried seeing if I can give work up, but apparently we need the money I earn. What a crock 😉

Anyhoo, I don’t mention the househusband thing, as poor little me, or as a brag; moreover, how do single parents manage!? I’m knackered! Plus I’ve had help from Granny J on two afternoons. To top it off, old Owly McNightOwl here has been going to bed early. What’s a bloke to do eh? 🙂 Seems I’m a lightweight, as I was talking to a work colleague and her husband’s often abroad (Royal Air Force), so this is very much her gig.

I had hoped to manage a spot of Lynn time midweek, but events conspired against me. Instead, I was looking after Little Miss and Wee Man, due to unexpected school closures. I was a bit miffed at my plans going south, but what can you do? It’s not like I could send them packing, so I could go out, that really wouldn’t be right. Instead, we took the dogs for a walk, played games and watched a film. A good time was had by all and it’s quite probably saved me a bit of dosh and given me happy memories too. Good stuff.

Talking of moolah, Chameleons have been looking for funding help keep the membership costs down. After withdrawing from a recent grant, due to the requirement for full personal details, we tried our hand with the Womens’ Centre. They – bless them! – have been very helpful and we’ve been awarded our request. We’ve not had to hand over our *ahem* real IDs and they’ve been nothing but accepting about our trans nature.

Not that I expected anything less, but there’s always that slight worry that you’ll upset someone because of their views. Anyhoo, such whiffs of fear were totally unfounded. Now, as the new back account just about sorted, I’m visiting one of they’re staff to finalise matters. Fingers crossed eh?

With autumn taking a cooler turn, fashions have understandably changed. I’ve managed not to buy new boots for ages, although I’m really liking some shoe boots at the mo. I’m wondering if I need them, or if shopping is just filling in the gap, of not being all of me. Tricky times. 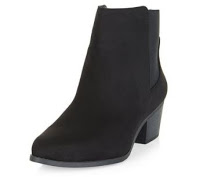 On the one hand, I wonder if I’m filling the trans void with retail purchases, because I can imagine outfits that would go with them. That and – to echo a sentiment made on Late Night Woman’s hour* – the idea of fashion helping me fit in and be part of the crowd. Sure, I’m a 6ft trans* person, but if I’m dressed well, does the former matter less?

( Late Night Woman’s Hour is the occasionally more adult version of BBC Radio 4’s Woman’s Hour. I don’t mention this ‘cos of “ooo, how femme am I?” nonsense, but I enjoy the conversation and the different subjects covered. It’s available via podcast or iPlayer if you’re interested. )

But, on the other hand, there are three more meetings at Chams. Two regular meetings and the Xmas do (fingers crossed!). Then, there’s, what?, another two meetings a month before Spring (is that six?) and you know my love of mixing items up to make a new outfit. Realistically, how much wear am I going to get out of a pair of oh-so-cute boots? Sigh…. Perhaps, I’m buying the dream, rather than the item. The dream that with them on, I’ll be like the other office ladies, and not a chap who’s trying.