This time’s Blogger Challenge is hair, which is, a complicated subject for trans people. Actually, no, nix that. Maybe it’s just my complicated relationship with hair. Maybe you’re fine with it. I shouldn’t speak on other people’s behalf. 🙂

Where was I? No, before the public apology…Oh, yes. Hair. Yeah. I used to have long hair when I was in my 20s. Full on, long straight hair that ran to the small of my back. I was – from an external view, at least – a rocker. But it wasn’t just about that. Having my hair long, it just felt right, somehow. I won’t say it made me feel girlie, that wouldn’t be accurate. But the idea of short back & sides at that time? No way, baby.

It was the 90s and I was young, so it wasn’t a problem. It was the grunge era and while I liked crusty rock, dreads? Not really me. I thought they looked good on some people, the idea of a bird’s nest thatch on my own noggin, didn’t rest well. If you could find pictures of my mates and I from *ahem* back in the day. There would be a few hoary metallers and then there’s the chap with the well kept hair. Self denial is an ugly thing, right? 🙂

Right now, I’ve got very short hair. I guess it’s strange in that I went from long, to short-ish and then pretty much straight to almost skin head. It’s weird, in that all those years ago, I would have hated to have the haircut I have now, but time and people change.

Going back to what I said about having long hair not making me feel – well, for want of a better word – femme? girlie? [answers on a postcard, etc], when I bought my first wig (a bob, if you’re interested), that did. I guess no matter how I styled my own hair, and yeah, I did try different looks here and there, I could never get by the block of that’s me, but with my hair done funny and that’s even with the right clothes and a bit of lippy.

No, a good wig with worth every penny. No, it won’t magically transform you….. except, in a little way, it does. 🙂 The right hair, will suit your face and will help push away your typical appearance, letting you look a little more like how you feel, rather than as you are every day. At Chams, my wig is the last thing I put on before going downstairs and it finishes my look. It is also, somewhat darkly, the first thing I take off, which marks the end of the evening and the time to return to bloke mode. I’ve seen other trans people do that little drop off the shoulders, when they take the wig off. Like I said, it’s complicated. 😉

I’m very much in the square face category, so I try to aim for styles that’ll help hide my Judge Dredd-esq jaw, if at all possible. As to wigs, I’ve mostly stuck in the darker brown shades and these are deeper than my own natural hair colour. I had a bob to start with, then a long almost black number, which looked awful on me, but great on someone I sold it on to. After that, I had a shoulder length ‘flicky out’ one with highlights, then on to a red/gingery number and now I’m back to shoulder length deep brown again. Good wigs aren’t cheap, but unlike a regular hair do, it’s easier to road test the look. 🙂

The Blogger challenge didn’t say anything about body hair, so I’ll skip over that. Probably best that I do, because I really don’t like having much of it. Unlike the long hair, which felt right, having a hairy chest etc, that doesn’t sit right. Would I get rid of my beard if I could? From a laziness point of view, if there was a single shot, inexpensive option, maybe, but there are times when I like having a furry face. Okay, not werewolf level, but a face full of stubble. Again, it’s complicated.
Oh, talking of hair. Congratulations to Conchita for winning the EuroVision. So cool to see her do that and even better to read my friends (who don’t know about me) commenting and accepting her via social media. 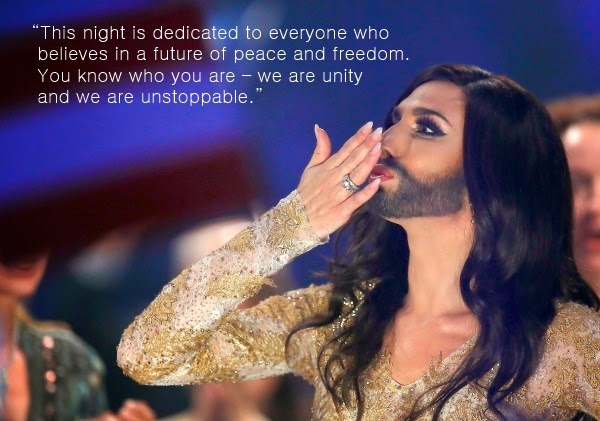