Another bank holiday weekend? I don’t mind if I do! 🙂 Oh, and it’s half term too, so an extra day with the nippers, will be time well spent. How are things with you and yours? All good I trust!

I would normally say, I’m not one for politics and if this isn’t your thing, do skip on to the next bit. There’s something about shoes and looking fancy. 😉

And they say the books you read as a kid, don’t influence you. 😉

Still reading? Okay, no, don’t worry, I shan’t be getting on to my soap box. Although I will be imagining that I’m sat talking to you over a nice tea (or coffee, if you prefer)…. It was, the Euro-elections this week and for readers outside the UK, this is where the British public vote on who we’d like to represent us in the European parliament. If you want a bit more of an accurate description of what actually goes on, do tap Google for a better, and quite probably, longer answer 🙂

I won’t be talking about who I voted for – not that it’s a secret – but I will be saying this. I’m disappointed in those who voted for a certain ‘independence party’. Said party wants nothing to do with Europe and seems to be the go to faction for whipping up a media storm about us losing our jobs to European people and that Europe interferes with how the UK Government runs things. They also, and I shall try to type this without getting cross, seem to have the monopoly on homophobes and racists. Oh, and there have been reports about reducing the laws put in place to protect mums-to-be. What they’d make of trans people like us? Well, I imagine nothing pleasant. If I wrote down a list of the things I’d never want a political party to do, I think pretty much all of this independence party’s views and ideas would be on the list.

What has annoyed me – other than the bigoted mutterings from certain members – is that some people in the UK are voting for these people! I want my country back, or this is a protest vote, or well the other parties are as bad as each other. Sure, the other parties are far from perfect, but given the choice between a party that actively discriminates against a wide spectrum of our modern society, I’d go for the others any day of the week. Hell, I might even vote tactically to make sure that said party won’t get in around here.

Okay, that’s my rant done. Over to fancier subjects 😉

This week, one of the longest attending folk – nay, perhaps even one of the original organisers – from Chameleons, Jane, has become seriously ill. She had a stroke recently, and as is often the case, one leads to another and another…. That seems to be the case here, as it was the case for my Granny.

Jenny kindly collected a briefcase from Jane, which contained lots of items related to the group. Important items, like the fund details and Nottingham Self Help contacts. But other things too. Items such as very old newsletters from Chameleons. Yes, we did used to run a newsletter called The Changing Times. I think I may have submitted a piece once or twice. Sandi, Val and myself had a good chuckle going through some of these items and keeping some, getting rid of others.

There was also a few newspaper cuttings and some newsletters from other trans organisations. Some were from back in the 80s and early 90s! Yeah, pre-Internet stuff kidz. 🙂 There were some pamphlets from TV/TS, who I think were the first trans organisation I heard about. That was in the late 80s on a late night programme called Hodson Confidential, on ITV. This programme picqued my interested because it featured Philip Hodson, who was the Agony Uncle on BBC’s Going Live (a Saturday morning kids’ show). Other than the occasional tabloid article on Soldier In Sexy Steamy Silky – or words to that effect, from Jane’s cuttings – Hodson Confidential was probably my first exposure to seeing that there were other people like me. People who liked dressing up, but who weren’t into it for the sex, and I think that really helped give me the feeling that if regular adults could live this double life, then just maybe, so could I. Hope, as the movie quote goes, is a good thing.

If any of you started cross-dressing, or whatever label you care to give it, before the Internet boom; where did you get your information from about it? For those of you who had the Internet to consult, did you find that helped, or not? 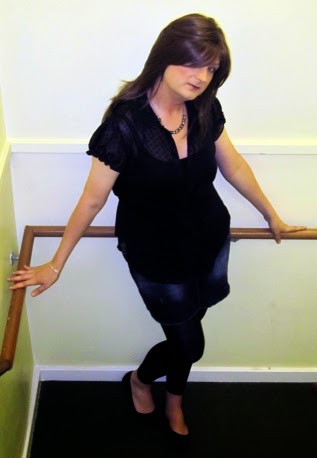 The Every Lovely Mrs J and I had a bit of a second spring clean last weekend. Never let it be said humans are not affected by their animal past 😉 I decided to thin my wardrobe out, as there were some items I was not going to get into, that I’d not worn for a while and Mrs J needed some dress space (following birthday treats from yours truly). Rather than send the items straight off to charity, I packed them up and took them to Chameleons, to let the group have first dibs. I did put a skirt aside for Tanya, a dress for Alison and some shoes for Kimberley (who’s recently started to come to the group and – by her own admission – doesn’t have much at the moment). The rest of the items were studied and any purchases made, had the money go into the group’s coffers. I had to change out of new sandals, as they were sadly too small, although – as per – I’d pack some other shoes just in case.

I had my eye on some new sandals for this summer. I’d seen some nice espadrilles in Tesco (not too pricey) and in my size. However, I’d left it too late and they’d pretty much all gone from our local branch. I had wanted these because they were closed toe (in a nice way IMO), which would mean less prep time when it came to Thursday nights. Anyhoo, I found some in BHS – of all places – and purchased a pair. They were an eight, so I was chancing my luck, despite having felt they were okay in the store. Seriously, if you’re a store owner and you don’t let men take shoes into the changing room, you are losing out on your trans customers! 😉 Come Thursday night and about half an hour in and I realised they were too small and they’d have to go back, which I did today and I had no issue returning them.

As The Ever Lovely Mrs J has been so cool about me getting my ears done, I was looking forward to trying some different earrings, rather than the studs I wear. Having got changed, I took my studs out and slipped in the new ones. To say I was happy with them, would be an understatement.  It might sound silly to some, but having pierced ears and pretty jewellery made me feel beautiful and accepted. Unlike my trusty clip-on earrings, these would move when I did, providing a little reminder I had them in and how lucky I am, to have someone like Mrs J. To top that night off, somehow, I felt that I’d got my eye make-up just right too.