Well, it’s been a while since my last post. How odd, I’m usually reasonably resolute about posting once a week.

Oops! That’s nearly a month gone by. How time slips by eh? Well, the Jones Massive have been away and I don’t blog while on holiday. Not for any special reason other than I find it easier to type madly on a keyboard, rather than tapping like a drunk woodpecker against the tablet screen. Yes, I know you can use Swype style apps, but they don’t have lead to some interesting spolling mistooks.

The Ever Lovely Mrs J has been saving up over the months and before Wee Man goes to big school, we thought we’d have a big family holiday. We decided to risk going to America. Now, I’m not one for long haul and as I don’t do well with a lack of sleep either, I was worried about the nippers. But, my worries were only that, as Wee Man and Little Miss did a grand job. We had the luxury of a flight on a new Dreamliner and not only was the flight faster than usual, but very comfortable and pretty roomy considering we were in economy class. All good stuff!

I won’t give you a blow by blow account of what we did – mainly as I’m still a bit knackered from the return journey. As I said before, I’m not good with jet lag. If Oscar Wilde could resist anything except temptation, I can resist most things except falling asleep when I’m slightly tired. Being both a parent and a night owl, that means frequently 😉

Where was I? Oh, aye, the holiday. We’d opted for Florida because of good weather, a pool, an inexpensive holiday home and it wasn’t too far. It all worked out brilliantly and a good time was had by all. We did get wet – sometimes due to rain and sometimes due to theme park rides. Oh well, at least you dry off quickly in the heat. There were lots of highlights: a swamp boat tour, a visit to an acrobat circus (with very cool BMX stunts), theme park fun, swimming with dolphins and a trip to Kennedy Space Centre.

Kennedy is, I think, something that will stay with me. I found the visit very…. I think the best word is probably emotional, or even moving. I was Wee Man’s age when the shuttle took off and while I missed the moon landings, I did catch the shuttle, the Hubble telescope, SkyLab and lots of other cool space stuff. Funny thing is, I wouldn’t say I was particular ‘into’ space, but maybe my sci-fi nerd core brings it all to the fore. Seeing the Saturn V rocket was incredible. Just the sheer size of the thing that took a tiny craft to another world. Okay, moon, but that’s a destination off this rock. 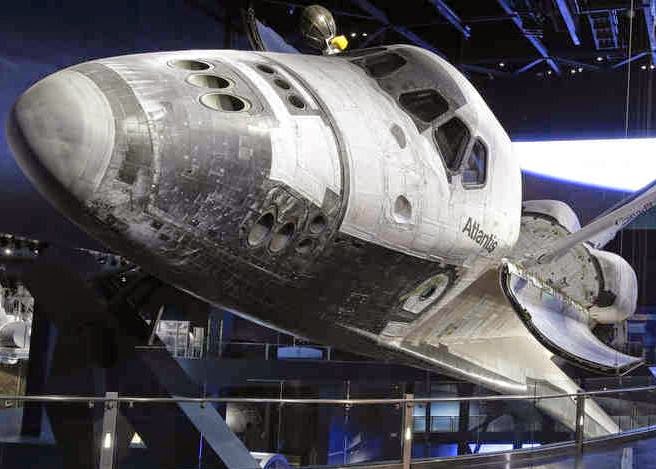 Later on, we got to see Shuttle Atlantis. Not a mock up, but the actual vehicle that made all those trips into space. Incredible stuff and again, I got this feeling that just maybe, if we could stop try to do each other in, maybe we could work together a little more and maybe, just maybe, we could keep doing these incredible feats and not by stuck on this lovely blue and green rock, we call home.

In a mildly T related comment, I did have the pleasure of keeping my earrings in nearly the whole holiday. There was a spot of shopping, in which I got a t-shirt, or two, but it wasn’t the sort of holiday for buying the fairer fashions.