The dry spell has been broken. Whatever biological or mental (emphasis on the mental 😉 ) block was floating in my noggin, seems to have relented and off I went to Chams the other night. Strange, after those few weeks of being decidedly, well, meh, about the whole trans thing, my interest was piqued and I found myself wanting a little fabulous time out. And so, with the generous smile of the Fates, events conspired with me and all was well….

Well….. mostly. I almost put the kibosh on the whole gig, by giving myself a razor cut Sweeny Todd would have been proud of. There I was, enjoying a rather warm shower – the warmer, the better the shave! – when I felt a slight tug on my chin as I drew the blade down. Uh-oh. There was then a drip of something very red against my chest. Bugger. I’m sorry to say, I had a little bit of a panic at that point. You know, that type of feeling you get when things seem to be about to spiral out of your control. But a few deep breaths and I switched razors and carried on.

But so did the nick in my chin! Agh! Oh well, best clean up and then hope a dab of tissue to the affecting area would sort it. Nope. Okay, plan B. Dab it dry and then apply some powder to it. Dab again. Wait…. oh. Fixed! Yes, Buttons, you shall go to the ball! 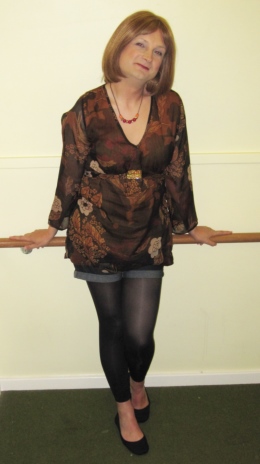 Bloke gear on and bag packed from the night before, I was soon winging my way up to the Centre. Despite being a little later than I’d hoped – completely my fault, I just faffed about too much – my plans for the outfit of the night went okay. I’ve not done the short shorts and opaques look before, but I was happy with it, that’s the main thing.

I did try taking some before and after shots, but as the lighting changed during the time between arrival and me finishing getting ready, I think I’m going to require a favour from someone with Photoshop-jitsu, to sort things out. That’s the only negative for the night – which is pretty minor, all things considered – and everything went very well. I had a good chat with the usual folk (Tanya and Alison) and caught up with some new visitors too (Hello Lauren!). Oh, I also did my good deed for the day, by delivering on my promise to paint Alison’s partner’s nails. She seemed happy with the free nail work and a number of folk were after the Blackberry shade from Boots. Maybe I should ask for commission? 🙂

If you were into conspiracy theories and The Man keeping his eye on you, this week seems to have been a good week for singing I told you so! For the record, and in a non-paranoid way, I thought that in some way, one of the main western governments would be doing it. But I was a little surprised at how deeply the American National Security Agency had been doing it.

Disappointed? Angry? Worried? No, not really. Given that I have a free blog hosted by Google and a Facebook account, from a corporate perspective, I guess my digital fingerprints are all over the Interwebz as it is. The main thing for me, is ensuring that I keep my Richard and Lynn digital histories part. Not because of any shame, but more to keep family life away from my trans-life. Something we talked about at last night’s Chams – the awkwardness of keeping secrets.

I guess by know most of you know I work in IT, so my attitude to logging is a bit mixed. On the one hand, the necessity for an organisation to keep an eye on its web traffic is useful. Most of the time it is there to protect the company from individuals thinking they can do something illegal and the company will take the hit (no, that’s why companies have a web use policy). Should said logs be used to see what people are up to? No and from conversations with the various security managers I’ve spoken to over the years, they don’t. A) they’ve got better things to do with their time, and B) it would be an invasion of privacy. Instead, they keep the logs for the rare occasions when someone blows the whistle (“Fred’s been looking at dodgy sites, guv!“), or the even rarer occasions when the police call.

There are main three areas where the NSA logging situation bothers me. Firstly, from what I’ve heard on the news, there doesn’t seem to be much in the way of the data being at arm’s length. What I mean is, they are free to read the data when and how they like. Using it real time (as much as you can considering the volume of information we’re talking about) and after the fact to catch crooks, seems okay. However, the more insidious use – a bit like a scarier version of Facebook Ads 😛 – where you start profiling your civilians; that I find worrying. Is that happening now? I couldn’t say. I guess the debate in America will run on.

The other part, which is the line many of the big Internet companies rolled out: “we don’t give them direct access to our servers.” Well, given the highly distributed nature of these web giants, I can’t say that would be particularly helpful and to be honest, if I want to gather data (many patching levels) from servers, I don’t visit them directly (there’s just too many). No, I get a software agent to do it for me, or if that won’t work, I ask the Server Team to work on it. In other words, a simple request. Perhaps said companies were not allowed to state how the NSA get the information. I did read that Google took requests – no, not singing ones – hey, do you know the tune “Trousers and Firewalls Down It’s The NSA”? 🙂 – and then fed the data back, either via secure file transfer or even in print outs.

The last part is that the weakness in most systems – oh, Linux users might like to yell “Windows!” at this point 🙂 – is the human element. Sometimes we sysadmin folk, we do dumb things. We leave USB keys in a machine, forget to change the default password on a new appliance, or we save a file in the wrong place. It happens….. but most of my stuff is project related and is not a person’s personal metadata.

So all in all, I am worried? If a government agency was mining the data – to use a geek-term – to categorise its citizens, rather than using it to search for criminal activity, then yes, I would. This problem isn’t going to go away and given the success of some of the hackers out there, I wonder what else is lurking in the darker recesses of security agencies? I’ll leave that one for the X-Filers.