Seems I’ve moved on from ‘meh’. What’s this two posts in as many days? Well, strike while the distress is hot, I say.

These last two days have been less than ideal. Not that anything bad has happened: my loved ones are all safe, there’s no Great Disaster looming….. well, I hope not. I know Kim’s thinking about kicking off, but really, just calm it down chap, okay? It’s not going to end well and really, a war? C’mon. Save the big talk and sabre rattling for another day. Turn the nuke plant off – unless you’re running the country’s AC with it – and have a look at Dorothy Perkins’ new stock. You’ll feel better for it. 🙂

Saturday, Little Miss and I went to a party for one of her school friends. Again, it was at the village hall and we had the usual routine of music, balloons, fancy cakes and party games. This time I wasn’t token dad, there was one other chap – looking equally lost and a little out of place. Normally, these things don’t bother me. I guess…. I don’t consider myself a regular bloke. Atypical, yes. Regular, no.

With spring finally here, it seems it was time to break out the new wardrobe – well, for the ladies, anyhoo – and I think that wasn’t helping matters. The negativity within seemed to clutch at this as ‘look what you cannot have….pretty things!‘ Cue ten second daydream of being Lynn while at the party. Thanks, Inner Golum. I really needed that. >:-| I did my best not to think about the negative stuff and instead, pass the hours by drinking tea and playing games on my smartphone, while Little Miss enjoyed herself.

Sunday…. after a lovely stroll in the park. Well, stroll for me, a bike ride for the kids and a good run for the hound. BTW, proper hound, not the Black Dog. Lunch and then a quick pop to the shops. The Ever Lovely Mrs J needed to call into Boots first (don’t look at the make-up, Lynn) and then a look through Outfit for some things for the holiday (don’t look at the clothes, Lynn). I took Wee Man into the men’s area because…. because, I thought it would be more interesting for him and it would be better if I wasn’t near temptation. Just put it all behind me and look at the Quicksilver t-shirts.

Back home sometime later, I retreated upstairs to leave them all at it. I did my usual coping mechanism: twit about with my phone and try to distract myself. Think of the now, Lynn. Enjoy the moment. Things were not right in the state of Denmark. I was angry at myself and I was hurting…..

But why? How had I arrived at this state? It’s not like I’m cooped up in the closet. With a little luck, I’ll be out this Thursday and it’s not like the Ever Lovely Mrs J and I are in a bad way. It really does feel like a flap over nothing….. only….. why, when the Pink Fog rolls in like a camp remake of the The Fog and sinks its claws in, why does it hurt so?

Does it only hurt if you let it? 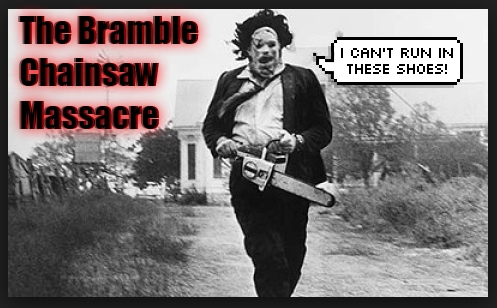 I put the phone away, put my wellies on and took action: it was time to break out the sheers (no, not the fabulous ones – garden sheers), sharpen the axe and sort out the bramble patch. Lord of the Flies meets Alan Titchmarsh. Judgement day cometh, brambles. I have gloves, safety specs and a mood you could cook a chicken with at thirty yards. Bring it! 😛

Three hours later, the bonfire was roaring away nicely. My muscled ached and Little Miss had had many a happy hour on the trampoline. Chuck in the mix that I’d not thought about being a miserable c*** for three hours and that’s not a bad afternoon all things considered.

I don’t like these occasional emotional mosh pits. But, there is good news in the above. With the CBT stuff, I know it’s not the End of the World. I’m not sliding back down the walls of the pit. It’s just a bit of bad luck…. a Series of Unfortunate Events if we’re going for a book and film tie-in. 🙂