Or more accurately, gender politics….. not that I’m particularly politically active. I guess I’m just not 100% content with the current two party system. 🙂 Sh**! I’m the LibDem option of gender! 🙂

Too late to say hi? Hello, it is then.

It has been a rather eventful week and pretty much all in a good way. Well, mostly, but we’ll come to that later on.

After last week’s dysphoric disco of distress I would like to report that I had a very good day today. That may not mean much in the great scheme of life, but to Yours Truly, it means a great deal.

There was no rush to school – it’s the Easter holidays – and the drive in to work was smoother than a posh pair of tights. Top that off with a meeting being cancelled, meant I had a morning back to catch up and dare I say, all has gone well.

If part of my good mood is due to the very pleasant evening I spent with the Chams crew, I’m certainly not going to inspect the proverbial horse’s orthodontic situation. 🙂 Sometimes, you’ve just got to enjoy things as they are…..

Which brings me on to a Only Now Do I Get The CBT Concept moment. Feel free to sing that last bit or make up your own Intel-esq tinkly musical bit. I shan’t. I couldn’t hold a tune in a bucket, but you can’t have it all. 🙂

So, ‘The Moment’…. It was down to me getting into a bit of a flap about setting off to Chameleons late and arriving about half past eight. To me, I look at the clock, add an hour on for getting ready and then there’s a little drop of the shoulders, as my mind works out how long I’ll actually be there before it’s pumpkin o’clock and I have to de-fab.

The (now) obvious thing is to enjoy the moment. Not to worry too much about how long I’ll take to get ready (Ed: the journey, not the arrival, Lynn. Or more poetically: ‘to travel in hope’ as a wittier person once wrote.) and that it’ll be ‘just two hours’ of Lynn time. 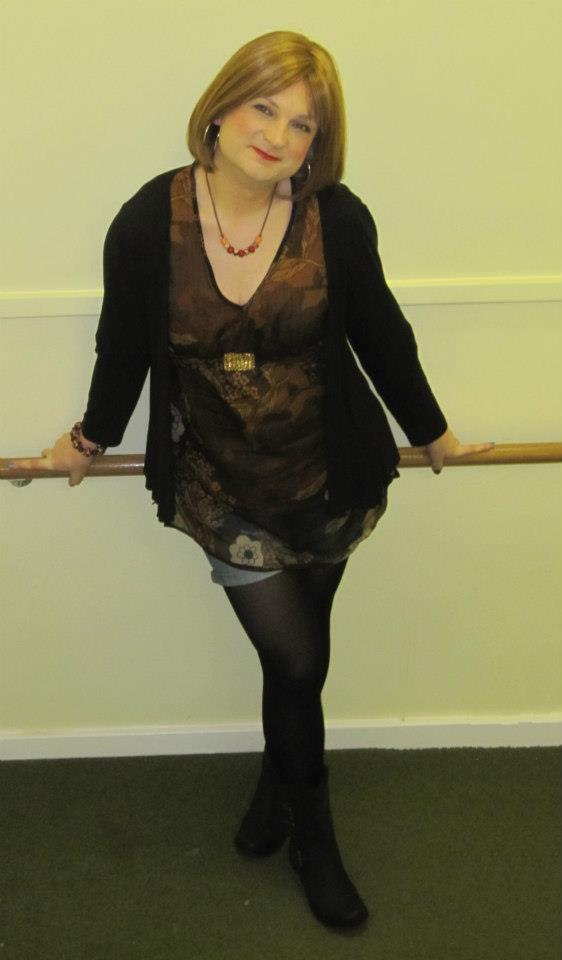 I found last night, that although I was late getting in. It wasn’t really the time that was the problem, it was my interpretation of it. I wonder that with the previous years of taking Little Miss to Granny’s house, has meant that I’ve been lucky to arrive earlier than I would do (by an hour at least) and that I’ve got used to doing so. Now I’m arriving at a more typical time, I’m panicking over clock watching. Which I think, is not a good way to spend an evening. It makes me very tense and not very pleasant.

Soooo…… deep breath and try to think of the good things. Think of the times when I’ve done my make-up and felt happy with the look. Also, when my over-packing has somehow paid off, and for me, my outfit is working. Those moments, the ones when you look in the mirror and think, That’ll do, pig. No, that’s not right! Ack! 🙂 Those moments when for just a moment, you look and are content – even happy – with your image.

Two things about music this week, three if you count the usual lyrical reference.

Firstly, and more a personal one, I’m a little surprised at how my mood affects how I listen, or more accurately, interpret lyrics. Two good examples are Nine Inch Nail’s Leaving Hope and Katy Perry’s Just Like the Movies. Yeah, I know. Katy and Trent on the same playlist, it is unusual, but so it goes. Yesterday it was Public Enemy followed by Lady Gaga.

With both songs, if I’m in a good / steady mood, I find NIN’s track beautiful and haunting. The piano parts lift my soul and while I’m not usually a fan of the slower, more ambient tracks, I keep coming back to this one. Likewise, with Miss Perry’s number; sure, it’s a little poignant here and there, wistful, but not sad.

However, on a downer level, what was haunting, becomes melancholy and the words of Just Like the Movies, somehow they twist and turn in my head so they become about what I’m not feeling so good about. Take for example, this… and I hope there’s no issue with copyright.

It didn’t fit, it wasn’t right
Wasn’t just the size…

The fairy tale feeling, no
Am I a stupid girl, for even dreaming that I could?

A body that doesn’t always fit the way I feel and dreaming that I could? Sometimes, those words hit hard. Melodramatic? Maybe 🙂 But when things aren’t going well, it doesn’t make them feel any less true. But, if I put my feeling to one side and think about what I really want and where I am now, they’re just words. They’re not a siren call to me, they’re about something else entirely and just maybe, it isn’t just like the movies. There are dull bits where not much happens and the long, slow burn of good things, peppered with great events.

Get the girl and kill the baddies? Maybe I have and I’m riding this one to the end credits. Again, to travel in hope and all that.


For those of you who’ve been living under a rock this week, one of the UK’s former prime minsters passed away. It’s been a long time since Margaret Thatcher was in power, but judging by the vitriol – from supporters and detractors – you wouldn’t have thought so.

I can just about remember the Labour government from the 70s, I guess I would have been at primary school, but I don’t remember the strikes, nor the power cuts. Skip on a few years and we had the Miners’ Strike, the Poll Tax and – to a lesser extent – Clause 28. All of those, from my sheltered middle class rural backwater upbringing, have shaped who I was. I could then, as now, see both sides of the arguments about the economy….. and that doesn’t win you many friends when it seems that there are two camps: those that loved her and those who hated her. 🙂

As to Clause 28, I might be straight, but why shouldn’t teenagers be educated about different sexualities / trans* people? This was the era of AIDS and it seemed to me, that everyone was protesting against the government. Gay people wanted acceptance, rap was trying to break into the mainstream, ravers wanted to dance and most of us didn’t want to pay the Poll Tax. 😉 Things have (thankfully) moved on since then and society is very different as it was in the 80s. In some ways, the teenies and the noughties seem a lot calmer…. well, at least to me, but it’s quiet out here in the sticks. Are the battles of equality all won? No, I think we’ve got a little way to go yet, but we’re getting there.

There are two things that amuse me – in a wry way – about the whole affair. The first is the attitude that she was universally reviled and while she certain gave people a figure to fight against, the Conservatives won many elections with her at the helm. In the end, her own party turned against her and managed one more term, before losing out to Labour in the 90s.

The other element is this attitude that you shouldn’t speak ill of the dead. Yes, I think there is a time and a place for comments, and yes, what about respecting her family’s grief, etc. True….. and yet, here comes the other side. 🙂 Margaret’s supporters are busy proclaiming what good she did for the country. Then there are her policies that had a great deal of an effect on people’s lives in the 80s. To some, she let them ride the economic boom (was that government policy or a world thing?) and become upwardly mobile. To others, her policies drove them further down the wealth ladder and many folk argue that those who worked in manufacturing / the coal industry, never recovered.

I’d like to say, history will show us the facts, but what is the truth in those situations? It is possible to look beyond your own memories and views, to look at the event as they happened? Should you let go of the past and move on, or are some events just too hard to forgive?

[ Today’s lyric: Music & Politics by the Disposable Heroes of HipHoprsy ]