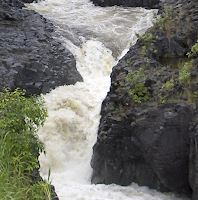 When the river runs wild, there are a few choices: Stand tall and brave the rage of the waves. Brace against the worst and hope your feet are not pulled from under you. You can let go, follow the flow and try keep your head up. Or you can let it wash over you and pray for the end…. although I wouldn’t recommend the latter.

I don’t know why I’m writing the above, but I thought it sounded nice. Maybe there’s something rattling around my subconscious at the mo. Whatever it is, it’s not coming to the fore. Anyhoo, the above was kicked off when I looked at my desktop’s wallpaper. Funny how inspiration strikes you. I mean earlier on, on the drive home, I was feeling tired and in terms of creativity, pretty much feeling flat broke at the ideas bank…. to torture a metaphor or two.

Talking of creativity, this week, the BBC ran a news story about the link between mental illness and creativity. That old addage about genius and madness I guess.

Will Turner: This is either madness… or brilliance.
Jack Sparrow: It’s remarkable how often those two traits coincide.

So perhaps the occasional dance with the nut fairy (no, not nuts as in your know what. Honestly 🙂 ) or rare visit from the Black Dog are not – dare I say this – always bad news. Perhaps the over-thinking – which I’ve heard can trip depression – can be useful from a writing point of view. I know my imagination has always been a bit over-active, but if / when I can channel it appropriately, it has lead me along some interesting (at least to me) avenues. well, at least from a writing pointing of view (short stories, not blogging I should add). Despite being generally academically lacking during my school years, I find I now enjoy writing for myself. Even blogging to a large extent. I mean, it’s not like I get paid to prattle away each week…. and given the general quality of the posts, perhaps it’s a good thing that I don’t make my living this way 😉

What about you, dear reader? I’ll pass on the blogging bug seeing as you’re here, but what about from a creative point of view? Do you harbour any talents, hidden or otherwise?

Righto. I’m off for a nice long soak in the bath… but please, don’t imagine that. It’ll just give you nightmares. 🙂

Oh, as I re-read this just before hitting the Publish button, I wonder if there’s another choice when stuck in the torrent: pull together and help each other. There’s a thought.

[ Today’s lyric : The TimeWarp from Harry Potter and the Unexpected But Utterly Fabulous Crossover with The Rock Horror Picture Show ]