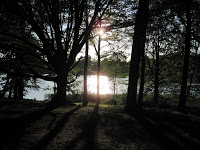 Summer holiday time this week and very welcome it was too. A few days away from the rush of work and a chance to ignore the List of Stuff To Be Done on the fridge (home) and monitors (work). Instead, time to wander through the countryside, let the kids play without having to watch the clock and, if I’m lucky, to ponder life, catch up on some reading and generally do note* for a week or so (* Ed: for our visitors, note is a corruption of ‘nowt’ which in turn is a northern slang for ‘nothing’).

Earlier this month the Jones Massive went off to a party. It’s not something we do regularly and it was with a number of the Ever Lovely Mrs Jones’s on-line crew. You know how it is with modern friendship; some people you lose track of, you catch up via Facebook, or bump into them in the street and swap mobile numbers. Some friends you only know on-line (waves hello) and yet you can know more about them (I’m talking really personal stuff) than you do your long standing ‘real world’ friends. Strange that, I guess. The lack of physical somehow opens the gates to more personal secrets….. although from conversations with the Chameleons Massive, I’d say that’s not 100% accurate. Perhaps it is more telling of my traditional male friendships that they are more stayed? But more on that later. 😉

Anyway, said do was a few motorway junctions away and in a hotel to boot, so no worrying about leaving someones house in a mess, nor bugging their neighbours. It was (IMO) very good and as I commented on BookFace, while I wasn’t the only dad there at the start; at the end, I was. I was also the only dad joining in with the dancing. This, of course, will not be news to anyone who’s been on a night out with me. When it comes to cutting some rug, I am incorrigible. Sorry. 🙂 Both Wee Man and Little Miss lasted until the clock struck midnight. They also – bless them – got stuck in with the dancing on the tunes that they knew.

A few things struck me about the evening, both during and afterwards. Firstly, everyone (well, bar the scant handful of dads) had made an effort. Fancy outfits, killer heels and well applied make-up. I think that was in part because – and please excuse me if I’m wrong on this one mums – that when you become a parent, you can get a little lost if you’re not careful. You slip from being you, to always being mum or dad. Perhaps that’s part of the fun of Thursdays for yours truly? Don’t get me wrong, I love my kids (like many parents do), yet a night out when you can live a little and drop your guard is a great feeling.

Another thing that gave me a secret smile was the reported comments (via Mrs J) about “her lovely husband” who is “so good with the kids” and is “a good dancer.” where good for the ego. Now this bit did get debated on FB, so my apologies for the repetition. I do get a bit embarrassed by such compliments, but I guess like most folk, I’d rather hear nice things said about me than “who’s that baldie bloke with the big bum and the funny eyebrows?” 🙂 Yet a little bit of me still feels a fraud because I wonder how many women would put up with a trans hubby with occasional depression? Sickness and in health, etc? I’m not perfect, but at the same time; there are worse martial sins – or so I’ve heard.

I guess from the outside (and those without T-radar) think all is perfect between the Ever Lovely Mrs Jones and I. Friends have said it, my sister’s said it. Don’t get me wrong, it’s great. We have managed to make things work, but like all couples, we have our arguments. That’s how things work I think.

However, I am far from perfect – the trans stuff, the depression and the occasional time when I forget to be a good person and I act like an insensitive twit. I suppose if you take a look at most relationships from 10,000ft, it all looks normal and if you’re not sure about your own relationship, that 10,000ft view of someone else’s, things look advert perfect. Then again, maybe being a trans-husband has positive points: I wasn’t on the perv, I know that heels = pain, always look a lady in the eye, looking good takes effort and a genuine complement about your outfit can make an evening.

Lastly, and hence the title for today’s post (Secret Garden), I was added to a forum group so I could share the pictures and videos of the night. I do feel that there’s a stereotype with us trans folk – well, at the cross dressing end of the spectrum where I stand – that we do like to use the camera a lot. I’ve been through that one in a previous post, but I will say, I felt a little less…. guilty?… a bit more… vindicated… that it was okay as the cameras where out in force for the party. Again, like us CD folk, there were photos of before (freshly made up), during (chat, drinks) and after (glowing profusely and hoping your lippy’s survived).

I also had a roll through the previous posts in the group, Just like us, there was much talk about what might go on, dressing ones age, finding something – anything! – that felt right, fitting in, does this outfit work?, etc. I guess there are somethings that are universal….. provided you’re female or somewhere on the trans spectrum. 🙂 Glib comments aside, although I am an interloper – hell, I’m a bloke after all – I felt in a little way that I fitted in in some small way. Not sure the girls will be ready for me to turn up in Lynn mode for the next party, but a t-girl can dream right? 😉