Well, I’ve faffed about long enough, I guess I should get my brain into gear and rattle (Ed: prattle?) off Friday’s post. 🙂

The week’s been short as I’ve had a few days off for childcare purposes. To be honest, it’s be fun – if a little full on – to spend time with Wee Man. He seems to be growing up so fast, a cliché I know. He was chatting (at length) to me about comics and computer games. I did wonder if he’d like some graphic novels at some point. Pretty sure Watchmen et al won’t be suitable, but I guess there’s a wealth of said material out there.

In other news, last week saw the release of the BBC drama series Accused, featuring Sean Bean (yes, he of Borromir, Sharp and Game of Thrones fame to name but a few parts. “One does not simply walk into Mordor, unless the shoes and frock are just so!” 😉 ). For those of you who’ve not seen the episode, SB plays a character called Tracie; yes, a transvestite. Whenever I’ve seen him act, I’ve enjoyed Bean’s work and maybe that’s because he doesn’t play the character by the book/script. They all seem – well, from the ones I’ve seen – have their own little quirks and…. depth.

So with a chap like that in the cast, I was wondering what I’d make of it. The show is, ultimately, about a murder (a gruesome one at that, but not her nor by her, as way of a change) and as I’ve said to other (T) friends, Tracie is a character first and foremost. I don’t think she’s there to represent the trans community, any more than someone from Sons of Anarchy represents bikers. 🙂 But that disclaimer aside, yes, I think Joe & Joanne Public are going to look at Tracie and those who don’t know anyone trans, will, I guess, draw their own conclusions from it. I guess that’s the nature of the beast. That slight niggle out of the way, I read an interview which had this little gem in it:

“I think we have a perception of transvestites all being the same, as one block. It’s not one mass or tribe. Everybody’s got a different story. I thought that’s something I never knew before – you just categorise people.”

I guess looking from outside the community, we trans folk are all the same: we’re just blokes in dresses or women in baggy tops trying to pass ourselves off as the opposite sex….. which, I don’t think is really the case. I mean, the other night, I was talking with Sam and Sophie about the sliding scale of gender and also how the whole trans gig – for want of a better word – doesn’t seem to be about transvestites & transsexuals. It seems much more fluid with some folk dressing up once in a while, some doing it for kicks, some doing it for fun, some going full time and some transitioning (aka gender reassignment). Those who transition, some stay within the trans community, while some go ‘stealth’. Variety, eh?

The good vibes from last week’s holiday have continued and despite efforts from a few choice twits at work and a broken mower, things remain good work-wise. Not only have I enjoyed some time off with Jones Junior, but I was lucky to source a new (well, new to me) computer from work’s recycling initiative and enjoy a good night out at Chams too. 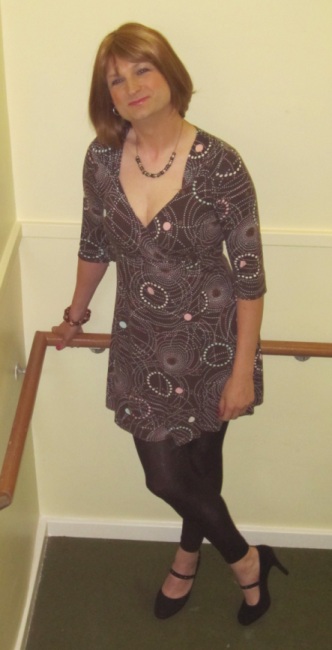 I had a lovely long chat with Pat as we got changed upstairs. I did have a slight wobble as I couldn’t quite seem to get my head around how to do my make-up. Hell, it’s not like I’ve not been doing it for years. It’s odd though, there are times when I finish my base and powder and it’s that gap between eyes, cheeks and lips that I seem to struggle. Perhaps its because I can see my “bloke image” so easily and it’s the change in eyes that has, for me at least, the most dramatic effect (well, other than donning the wig). Alison was kind enough to sort out a photo for me, bless her.

The weather was nice and cool too, so that helped. I’m a bit concerned about how life is treating two friends, but with luck and time, things will settle down for them. You do what you can about trying to be there for people. I think it’s a fine line between being there and being nosey. Hopefully, I’m not nearing the latter.

Okay. That’s me done for another week. Here’s to a long weekend as it is a Bank Holiday this Monday. Oh, one final thing, Vanessa – the lady behind the rather good Crossdresser Heaven website – has been asking for volunteers. Well, somewhat foolishly, I’ve volunteered. All I need now is to think of something to write about! 🙂 Perhaps an extra strong cup of tea and staring into space will do the trick. 😉