Today’s post is live and direct from the top of my head. Nothing like winging it to give a completely unstructured and somewhat disjointed blog post. Mind you, I’m assuming you don’t come here for quality writing. 🙂

In the main, this week’s been kind to me… which makes for good news. I did have a bit of a grump earlier on, but in the big swing of things, you have to let some work stuff just go and move on. You can’t win them all. Sure, I guess you should aim to make things work, but equally, I’d say that at a certain point, you need to stop, rethink and if necessary, admit that some things – technically or politically speaking – just aren’t going to happen.  Skip on a few nights and I couldn’t quite see what all the fuss was about. 🙂

Dark skies are not forever

Midweek I had my review appointment with a counsellor and it seemed to go well. I did go through a few of the same questions my doctor asked, but that’s to be expected and not a big worry. I did clam up and then the tears came suddenly when I was asked….

Funny thing is, I don’t feel that I should worry about the reply to the question because this – this blog – is supposed to be warts and all (Ed: you can get cream for that). Yet here I am dilly-dallying around the answer because… because I’m… embarrassed by the answer. Deep breath.

I was asked “have you though about ending your own life.”

It took me a moment to answer, just as it’s taken a moment for me to put the above line on the page. The answer, was yes; I had considered it, but not now. Only when it [the depression] was at its darkest, did I think about it. Before you panic, that was then and a lot has changed. It was also one of those ‘what if?’ moments where – and I do this mental exercise quite a bit – what if I do X? What would happen? What would the consequences be? So it was with suicide too. It would stop the pain, yes, but I would not be here. Yeah, to state the obvious, but then logic when you’re ****ed up do not make easy bedfellows :-). Did I plan it all out? No, but I had thought about it and no, I’m not saying this for sympathy. I’m mentioning this because if you ever feel that way: talk to someone, anyone, please. There, that’s my Xmas wish that any of us don’t go down that route.

I was then asked, “why didn’t you?” and there’s two elements to that. My first is that a few years ago, I remember reading about a young chap who topped himself, leaving behind a wife and two kids. No doubt the gent in question was suffering greatly, enough to drive him to such an act. As I sat in the car some twelve months ago with the wind and rain beating against the window, the memory of that article came back to me. Family. I would not let this… illness?… take me away from them. Yes, it’s my life, but to put them through that, it was the proverbial slap in the face I needed to get myself together.

The second element was something I’ve mentioned previously. When things were really bad, emotionally, I was a mess. Perhaps oddly, logically, I was with it. It was almost as if the logical side could say “Yes, it hurts. Really hurts, but you can beat this. Don’t give up.”

I guess it was right. Life moves on. Things get better. I get better and with help, I’m getting better each day. Although I can remember those events – that day sat in the car just numb – emotionally, I can’t connect with what went on. It’s a bit like…. walking out of the woods. Leaving a cold forest and as you walk into the sun, you can feel the shadows falling from your back.

That or I’ve had too much cheese before writing this. 🙂

So, the upshot of all of the above is I guess I’m due to have my head examined by a professional. I don’t think anything will happen before Christmas, but I’ve got quite enough to be doing between now and New Years. I think I’ll need January as a rest month. What about you? All sorted yet? Larks, I’ve not even begun the wrapping.

Those of you with eagle-eye action will have noticed the email form buried someway down the right hand side menu. It’s funny – and not so much funny-ho-ho – that most of the comment traffic comes in via the comments feed and that suits me just fine. After all, I like to think of this blog as a place to chat about stuff. Where was I? Oh aye, contacts. Well, this week I’ve had a sudden rush of folk writing in. None of it trans related per say. Two were marketing firms and I’m a little confused as to how I’d be able to assist, but that’s more me being a numpty.

The other two were from two bloggers, so if you fancy a read of something different – different from my navel gazing and wardrobe wanderings, there’s The Gay Stage (which is theatre / media news from a LGBT view) and the Slope Show which is a about a lesbian comedy. Seriously, go take a look, you might enjoy them! Oh, one last thing, I had an email from the Transgender e-bulletin and the findings from their survey are now on-line (well, that and other news!). 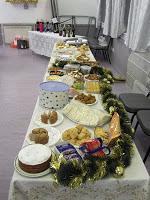 Moving on to jollier news, it was time for the Chameleons Christmas party. Owing to a slightly overlook on the planning department, we had to do much of the “who’s bringing what” game on the forum. Despite my slight worry that we’d have half a loaf of bread, eight sausage rolls and a cake to feed thirty of us, my worries were for nought and everyone pulled together. The tables were very full and it was lovely to see so many home made treats. H had made a lovely cake – which I missed, rats! – and there were some yummy roasted veggies and very tasty treats.

After getting changed upstairs – including the very careful application of my new tights – it was downstairs to help set up. Luckily I’d remember a knife to carve the french sticks I’d brought along and with the weather being so cold, it kept the chilled items suitably cool in the back of the car. Not that I enjoyed fetching them in the blustery weather.

As a bit of a change, I decided to forgo nail varnish and go with the false nails I’d won in a previous raffle. Honestly, I don’t know how women who have long nails get anything done! Now I remember why I stick to just pretty colours rather than a longer length. Still, no visitors were harmed during the food prep. 🙂

I’d wrapped a small gift for Tracey and Sandi as a thanks for all their hard work during the year. Yeah, I do a little bit with the emails and web site, but between them, the admin – paying the bills et al – gets done without any fuss, so I felt it was only right to pass on a note of thanks. Sophie, the wee minx, surprised me with a card and small pressie (Ed: I wonder what it is?) which was both very nice and very unexpected. Then Amy did the same and I felt thoroughly spoilt and very pleased at the same time.

I had remembered the laptop, so we had a few tunes as background noise – the real dancing didn’t start until much later. There was plenty of chat, time to catch with old friends and new visitors (Hi Melanie!) alike. We had the obligatory raffle and I won some chocolate for my Dad.

As we had a late night extension, there was chance for a spot of dancing and Tanya had me in stitches with her big-box-small-box-light bulb rave spoof. It loses something in the written vibe being a visual gag. Anyways, much fun was had and my tights did manage to survive the evening.

Alison was kind enough to provide a quick snap of my outfit and the dancing meant I got to road test (?) my shoe boots. Fingers crossed all goes well for Nottingham Invasion next week. I just hope it’s not quite so windy and cold! 😉

One thing about the self-adhesive nails, there came off quickly and a lot less of a faff compared to removing polish. Oh the vanity! 🙂

[ Today’s lyric: Marry the Night by Lady Gaga. Currently my tune du jour – (soir?) – and I did enjoy dancing to it. ]