Crikey, Friday already! Despite a brief panic over household funds (well, mainly by me!) within the Jones household, all has been well this week. It seems we may need to tighten our collective belts as food and fuel prices continue to rise like a politician’s schoomze fund. Without wanting to sound like a big head, our combined incoming isn’t bad, so for those who are less that flush, things must really be starting to bite. On the upside, we don’t get paid in Euros. 😉

It was the Chameleons Halloween party last night and rather good it was too. We had a Chinese meal and Sandi & Tracey did a top job of making the place look very nice. Rather than the usual row of tables, we had pumpkin lanterns*, tablecloths and fancy lights for the disco. Yes, I did bend a few ears with my choice of music, but I did try to keep it fairly mellow and it’s not like I didn’t offer other folks the option. 😉

( * BTW, the lanterns were kindly donated to Wee Man and Little Miss. They spent the evening turning all the lights off in the house and having their own ghost hunt. All very cute! ).

The only snag for Thursday was the new early evening tenants. The rooms the group has booked are outs from 7.30 and there’s a Karate Group who use the gym facilities until just before 8. They’re a cool bunch and we get on just fine. However, another group – who shall remain nameless – have booked the Centre’s hall up until 7.15. Fine by us and really, none of our business… unless said group are a) overrunning and b) making transphobic mutterings. They overran into our last meeting and we gave them the benefit of the doubt. Sometimes stuff does lag and five minutes: is it worth getting into a flap about? Anyways, this week, they were taking the liberty as it wasn’t until nearly 7.45 that they left and when the did, it was in a defensive huddle as if they’d be set upon by murderous crossdressers. 🙂 I’ve had a word with the Centre’s organiser – a lovely lady – and she’s going to explain the rules over booking. It was good to hear that we’re – and I quote –  “part of the furniture” and that we’re no trouble. Hell, we tidy up, pay on time and there’s never any funny business. Trans folk eh? How bloody dare they 😀

On to better news; the evening went well and it was good to see a few new folk coming back for another visit. Debbie mentioned that a member of her family was a dab hand with a camera, so that’s something to consider for another evening. A group portrait would be good and much as the one on the main site is a top job, it’s been there a while and an update would help the main site. The only snag is a decent background, so I guess I’ll be hunting for either a loan backdrop or another big sheet! 🙂 I said a brief hello to Vanessa (who came dressed this time around) and then another hello to another Vanessa who came for her first visit.

As it was a party night, I decided to rev the make-up up a notch: sparkly eye make-up and fluttery lashes. Certainly not a daytime look, but it was Halloween. 🙂 This evening’s outfit was the purple dress that I thought I’d fixed last week. It seems that while my needlecraft isn’t too off the mark (Ed: you big Mary), I did miss two small gaps in the seem. It being a bodycon stylee, yes, they did show on occasion. Oh bugger! 🙂 Still, I wasn’t the only one with dress issues: Maddy had bought the wrong sized tights, so I gifted her with my emergency pair of opaques. In return she passed along some shoes and the Ever Lovely Mrs Jones liked those. We had a good old chat about this, that and the other which was great. As I mentioned above, we were late getting downstairs because of the other group overrunning. Again, I wonder if being less-that-typical makes you a bit more sensitive to other folks’ concerns? So we held back coming downstairs until they’d cleared out. No biggie, but a bit of a pain as I’d hoped to help Sandi & Tracey set up. 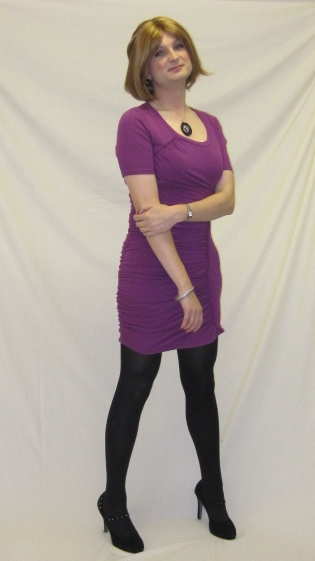 The evening went well and despite no Alison (away on business, according to Jenny), I caught up with other friends. Sophie was sporting a very nice necklace (Ed: not just a new necklace, she had a dress on too! 😛 ) that she’d been sent for her birthday, Sam gave an update on how things were going with her Dad (see here and good luck Mrs!) and it was nice to catch up with Rebbecca. A irregular regular as she once described herself. Val was doing her best to capture the evening on camera, although the cheeky so-and-so papped me eating (Ed: never a pretty sight at the best of times!).

Raffle done – I won a handbag charm and two boxes of false nails (something to re-try I think) – and pots & plates tidied away, there was just enough time for a quick photo before we all drifted off to our collective homes. Well, apart from the Dirty Stop Outs who hit the tiles until the small hours. I hope you had a good time out girls! 🙂