Winter seems to have arrived. Frozen windscreens, leaves turning brown and a rush to get the kids into their coats before we go. All the apples have gone from the trees in our garden. Many have been boxed or given away. We had a bumper crop this year. Stuff to be thankful for eh? Then today, a bright dose of late sunshine to melt the cobwebs away.

Therapy time again. We seem to have fixed it all to the trans railroad and off we go along it. I’ve been keeping a track of my moods, just a series of dots in Notepad. Any day that’s more than a 5, I think of that as being typical; normal even. It’s been helpful. Being able to look back and see a small pattern and one that’s slowly rising upwards. Sure, I’m not fully out of the woods, but I can see the hedgerows and open fields. At least I’m out of the darkness and there’s no distant bark of wolves. Okay… that’s enough with that metaphor 😉

So what have we discussed? Initially, turmoil within my family – not my as in Mrs J and the nippers – but Jones Senior. Then the birth of Little Miss and how it affected me. To be honest, the birth was fine – no complications for her or Mrs J. Little Miss is by no means a screamer (not like my friend had). Lastly, the trans stuff and perhaps most accurately, my body image. Not that I need to have bits amended – let’s keep it clean 😉 – but certainly appearance plays a part of it.

Sure, many days I sport a day or two’s stubble because I’m in such a rush and I’m just not bothered about a bit of beard hair day to day. Yet, arm-wise and leg-wise, there are days when it does bother me. It is those areas that seem out of kilter, even when I can’t see them as they’re under a top or shirt. I had a chat with the Ever Lovely Mrs Jones about this. I picked a time when neither of us seemed uptight or where tired and hoped we could talk about this without it getting into an argument. We kept it civil and while I won’t be sporting smooth pins, we didn’t have a bust up over it. That was the Monday and the following day I talked it over. The councillor suggested that the depression maybe down to the fact that I’m as ‘out’ as I can be and if I wanted to push things further, it would need to be done with Mrs J and not alone. Given the finite nature of the appointments, I think next week will be the last one. 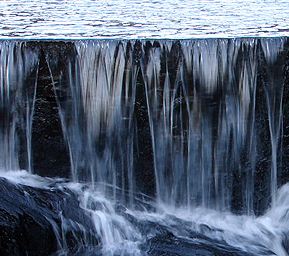 I’ve talked again to Mrs J about all of this and she says she’s not keen on the idea of couples counselling. Even if we went at different times – because, what about the kids? – she said she wasn’t sure what value it would add. She also said, how much to you trust these judgements? A little part of me (Ed: no, not that bit) wonders if the trans stuff has flared up because I’m upset, rather than it being the cause of the upset. There’s a difficult call to make. As I waited for the bus back, I caught sight of water running down the gutter (hence the snap). If there’s a blockage, the downhill flow doesn’t stop – it just backs up, the pressure building up and up until something gives. Maybe that was the problem. Just a build up of lots of small things?

The interviews, if you want to call them that, have been effectively three periods of an hour. Can you really say what’s troubling a person in that time span? I think… I think she has a point, yet so does the councillor. I guess it’s a case of that old adage: three sides to every story: yours, mine and the truth. Where all of this fits in those categories I couldn’t say.

Oh and talking of categories, I was asked *that* question. Not by Mrs J, but by the counsellor.

Do you want to transition?

I said, no as for the most part, I like being a guy. I guess, just a very metro one 😉

She then said, Mrs J’s not here, what do you really mean?

I was a little thrown by that and then I smiled. My answer was this: if there was just me on my own and I thought work would be cool about it – I would probably flip flop between appearances as the mood took me. One day him, one day her or maybe a row of each depending on my mood. I don’t fancy going full time. She accepted that answer and we moved on.

I’m just too lazy and I know I’ll always look like a bloke in a dress. Okay, on a good day, I may be lucky enough to look well groomed / turned out, but with my height, shoulders and jaw – I’d be fooling no-one but myself….. but really, that doesn’t bother me. I accept how I look and I’m cool with that. For me, it’s not about fooling people or being mistaken, it’s just about feeling right and cross dressing helps me feel that way. There are times when I need to feel well dressed as a guy and other times, well dressed as a woman. I never said it would make any sense though 🙂

I think that there’s also a danger in that when you concentrate on what is wrong, you can’t always see what is good. You dwell on what you don’t have. I’m seeing the doctor on Friday (or will have by the time you read this), so we’ll see what happens about the pill dose. I may be feeling slightly more level as my dose went up about two weeks ago.

I also went shopping for the first time in ages. The new Autumn/Winter fashions are out, but really, I’d look at them and think meh. Nothing has really grabbed my attention and I’ve heard the same story from a few (genetic) ladies too. All much of a muchness they say. Too much beige and the same old story with heels and the air hostess/MadMen fitted dresses aren’t really my thing. Sure, I’ve seen the ankle boots and cable cardies people are sporting, but they don’t hold my attention enough to want to buy any.

Disillusioned with the web, I decided on a spot of a bit of real world retail therapy and as I wandered through the store, I did clap eyes on a cute top and two rather nice panelled skirts. One was dark denim and the other more kilt like. I tried them on in and both fit – which was nice. I did try a jumper dress, but I wasn’t sure about the V neck – it gave a rather odd fit across my shoulders.

The Ever Lovely Mrs J and I had another chat about the trans stuff. Again, a level conversation where we talked about it and neither of us go uptight. I know I find it a bit troublesome: embarrassing sometimes, but so it goes. We talked about why Mrs J wasn’t involved and I said it was totally up to her. I mean, why should she be? If I may pry, how many of you are out to your partners and of those, has she seen you and what happened?

After a chat with my GP, I’ve got another batch of pills to keep me on the straight (!) and narrow. He asked about the counselling process and we talked briefly about that. He said that the aim of the chemical treatment was to take your mind off the depression and give you room to think about what may be wrong. Watch this space I guess.

This coming Thursday is a party at Chams. We’ve had a number of birthdays and we like to have a shindig when we can. This time around we’re forsaking the Chinese food and going for a fuddle. I think I’ve mentioned this word before; it’s when everyone brings a few dishes with them. I’ve got a list that needs posting on the forum.

Also, I’ve had a provisional date come back from Boots. It should be good, the last one was excellent and it was enjoyed by Boots and the Chams massive. The only snag is that it’s the same night at the Xmas Party. But, that may not be a bad thing. We may be able to have Boots do something between 8 and 9.30, then do the Xmas food and dance later on. Boots have said that this time they’ll try to bring products (with 10% off – woo!) to buy on the night. I know that was a problem as some people wanted items on the night. Brand wise, we’re talking No 7, Clinique, Estee Lauder (hopefully), Lancombe and possibly some folk from perfumes too. Sounds like a go-er and fingers crossed people will be amenable to it.

Lastly, I’ve just noticed this little blog is now five years old. How time flies eh? I wonder what the next five will bring? There’s a thought 😉

Righto. That’s me done for a rather long entry. I hope the weekend is kind to you.