If you’re a blogger do you find that even if you prep something to write about, you just can’t seem to connect with it later on?

So it was that I had an idea to write about a rather old research paper that I’d found: The Gender Variant Phenomenon. I popped it on the Chameleons Forum and there was a bit of a discussion about it. Not from a naysaying point of view, but more that it connected with a lot of people. I’ve since done a bit more Googling on it and it does data from 2001.

I’m not here to knock the research and I’m wary that just because I’ve found something that hits the old ‘bias confirmation‘ buttons, is it true? I mean, just look at the modern print media at the mo. I mean, is anyone reporting the truth, or is it all through a filter of what sells to a particular political class? Has it always been thus, but now we’re more wise to it? Ah, questions, questions.

So the bit that leapt out at me was Anne’s phrase Gender Expression Deprivation Anxiety Disorder. Now, this next segment are my words, not Anne’s, so if I’m horribly wrong here, please don’t flame me :-). To me, at least, the idea behind GEDAD is that not expressing who you are, is what drives you nuts.

Okay, so I’m trans-something-or-other and ignoring labels, the concept of Lynn/Richard is just a name that match a presentation that I give. I dial up the ‘Richard’ behaviour in some circles (work/home) so people don’t find out I’m somewhere on the gender spectrum, rather than your typical white cisgender male. I guess, what Anne may be suggesting, is that what gets to me isn’t that I’m trans; I’m okay with that. The thorn, if you will, is that I don’t present as I’d like to at certain times.

For some trans folk, I guess that must be all the time. For part-timers – like me – it’s less, but when I find I don’t have the option, that’s when it stings a bit. Are we moving into a discussion about choice? Some may say that being trans is a choice, and I’d say I don’t agree. If your birth sex and brain sex match – please excuse the clumsy phrasing – I guess that makes you cisgender. For me, I don’t quite feel I’m a bloke, and I wouldn’t same I’m a woman either; I’m somewhere in between. So much so, that I can’t bottle it up and when I’ve tried, that leads me to a bad place.

Instead, I think the choice thing comes in as I don’t push hard enough at home/work to be as I wish; which is to be able to be male or female in appearance as I felt that day. I find it a bit funny that I’m saying I don’t really know which gender I’d present as. But, wry looks aside, I think it’s because I’m just me, and the current binary choices of M/F aren’t quite enough some of the time.

Thing is, I’m just not brave enough to push for that. So there, after much waffle is the concept of choice. I’m choosing not to push for the sake of a quiet life. It’s not a bad life by a long stretch, but wouldn’t it be nice if…. 🙂

Luckily the Bank Holiday heatwave had run its course and the idea of dressing a little more fabulously was back on the cards. I had a few tops that had come my way as the Ever Lovely Mrs J and I had been having a serious chuck out at home. It was a case of playing Yes, No, Maybe with each item. Once the Yes stack was packed away, we were on to the Sudden Death round. Cue two bags going to the local charity shop, two tops for me, and some shirts to our transmen at Chams. What’s not to like? 🙂 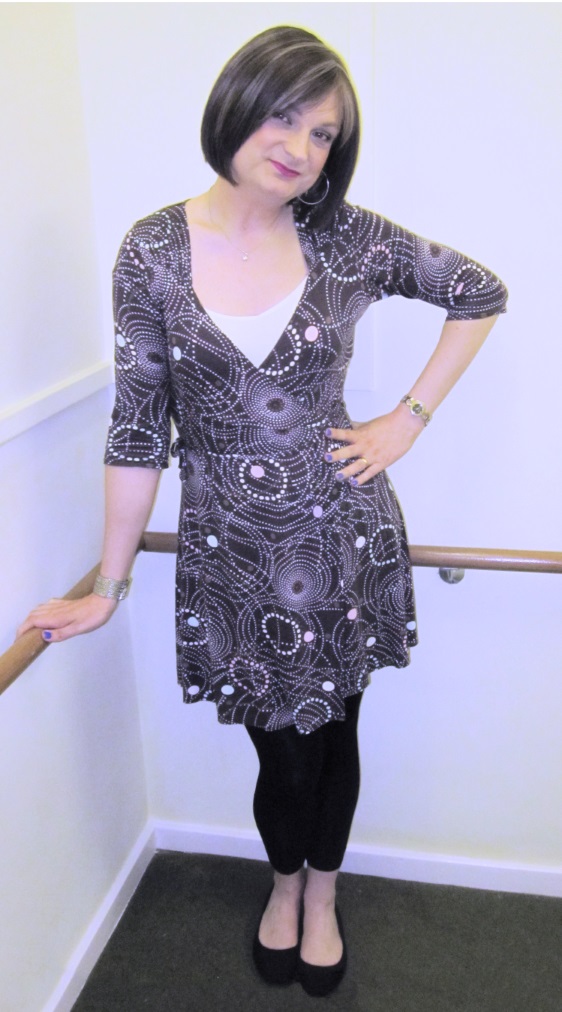 I was a quiet night at Chams but a good one. Sometimes having less of us there means we have chance to talk more as a group. I like both busy or quiet nights, neither is better, they’re just different. It was great to catch up with folk and listen to what they’d been up to. As we meet only twice a month, time goes quickly in the real world, so there’s usually lots to talk about.

As with every night, we end with a quick photo shoot on the stairs. Maybe I’ll get my act together one day and sort out the frame and background. It certainly makes for better lighting, but time is against us, so we often just use the space midway up the stairs!

Still, I was pleased with my outfit and make-up attempt. Unusually I didn’t have an outfit panic when things didn’t quite work. Yay for contentment eh? There was even time for a quick trio shot of Val, Steph, and yours truly.

We don’t often do group shots because – and understandably so – people can be very concerned about their privacy. I get that, and yet not having semi-regular photos of the group, well, we miss people as they come and go from the group. Still, getting a snap with everyone looking and being happy with the end result is quite the art. If you’ve any tips on that, do let me know 😀