I was out at Chams last night and we had a visit from the fab Trendco team: Nicola and Steph. TrendCo, in case you don’t know, are our friendly neighbourhood wig experts. Chams was fairly busy, so there was a fair bit of interest in the wigs brought in.

For me, a good wig is more than something that works for your face, or your outfit. It becomes, at least for me, a part of my identity. My current do is darker than my natural hair colour. While I’ve tried lighter colours, I find myself coming back to chestnut colours time and again. I’ve done long and medium hair, but collar length seems to be working for me. At least, working for me in that I’m comfortable with it and it seems me, if that makes sense. 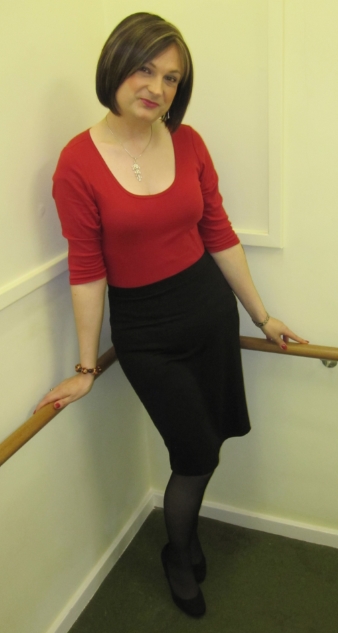 I did try a few on, but – and as I said – it’s as much the cut as it is the colour. While there were some very pretty wigs, they weren’t quite me. That or I’m just very fussy. 😉 I did try one lighter number, and I have a habit of closing my eyes as it goes on. Partly to keep the hair out of them and also so once it’s fully settled, you get to see it as it could be.

Well…. I did have quite a shock. It seems Steph had (obviously) unknowingly picked out the same style and colour that my Mum wears. It was quite the ‘OMG’ moment. It was like seeing a younger version of my Dad, only with Mum’s current hairstyle. So, no, I don’t think I’ll be buying that one. 🙂 As I thought back on it later, it did remind me of those reveal videos, where an actor is made up as a woman, and then when shown their reflection, they react in a similar way.

Still, good fun was had by all, and I did get to wear my new heels from M&S. Yes, I’m middle-class transgender. Mind you, there were both very comfy and with the ribbed sole, easier to walk in that other shoes.

In other news, BBC Radio Nottingham have been featuring some of our members in interviews this week. They’ve been running a series on what it is to be transgender in Nottingham. UK readers – or those handy with a VPN – can listen to the shows via iPlayer (episodes 19th through to 23rd).