I am thankful that it’s the weekend. Not that this week has been stressful or hard. I think, it overdid it a little last weekend concentrating on building the new Nottingham Chameleons web site. Yes, two late nights (nearly 2am. Tsk. When will I learn!) on Friday and Saturday, meant I wasn’t fully recharged for the week ahead. Still, my own fault, but I’m done now.

“If you build it, they will come…”

Chameleons had been using a free forum hosting company for just over a decade and the service had been great. Then one day, pop, it vanished. Not a peep from the hosting company. The whole lot just vanished in an instant. Quickly, we set up a new home and carried on our merry way. Skip on a few months and Moonfruit changed from free hosting (with ads) to paid for.

I took a look at the prices for both and while it would be easier to pay and stay, it would also eat into the group’s funds a little. Okay, we’re not skint, but I find it’s best not to chuck money about if you can help it. 🙂

So, after some questions at work for those who host sites or build systems, I had an idea of what I might need and where to get it from. A few emails here and there and we had our hosting platform sorted. The only thing left – other than building it – was to square the funding via the Ever Lovely Mrs J. It’s not that it was expensive, it was more than my bloke details would be used and in theory, if something went very wrong, or I was sent a physical bill, there might be some explaining to do. Instead, my dear wifey said: “Oh, we’ll just say you’re paying for hosting as you’re an ally.” What a top lady.

It came to pass that I nervously tapped my credit card and personal information into the web application before tapping Accept. I don’t know about you, but I sort of like to test the water before I climb in. For this, while I could get the money back on the hosting, I couldn’t claim back the dedicated domain name (www.nottinghamchameleons.co.uk). Gulp! Well, in for a penny, in for a pound. 😀 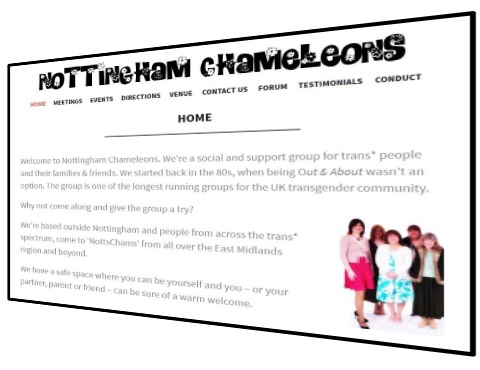 After a couple of nights of testing templates and fiddling CSS (not my strong point), I had something that seemed to work. I asked a few friends over on Facebook to have a look and see if they had any suggestions. Lovely lot that they are [/waves!] I received some polite suggestions and I think they’ve made the site better for it.

Once that was done, it was a case of looking at forum software. I thought about the built-in WordPress system, but it didn’t quite feel right. The other choice was to use one very similar to the free one we moved to. Pros: looks like the current one; people are familiar with it; it’s fairly easy to administer and it had an ‘install now’ button as part of the hosting.

With that no brainer in mind it was next, next, finish and some minor tweaks to get it shipshape. I did add a new icon because I was struggling with the older Chameleons eye, that we’ve had for a few years. Okay, this new one isn’t exactly cliche free, but I think it does the job: we’re mostly MTF with a few FTM folk popping in. That reminds me: talking of snaps. The photo on the front page was done by Debbie and it’s many years old. It does, however, show the variety of ages of people who attend Chams. Something to add to the list.

As to the web site, I can now look back and think: that’ll do, pig. 🙂 Site is done, forum is up and I’ve fired off a few emails to organisations asking them to update their records. The old Moonfruit address will hang around for a few months yet, so with luck people will get the message we’re moving.

Of course the thing is, with more pages and more plug-ins to look at, it’s tempting to think about some help articles for the site. Coping with being trans, where to buy clothes, etc. However, I’m not going to rush into this. I’ll see what folk would like – and that could include you, dear reader – and play it by ear.

Oh, I did read a comment about us being a bit of a ‘knitting circle’, which made me chuckle. Not that I disagree, although we are really, really behind on knitting. Perhaps a lack of wool is to blame and we’re not allow sharp sticks after that Game of Thrones party no-one is allowed to talk about. 😉

Where was I? Oh aye, knitting circle. Yeah, yet on the other hand, I’d heard we we’re “party girls”, whatever that means. Better than calendar girls, possibly. Not sure I’d want folk to see my jelly belly and custard tarts. No, best clothed, shaped and padded I think. 🙂

Jokes aside, I find it interesting to hear what others think of us and none of it offended or upset me. Maybe I’m odd like that. So, party animals or knitting circle? Well, we did mix the two up, but again, but it’s murder knit one, pearl one, big fish, little fish, cardboard box.

The truth, as per, is somewhat in between. Yeah, we have a ‘bit of a do’ once in a while. I helps break up the usual routine of tea & a chat, or tea & vendor / researcher visit. I think parties are generally every four to six months. I think we’ve got the formula sorted, in that we have the music in one room and keep the food and the chairs in the other. That way, folk can drift between rooms as the mood takes them.

As to the chatting, I like to think of Chams as a pub with no beer. Oh, and a better jukebox (i.e.: none 😛 ). We meet up and talk to each other about what’s going on in our lives, our worries and our joys. I think the best thing about Chameleons is that you can truly be yourself. You don’t have to watch what you say: if you want to talk about football, trains, cars or movies, you can. Equally, if you want to ask about coping, eyeliner or a fun day out; you can do that too. We don’t judge. Well, unless you think socks & sandals are okay…. 😉