This week has been somewhat of a strange journey. The Good, the Bad, the Average and Unique, as a favourite band of mine once sang. Let’s start with the good stuff and end of a high, eh?


I was so glad to see the rain today. Down it came, in sheets and torrents, spilling through flooded gutters and pooling in patterned puddles, that danced under the droplets. And yes, down came the temperature and the cloying heat that had hung about Nottingham. Hot weather, nice for lazing around in, bad news for trans folk and folk at work.

Thursday night was a night out to Chameleons and it was bordering on too warm. With the windows open upstairs, it was bearable when getting changed. Luckily, the Ever Lovely Mrs J had let me borrow some chunky heels and use some of her Clinique CC cream (colour correcting, but not as heavy as foundation. I really should invest). Despite borrowing a tunic top from the Ever Lovely Mrs J, I decided to go with my summer trousers and a black top. Reverse monochrome seems to work, so why mess with a classic? 🙂

I was happy with my make-up and after a chat with Diane (who’s newly straightened hair looked fab, BTW), decided to go with a matte red lipstick, as a change. Given I’d kept my eyes fairly neutral with light golds for summer, I thought why not. Top off with some pretty earrings and blue gel look nail varnish and I was feeling refreshed… if a little warm 😉

Earlier in the week, I’d parked up in a layby far out in the sticks, opened the windows to hear the birdsong and painted my toes ready for Thursday. I answered a few work emails on my phone, before sneaking back into the post-rush hour traffic and making it to work only five minutes later that I would do usually. Sometimes, it’s the little things, isn’t it.

Downstairs, the newly installed air-conditioning was doing its best and was making the Union Jack flags flutter. I think they were up for the celebration of the Queen’s birthday. Sandi said it had been a while since we’d had a party, so that’s something to plan for over the new few months.

Chams was a little quieter than usual, probably due to the light night and the weather, but we did okay. I chatted with Val and Nicole about the EU situation, and said hi to a two new visitors. Both of the new folk enjoyed themselves and hopefully, we’ll see them again soon. 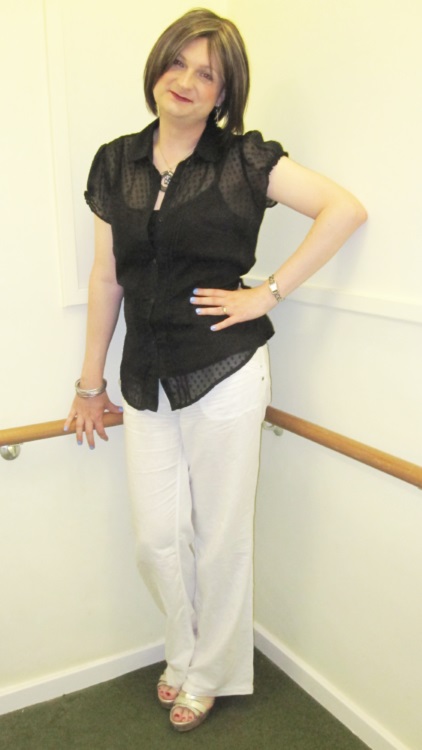 Come the end of the evening, it was time for some quick photos for Val and I, and then to clean up, lock up and head home.

I’ve said it before and I’ll say it again, I’m an autumn bird. The colours on the trees, the promise of Christmas and Winter, the fall fashions and, for me, the respite from the summer heat. Much as I like a bit of Spring sunshine, I don’t do hot weather… and certainly not in a stuffy office.

With the continual rising temperature I was starting to worry, that it would be too hot to face the music at Chameleons. One of the not-so-lovely things in the trans experience, in addition to The Drop, is The Panic.

The Panic starts, at least for me, with a spark of worry. You won’t be able to make it out, it whispers. Another month until the next time. It’ll be summer and it’ll be too hot. You’ll be him… for weeks. The spark, if fed, grows into a slow burn like charcoal. Steady and the consuming slow burn.

At least, that’s what it would do, if I fanned the flames. To engage my CBT mind-jitsu, I have a choice when it comes to emotions. I can acknowledge and embrace them, which I do do, if they’re worthwhile. The joy of a moment, the good vibes of helping a friend or a hug from the Ever Lovely Mrs J, or the nippers.

I can, also, acknowledge that The Panic is starting. I can feel it, even now, as I sit, but I’m not its slave. I don’t have to listen to it. I can nod, give it an imaginary wry smile and tell myself, it might not be that bad. There will always be another time. Mostly, this works, but The Panic’s a persistent wildfire that knows to bide its time.

A brief mention of work, as I’d been invited to a thank you event for some community work, I’d been involved in. Cue some free drinks, a chat and a slice of cake. Really, what’s not to like?

Like many couples, the Ever Lovely Mrs J and I, chat before bed. It’s that quiet time, when we can talk about things that have interested us, or worries or good things. There’s just us, and so conversation can be more mature topics, without the risk of the kids hearing.

By random happen-stance, Mrs J said she’d been reading about a guy who was gender fluid. She mentioned his name (Peter) and I wondered if it was Peter/Pippa who’s flying the gender fluid flag, down in London. It wasn’t, but that’s by the by.

She explained that the Peter was out to everyone and his wife had said, once he was out, it made their lives a lot easier. He would dress at home, because they were both cool with that, although when Peter wasn’t out, she would worry about possible visitors, who didn’t know.

For them, Peter being out worked. He could attend work as ‘her’ or ‘him’ and this wasn’t a problem. The No Secrets approach was working in their relationship and we chatted about what this might mean for employers.

Conversation moved on and as I drifted off, I wondered, would that be my ideal? To not have to be ‘him’ 99% of the time. Instead, to wake-up and not have to mask my appearance, or as some might say, authentic self. I played with the idea and it has attraction. Thing is, it’s only attractive if my family would be okay with it. That’s not to use them as a blocker or an excuse, but I’m not feeling the push to flip between Richard/Lynn mode so strongly, that I’d step on their feelings.

Still, it’s a lovely thought. With apologies to The Bard:

To be, or not to be, gender fluid?
That is the question.
Be it braver to suffer the jacket of singular gender,
Or the arrows of being thy own true self…. 🙂

Maybe one day, it won’t be a brave step, just something people can do. I can dream.