Last week I was checking through my RSS feed of blogs and checked to see what the good folk over at T-Central had been up to. If you’ve not been over, the site is worth checking out. They not only keep a long list of trans blogs, but they also do a feature post. Usually, posting a link to a trans blog article that’s a thought provoking read. They also link to those who’ve just been babbling away to themselves (here and here). 😉

Anyhoo, on Saturday, I spotted a link to a post called the Slippery Slope, which was written by Nadine. It’s not the first time I’ve heard those words. Not from the My Husband Betty books, but from my own dear, Ever Lovely Mrs J. In fairness, it was a long time ago and during my…. not sure what to call this. I’ll go with experimentation phase. That time when you’re sort of out, at least to your partner, and you’re finding your feet. Oh, a slow hand clap for anyone who says, try looking down your legs. 🙂 I’d run out of nail varnish remover and came home with red nails. A quick clean up and I was fine, although I did make the bathroom bin whiff of chemicals. Naturally, Mrs J was curious and then felt that it was all escalating. Which, given that I didn’t wear nail varnish when going out before, can’t be denied. That’s not to say her (righteous) missive didn’t sting. Sometimes, the truth hurts.

So, how do those two wee facts interlink? Well, I’m glad you asked. There is, I believe, the phenomenon of the trans shooting star. See how it reaches into the sky leaving a blaze of fabulous sparkles and carefree behaviour. Nothing can touch it…. except the gradual and unrepentant gravity of reality, or the heavy handed slap of guilt. We’ve all been there, or know someone who has. There’s no shame in it. We – trans folk – get a whiff of freedom and we’re gone…. hence the graph (below). 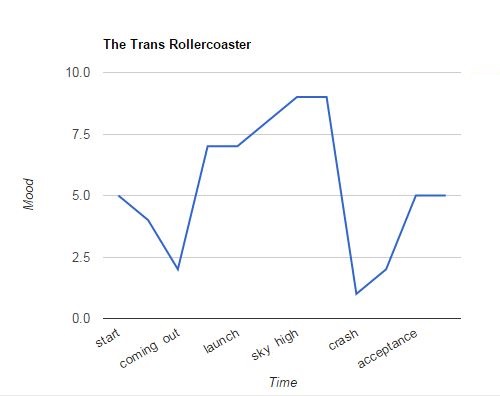 Joe’s our stereotypical transgender person, we’ll go with male by birth, because I don’t what it may be like for our trans-men cousins. Joe starts off in life and slowly, the trans pressure builds up. He either can’t take it any more, or he’s careless; it doesn’t matter, He’s coming out and down the mood drain he goes. Joe may question who he is, and maybe his partner is questioning Joe on who he is too. Maybe positively, or maybe not: every journey is different.

Slowly Joe starts to get his head around things. He begins to be more open, maybe drop his guard. Those who’ve been through this, maybe begin to hear the gentle calls from Mission Control: We are go for launch. Joe’s launch into the trans world is underway. Off he soars to the nearest shopping area, or Internet site. Plain paper packages arrive in the post. Credit cards start to get a little warm and he’s pushing at boundaries neither partner knew they had. Off he goes, sky high looking fabulous and without a care in the world. All is fine in the high T-Orbit. Nothing can touch him…..

Except, the real world. Joe cannot live in a bubble. He has to come down for air and that high orbit high over the world, sure, there are other passing stars, but he’s left some people behind. He begins to lose height and that re-entry burns him. He’s gone so high, so far and yet…. he’s still him. He’s still Joe with this new world and his old one to balance.

Will Joe hit the icy waters on his own, or will his crash be lessened by his friends & family? Who can say. That’s up to Joe. Maybe he’ll share with his partner and find he doesn’t need to be fully off planet, to have escape. Maybe he’s happy with a few times a year, once a month, or just a weekend. It’s not our call, it’s Joe’s.

Over time, Joe will learn some home truths. Maybe he won’t like some of them, maybe he’ll give up for a bit and lay low. That interstellar flight wiped him out. Slowly, but surely, he’ll feel T-Call and he’ll start again. Not at the blistering white-knuckle speed of last time, but a gentle pace. He’s tasted freedom and he’s felt pain. Maybe Joe’s learned enough to balance both. Maybe he’s learned acceptance and maybe he’s lucky enough to have a partner who loves him – all aspects of him. Let’s hope he has. No more boom and bust, or worse: doom and dust.

Let’s hope that Joe can look back. Realise that what’s happened has happened and where possible, learn a little. Learn to be okay with who he is and who he sometimes likes to be.