Subject to Blogger’s scheduling system, you should be reading this, while I and the Jones Massive are lording it up on summer holiday. Those of you of a certain age, may wish to hum Cliff’s eponymous critique of the yearly trip. While, those of another age, may supplement The Young Ones as a backing group. (“Did you just call me a b*stard?!”). Lastly, those of you under 40, or not from the UK, may consider what on earth I’m prattling on about and skip to the next paragraph. 🙂

The next paragraph is a bit further down….

T’other day, a news stories popped into my social media feed. Entitled I was Transgender and Didn’t Know it… I’d suggest you have a read, if only to distract you from my gibbering.

Done yet? I’ll assume you have, not that it matters if you’ve skipped it. 🙂 I’ll state that I’m trans-something-or-other, in that I’m conscious that different people read different things into labels. Whatever badge you care to pin on me – perhaps like some politically sensitive Pin the Tail on the Minority  – there will be someone who doesn’t agree with the definition, or even the labelling. But, moving on, one thing I can agree on: I’m not 100% bloke in my head. There’s some influence in there, that makes me disinterested in ‘being a lad’, sport, cars and sexual conquests. Truth by told, it might be more that I’m a geek, and the trans stuff is just rather fabulous icing on an already tilted cup-cake….

Gah, I’ve lost my train of thought. [ drinks tea ] Ah. It was behind the saucer, under the chocolate biccie. Yeah, so I wouldn’t say I’m trans as in need-to-transition-trans, but somewhere on the spectrum. After reading the above Didn’t Know It article, I looked back at some of the stories the Chameleons folk have shared with me, and a little bit of my own.

I think the earliest I knew something was different, was the second or third year of primary school. I also knew that a small boy with a curious interest in pretty things, was something you kept quite about. The 70s was (sadly) rife with homophobia and even at a young age, you’d hear grown ups talk about “he’s one of them’ or “bats for the other side.”. I didn’t know what One of Them was, but from their tone, it didn’t seem a good thing. 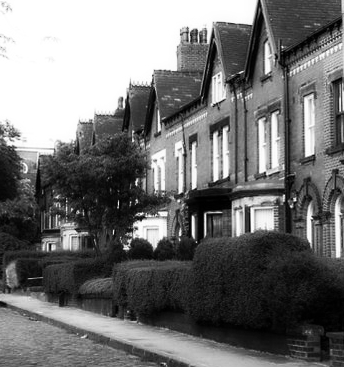 About this time, and in a city, somewhere far, far away. There was a house somewhere in inner city Nottingham. Gentlemen who were ‘in the know’ would occasionally frequent this venue. Men would arrive and would then, to use a well know phrase, slip into something for comfortable. Hours would be spent, socialising and mixing with other trans people. They’d be away from society, because the Good Old Days weren’t good to everyone.

I only know of the above, from a chat from a self-described irregular regular at Chameleons. I very much doubt Miss R visited (too young) and we only have whispers and, possibly, legend to go on.

I wonder who lives in the property now. Are they aware of the history? Where they even part of it? Maybe we need a new additions to Blue Plaques that include this pre-Out history. So much was hidden, and to an extent, still is. We’ve still a long way to go. We’re getting there.