Not much of a post this week. It’s been a bit meh in places, if I’m honest. 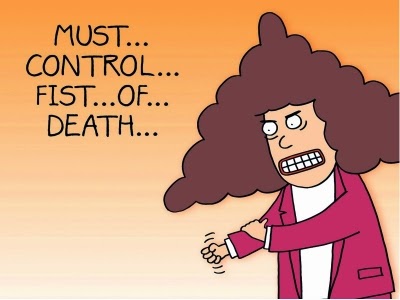 Work is really annoying me – or more accurately, we’re being turned into a support function, when we’re developers – which is really the crux of the problem. IT nerds may like to say root cause at this point. But, I’ve never been one to sit back and let things lie 🙂 I’ve been to see the head honcho in charge (no PHB, if you follow Dilbert) and I’m continuing with the dev work regardless. Mainly because we’ve got enough support staff; if the dev work doesn’t get done, our team will be in front of the fan as the muck spreader switches on; oh, and I find it much more rewarding being able to put systems in that actually help people do their jobs. Clearly I’m not cut out for the modern workplace, which seems to run on bullshit and paperwork.

But enough about that. 😉

Due to a surprise school concert there wasn’t enough time to get fancy at Chams. The Ever Lovely Mrs J said I didn’t have to go, but I felt that I should…. and I was glad I did. Wee Man’s drumming was brilliant. He’d been working on a track with the guitar teacher (rock guitarist at that m/ ) and it was very heavy. We were surprised and impressed! People started to clap along and Wee Man didn’t drop the beat once. After all that, we came home and after a quick bedtime story, I heard off to catch up with friends at Chameleons. It was a quiet evening, as the summer months often are. That and it was Sparkle’s‘ tenth anniversary too.
Now, Sparkle – at least for me – is a bit of an odd thing. No, not the event itself, but my feelings around it. I think I need to add a disclaimer that I’ve never been. Sure, in the past, I’ve really wanted to, but as my homebody trans life has ebbed and flowed, I find myself less interested.
I know a few friends who gone and they’ve enjoyed meeting up with friends, but it does – by their words – seem a bit of a circus. I guess I, and to an extent my friends too, are lucky in that it’s not the only time we can go out. I mean, I get to go to Chameleons twice a month – generally speaking – and maybe others out & out incidents too. That might not seem like much to some, but to me, it’s enough to keep me (mostly) sane (wibble!).
Mind you, maybe it’s the heat that puts me off. What? A wig, make-up and foundation ware on a summer’s day? Gah, I’m passing out already. 🙂
Take care,
Lynn