Once more into the Blogger interface, dear friends, once more….. and then…. your brain goes… meh. At least, that’s what seems to happen to me. Some days I’ve got loads to say and other times…? Well, it takes a little while for the old noggin to wake up. Ooo. Listen, what’s that? Sounds like the 8.48pm train from Ideasville calling in.

It’s been an odd week for interviews. On the one hand, I’ve had the good fortune to have a telephone interview with an agency. They rang me up after seeing my LinkedIn profile. Honestly, does anyone have a LinkedIn profile for any other reason than to pimp their CV and hope to get head hunted? 🙂 I’m not sure about the job itself, but it work continues to slip into Advanced-Colouring-in-Within-the-Lines, rather than Using-Dark-Arts-to-Make-IT-Stuff-Do-Clever-Things-and-Making-People’s-Lives-Easier, I guess we’ll see.

After than, I had a call from a researcher on behalf of a group called PACE – no, I’d never heard of them – and they’re running a research project called RaRE. Or, to break the letters up, Risk and Resilience Explored.  The website and the email stated:

“PACE has been funded by the Big Lottery to undertake a major research study on inequalities in mental health in lesbian, gay, bisexual and transgender (LGBT) people in England.“

Let’s have a think… Trans? Well, trans something or other, check. Former mentalist? Check. 🙂 So, I completed the email, filled out the survey and thought nothing more of it. Skip on a few days, and I receive a telephone call asking me if I’d be interested in a chat with one of the researchers. Fair enough, says I and so it was, that late Tuesday, I was sat in my car, answering some questions about the ups and downs I’ve had.

Really, and I’ll be frank (it’s not Thursday, I’m Lynn on a Thursday), I think I’ve got off very lightly compared to many people. I wouldn’t say I’ve had anything Really Bad, y’know, the stuff that needs a bold font and underlining to drive the point home. Two bouts of depression and being outed, that’s it. That’s not to say the depression was a skip through a tulip packed park and the promise of a summer picnic, it wasn’t. But I’m still here despite the efforts of the Black Dog. The outing? Well, if that hadn’t have happened, I wouldn’t be living here, with the lady and children I love now. So, all in all, it’s worked out rather well.

The questions were around what episodes of mental distress had I had (see above), what effect did they have on me (namely the outing – it made me cynical and angry for a few months), why did I think trans people have a higher rate of mental problems, did I think trans people drank more than non-trans people, how did being trans affect my body image and a few others I’m afraid I can’t remember right now. After each question, I was asked what could be done to help people in a similar situation.

In my late teens, I drank rather heavily to take me away from my worries. I suppose it’s a phase some people go through and some stop, and some don’t. I know a female friend turned to drink when her problems became very hard for her. She did pull herself out of it, but that’s another story. I drank to excess when I was younger, but now, I know it won’t help me and I’m not interested. I don’t need a couple of pints to make a fool of myself and all the calories in drink aren’t good for your waistline either 😉

On a less flippant note, I think that there can be a higher level of stress for trans people. Certainly those who are not out to family or friend. I know I have to watch what I say and that’s one of the really good things about catching up with friends at Chameleons. I don’t have to go in Lynn mode – and as you know – there are times when I haven’t. It’s more the case that I don’t have to watch what I say. I can be myself. I don’t have to wear a mask. From a family (not with the Ever Lovely Mrs J, though, bless her) and social point of view, I have to be careful and at times, that can be taxing and frustrating that I can’t – or won’t – be honest.

Looking at what could be done to improve matters, I think education is paramount to the process. The world is a different place than it was when I grew up, but in some ways it’s still the same. You may be able to walk down the street (mostly), without trouble, but the same cannot be said for on-line (Twitter Trolls?). I think we need to help educate trans people that it’s okay to be themselves. That and we need to educate non-trans people that it’s not okay to mock us for what we are and that we are people. Maybe if we can learn to like who we are, we wouldn’t get into these states of distress and we come back to the old argument of prevention versus cure. 🙂

Pat had been kind enough to organise a visit from a shoe vendor. Given the possibility of a spot of shopping, I decided to go for professional look. Sadly, my plumber’s outfit was in the wash, but by lucky happen stance, I managed different attire instead. 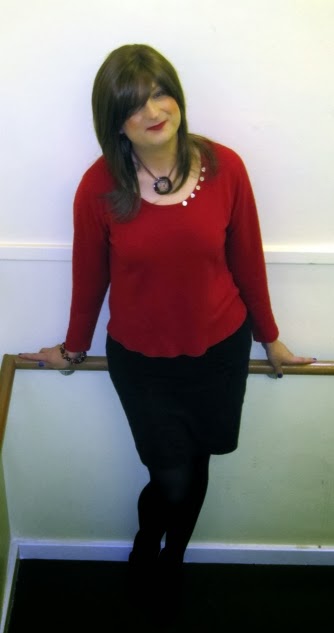 I tried something new with my eyebrows too. I had been using an eyebrow pencil, but it wasn’t quite working as I’d hoped. I find that my brows tend to get lost a little under my foundation – not that I trowel it on (I hope!), so a little definition isn’t a bad idea. I found a suggestion on Pinterest to try using an eye-shadow that’s close to your brow colour. The trick was not to go too dark – which I almost did. Duh…. 🙂 It did make my brows stand out, but with a touch of powder and then the wig on, they looked more shapely than usual. Alison asked if I’d had them shaped, so I guess it must have soften them a little, even if I felt they looked bolder. Something to practice a little, perhaps.

The vendors had brought along a selection of heels, mostly daytime/officey ones, from size nine through to thirteen. If they’d have had any fourteens, I would have been tempted to mount a rescue mission to anyone trapped in waterlogged Somerset. Luckily for my purse, the nines were too big! Bugger :- How does that work? If I try an eight in New Look, I’m okay 50% of the time, while an eight in Dorothy Perkins is hoping on my part. Some standards would be nice! 🙂

Still, it’s not like I don’t have enough shoes at the mo, so maybe it’s best I save my pocket money a bit longer. Despite the chill in the air, we’re heading to spring, so fashion – like the seasons – is on the turn and I much as I love opaques or leggings and boots, I think I’m ready for a change into something brighter.