I used to think that time was a constant. You know, the dependable oscillation of an electrically charged quartz wafer, the slow turn of the planet, or the slow arc of the sun across the sky. But no. 🙂 Instead, time seems to run at different speeds. Take for example waking up. The alarm goes and through Herculean effort, I manage to raise not only my eyelid, but focus my eye and swipe ineffectively at the smart phone.  🙂 Apparently, five minutes pass, whereas in my head, it’s ten seconds before the snooze function kicks in.

I wonder if this lost time is used to pad the morning when you get into the office and you realise you are short of something to do. Well, not without a list of things that need to be done, but rather, things you’d like to do instead. You know, the fun distractions or pet projects that you’re actually interested in, rather than answering email, writing a report or pretending to be interested during a meeting.

The Return to Work

So, this full week at work started verrrryyyy sloooowly – see what I did there? 🙂 – and everyone seemed to be missing the Christmas Holiday spirit. Perhaps they drank it? Whatever the cause, folk were not enamoured with being back, but oddly, despite a morning of not feeling all that chipper, I found myself brightening up. It seems that if other folk are looking on a downer, I seem to bounce the other way and try to say it’s not that bad. That’s not to say I’m not capable of being a right miserable mare or a cynic, but it makes a change.

Talking of ‘I’, I read the other day about ideas towards being happier. Not being too introspective, not talking about yourself…. Well, sh**, there goes this blog then. 🙂 Weak gags aside, I did notice a comment about asking others and this was backed up in a Leaders Vs Managers technogibberish psychobabble thingy I read. So, for a wheeze, I thought I’d try and ask more questions during conversations and listen to what people had to say. Dare I say, it was all very interesting and made a change.

Oh, there’s mutterings on the work grapevine about more Trans training and another Q&A. Seems HR can’t get enough of this particular topic. Now, is this the time to load some questions about part timers? 😉

The trip out to Chameleons was a little odd. Well, not the trip itself, that was fine. It was more the getting changed part. Do you ever have the situation when you know exactly what you’ve got to do, but for some reason, you just can’t seem to get it right?

I mean, thanks to a bit of planning and some careful use of the tweezers by the Ever Lovely Mrs Jones, my chest was not looking like a war zone….which, umm, it did pre-Christmas trip out. Note to self: shave carefully and do not press too hard.

Anyhoo, despite having just the one outfit – okay, I did take a spare dress just in case – I struggled to get the make-up right. I don’t know what it was. Not exactly a disturbance in the T Force (not what you Yorkshire folk think: T’Force is strong in this ‘un 😀 ), but equally, I wasn’t getting it right. I wasn’t rushing, it just seemed that things weren’t working properly: eyeliner seemed off; eye shadows too sparkly – so switch palette; eyebrow pencil looked more Magic Marker than gentle enhancement; but I cobbled something together and headed downstairs.

Oddly, come the end of the evening as I was getting changed (or de-princessed to use some slang I never do), I caught my reflection as I opened the make-up wipes and I felt pleased with the end result. What was that then? Nerves? Impatience? Answers on a postcard to the usual address. I mean, it’s not just me is it? Surely not…. Perhaps the rather nice nail varnish that Sophie had given me for Xmas had helped. Liking this a lot!

Numbers were okay, although I think the group are going to have to raise the admission fee. At the mo, we charge a five pounds to get in, although it’s free for first time visitors and partners. Numbers have dropped as people have spread their wings and as the rent has increased, we’re finding we’re not making the necessary number of attendees to cover the weekly rental. Yes, we could switch to a smaller room, but that would mean the larger room could be booked by others – so less privacy – and we’d lose the free use of upstairs for getting changed. Tricky. 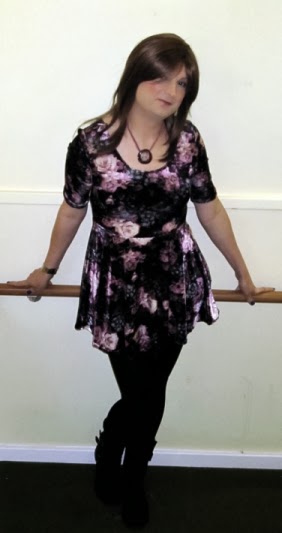 Another option would be to become a monthly meeting, but I think that would prove unpopular. The Ever Lovely Mrs J is very good with numbers, so she had some excellent ideas about bridging the funding gap. I know Sandy is going to tot up the numbers and see how many folk we get over a year. I guess we could divide our yearly rent by attendees and that becomes the new admission fee. We could also start charging half price for partners, but I’m not sure how popular that will be. We don’t charge for drinks and I’m reluctant to suggest we do. That would be a pain to tot up.

The Ever Lovely Mrs J also suggested that we try and tap visiting vendors for either a sub – if they approach us wanting to sell – or, if we invite them, ask if they’d donate something to a raffle prize. It’s worth a go. It’s not like the group is running out of money, but if we don’t keep an eye on things…. well, I’d hate to see the group fold. I know it’s been a lifeline for me and I’m pretty sure Chameleons has really helped other trans people too.

So… if you’re in the area and you think about popping along, please do. It would be good to see some familiar faces and even if you think it’s not your bag anymore, don’t forget your roots, you might be glad to see the group in years to come. ♥