So we’re a few days into the new year. Even if you didn’t have a calendar to hand, the tip off would be the sales of get fit DVDs, the return of the nautical look and Easter Eggs (and not the ones the NSA sideloaded into your smartphone either 😀 ). Due to the way Xmas fell this year, I’ve had the good fortune of a number of days off, and this week, I’ve only been in two days. A nice easy welcome back to the working week….. or ‘turning up’ as I like to call it 😉

Last year I signed up for a Blogger Challenge and this involves receiving a topic suggestion and, well, you guessed it, blogging about it. This time, the statement was along the lines of, rather than write about a New Year’s Resolution, share a quote of a picture that inspires you.

Well, where to start? 🙂 You know me and quotes. I do like a quote, not so much the soundbites that pepper the media, but moreover the ones that make you smile, laugh, sigh and/or think. Whenever someone mentions the idea, my cynical brain spits this up at me:

Which you can read as a wry look on the whole concept. But then a little more digging reveals the rest of what he had to say:

“It is a good thing for an uneducated man to read books of quotations. Bartlett’s Familiar Quotations is an admirable work, and I studied it intently. The quotations when engraved upon the memory give you good thoughts. They also make you anxious to read the authors and look for more.“

Which, to me at least, seems less barbed and more inspirational, but again, that’s not something I’m going to write about. 😉
The observant amongst you will have noticed that I’ve pretty much dropped using a lyric as my post titles. I liked doing that, but it got to a point last year, that I was spending more time thinking about a line from a song, than I was on what I wanted to write. Cart then horse? Nah, not right, so I gave it a break and now, a few months down the line, I find it a lot easier. Go figure.

So, a line or picture that inspires you and maybe others? Speaking personally, I’ve seen pictures of T-nights out when everyone is smiling, or laughing, and everything is going well. I can look back at those snaps and think yeah, it does get better. But that stuff is more personal and probably pretty standard for Joe Public. I thought about the rainbow flag that gets waved (pardon the pun) around. How that’s more inclusive and how we – well, those of us on the side of mainstream society – are becoming more vocal, more accepted and enjoying a better quality of life. Sure, there is a way to go for equality, but I think we are further on that we were ten, or even five years ago.

But, I decided not to put that. Instead, I went for something a little more closer to home. I think it was the year before last when I was doing some work with some students and on the way to get a tea, I spotted a poster stuck to the wall: 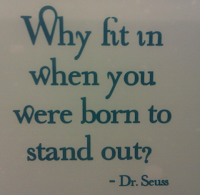 Why fit in when you were born to stand out? I’ve sort of bumped into the Dr Seuss works via my kids, but that’s about it. I guess there are a number of ways you could look at that quote. I think a cynic – or an egotist – could argue that it means if you’re great, you should stand out and be better, but I don’t buy that. Much as I’m a show-off and actually enjoy giving presentations (especially if there’s a chance to sneak a joke in), I don’t feel that there’s anything stand out about me per se. I think I stand out because of what I am, rather than who I am and being trans-something-or-other, I can pick when that is. Sure, I get to lope along in deep stealth Bob Mode, but if you know how to read the (T) signs, I guess it’s obvious.

Sometimes, it’s not about the outside looks, it’s how the inside works – if that makes any sense. I can be with friends, or at work, two days worth of stubble, jeans and a t-shirt, yet I can feel a bit of a fake when it comes to being a bloke. Please don’t ask me about sport, cars or DIY; those are alien concepts to me…. but I can tell you what your wife/girlfriend might really like to set an outfit off. 😉

No, I look at the quote from the angle of being true to yourself. Many of us are different, not in a bad or dodgy way, nor in that occasionally cheesy everyone’s unique….. well, umm, in a way, we are. Sure, there are elements of our personalities that are very similar to others, and yeah, we sometimes do go along with the herd. But, not always. 🙂

Then, if I think on it a little more, I wonder if it means that no matter what you do, you cannot fit in with everyone. Sometimes, you are going to have to go it alone and stand out. It won’t be easy, but I think there can come a time when it’s easier to be yourself, rather than spend your time being what other people expect you to be. When Life gets a little tough, I think back on Dr Seuss’s quote and try not to worry. Well, too much anyway. 😉