If I had to pick a month that was my favourite, I think I’d have to say it was September. For me, it’s the slow turn to Autumn, but without the sharp cold, nor rain of the later months. The evening sky is beautiful and the heat of the summer has faded. There’s less to do in the garden, more the time to enjoy long, leisurely walks and, if you know where to look, to enjoy a spot of blackberrying, picking apples or collecting sloes (hello, Mr Gin!). 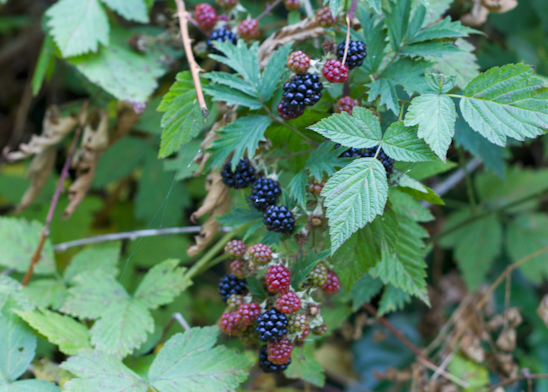 I find picking blackberries a very relaxing pastime. Sure, there’s that slight frisson of worry that you’ll snag your trousers / top / hand, but I find that stops me drifting off. Instead, it’s that gentle pull of the berry from the thorny briar and knowing that when you get home, you can divvy them up – who doesn’t like blackberries? – or make something nice with them. Blackberry & apply crumble, blackberry rum, muffins, or just good with a little ice cream.

There’s also a fashion element to September, you’re not into your Winter Woollies, and it’s time to start putting away shorts and t-shirts, getting out old favourites, or hoping you’ll see some new ones as the new collections come out. Of course, there’s the hope that you’ll find the perfect set of boots, even though there’s nothing wrong with last years. 🙂

The old devil, the Black Dog, has been away for some time and you know what, I don’t miss him at all. I feel a lot more balanced and relaxed than I did six, and certainly twelve months ago. With luck and the right frame of mind, I hope things will continue this way.

Why am I raising this? Well, other than enjoying life, I did something either a little brave, or a little foolish: depending on your view. 🙂 At the start of the week, I was invited to give a talk to a large number of people at work, some of whom I work with regularly, some, not so much. Some of them…. I had… Now, I almost put Let The Dog Snarl, but I think that would suggest that it was talking for me. Perhaps a better way would be to say, I let my inner anger spill out and I was rude and insensitive to some.

I started the talk with two items: one that I was very grateful for the collective work they’d done in getting the big project done in a very short space of time. I’m not a manager, I’m just a technical bloke, but I know hard work when I see it. I was also rather cheeky, in that I took the opportunity to say something like this:

…around a year or so ago, I was suffering with depression and to those of you I had been rude to, I would like to apologise to you for that behaviour. I am grateful for your patience and that person that I was – probably a bit of an ogre, if I’m honest (laughter)- is long gone. If you need help with this [project], please do get in touch. I’m here to answer your questions and move this further forward.

I took a quick look around the room, caught a few eyes and then I moved on to the technical topics people wanted to cover. At the end of the talk, as I packed my things up, one chap came over to me and said how brave I was. I thanked him, but really, my aims were to apologise and try and dispel the ogre reputation that I’d built up. Coming back to the office, I had a few emails saying similar things, including one from a chap who was still fighting the fight himself. I wished him luck and that if he wanted a talk, I’d be happy to listen.

There’s also a little bit of me that wanted to put out the message that a) you can beat depression and b) that anyone can get it. I’ve had it said, What you? depressed? But you’re outgoing / confident / etc, but then, like any other illness – and that’s how I look at it – sometimes it’s just your turn and you have to plod on.

In other news, today I caught a radio programme about a feminist magazine that started in the 70s. I was only a young kid then, so I guess a lot of this passed me by. I heard such gems about women being sacked for being pregnant, women not being able to have a mortgage without a partner, etc. I was…. unpleasantly surprised by some of these reports and, if you dig further, there are probably some others.  Stunned may be overstating it, but I’m glad I live in the time that I do. If it was like that for women, what was it like for gay or trans people? I hope we never turn back that particular clock and that other less liberal countries, soon their societies will move on and being more accepting.