Ah, back to work after a long weekend and very pleasant holiday. Still, the week has been both short and good to me.  The good stuff is that we’re all well and whatever genetic clock exists within us to kick spring cleaning off, has well and truly chimed at Chez Jones. Okay, the house isn’t exactly tidy, but it’s tidier than it is usually! The thing is, it’s not like I can blame the kids because Little Miss’s bedroom is a model of minimalism – honestly, she doesn’t get that from me or the Ever Lovely Mrs Jones. I think that’s Grandma’s genetics at work! 🙂 No, I’m a messy so-and-so, but I have a clutter limit and the aforementioned internal spring cleaning drive. So, we’ve been moving bookshelves around – yes, we have a lot of books (Ed: at least more than a dozen and some without large print or pictures 😛) – and with home improvements on the horizon, we need to empty the back room and the garage. With luck, the builder will be getting back to me shortish. Despite the disruption, I’m looking forward to seeing the work being done.

On a less than positive note, I’ve not got anywhere with two of the jobs I had my eye on. Well, in all honesty, the first one was an internal position (Ed: fnarr fnarr!) and as I posted on BookFace the other week, my application was, if I say so myself, a truly excellent piece of fiction, 😉 Glib comments asdie, it wasn’t all made up, a lot of it was accurate and obviously I’d angled the application to big up (yoof speak?) certain areas. Still, no dice on that one, but better to have tried and failed, etc. If nothing else, it puts your head above the parapet.

Oddly, not getting an interview – perhaps because I wasn’t expecting one? – didn’t disappoint me. What did, however, was that I rang up an agency I’d registered with, to talk about a consultancy job I’d had my eye on. No dice on that one either. Pants 🙁 Again I’ve got good experience, just not exactly the right type of experience they wanted. Ho hum! I think I need to work on my BS to try and hone my chances. Still, on the bright side, said job was highly likely to have required a fair bit of travel, so that would mean less family friendly hours and really, that’s more important to me right now. Maybe somethings just aren’t meant to be eh? As the Ever Lovely Mrs Jones says, you only need to be lucky once. It’s not like I’m unhappy where am I right now – again, something to be thankful for – so, being able to take my time isn’t necessarily a bad thing. Hell, I’ve jumped ship once (a long time ago) and as I rushed it, I ended up in a job I really didn’t like. Still, that was ages ago and I’m hopeful it taught me a lesson to keep my eyes and ears open and my ego off-line.

Rolling back the clock to Thursday night, it was time to pack the proverbial glad rags and head off to Chameleons. Little Miss was staying with Granny, so I was a little late in setting off compared to usual, but again, nothing to worry about. The Zumba massive had cleared off by the time I arrived and Pat & Alison were waiting to be let in upstairs. I’d packed the night before and unusually for me, I had an idea of what I was going to wear. Maddie turned up later on and we had a good long chat about this as that as we all got changed. 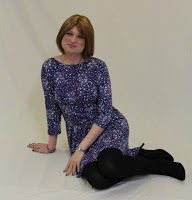 Arriving downstairs, Tracey and Sandi had brought in the new photo backdrop rig they’d bought (bless ’em). Tracey had brought along her fancy camera, so lots of people got stuck in having photos taken. Well, it was a trans do after all 😉 Yes, of course, I had some snaps done – mais oui!

Miss H of  Virgin Vie fame popped in too. This time to deliver the items everyone had ordered at the last meeting and also to talk about booking a jewelry event. Seems there’s a sale on, so perhaps we’ll fall on a bargain. That reminds me, I must get that put on the group’s web site.

I felt a bit guilty about sloping off to the pub earlier than usual, but I had promised that I’d catch up with Alex about the ‘a different journey’ web site she, Maddy and I had been talking about. I headed off to the pub with Sophie and Emma X (see as Emma lives not too far away and it’ll save her a bus ride home). Sam, Rachel, Maddy and Kate were already ‘in da house’ and as it was karaoke night, I couldn’t resist a rendition of The Irish Rover. After a bit more chat – really, do we do anything other than talk? LOL – Maddy and I had a go at performing (Ed: the use of the word singing doesn’t apply to them!) Take a Look Around by Limp Bizkit. A good laugh if nothing else.  At that point, most of the trans massive headed off for a curry and as it was late, Sophie and I hung on for a bit longer before calling it a night.

All good stuff really and with the weather being so much brighter, the lack of movement on the job front doesn’t seem so bad. Oh, that and it’s Invasion soon too. 🙂

[ Today’s lyric – or rather sample : A Perfect Day to Drop the Bomb by Carter the Unstoppable Sex Machine. A bonus point if you can name the advert. 😉 ]