Okay, I could say I’d planned to upload a scheduled post, but in the words of Mr Callahan; “Well, to tell you the truth, in all this excitement I kind of lost track myself.” Really, one of the best quotes from prime-minster’s question time. (Ed: That was Callaghan. Honestly! Look out, Lynn’s about to go into a day dream about Dirty Harry running the country during the 70s!!)

Where was I? Oh aye, a scheduled post. Yeah, I had planned to do it, but… umm… two things got in the way. A) My complete inability to prioritise and B) how would I tell you how good last night’s Invasion was? 🙂 I’m sticking with B as my answer. Yes, final answer if we’re staying with the pop culture references.

So…. having not been up to going to Chameleons last time (Ed: booo!) I was all geared up for a big night out and Invasion delivered that in spades. Now, that is a funny saying. I could understand it if it was ‘in buckets’ or ‘via a delivery truck’. Honestly, when has anything arrived by spade? Well, unless we’re talking about cleaning up (in a Steptoe stylee) after a horse. Oh dear, we’ve drifted off again…. I blame the meds. 😉

Invasion! Yes. Umm. I’d managed to get my outfit choices down to two – which isn’t bad going for yours truly. Okay, maybe two and a half as I wasn’t 100% on my choice of hosiery. Despite being late home from work – which (understandably) wasn’t appreciated that well, I was into the Dad routine running – dog walk, bath, story, bedtime kisses, etc – before making my way to Sophie’s place around eight-ish. Bless her, she’d offered me the option of getting changed at her place, so a fist full of win: we share a car and get to chat while faffing about.

Now, orange dress or wrap dress? Umm… Wrap dress. Pink or black tights? Panic!! Black or pink tights? Black! Shoes or boots? Faff… shoes! 🙂 You get the picture. I decided to pass on risking false eyelashes and much as I do like a bit of glamour on a night out, I didn’t want to make us late – no, later! – and I’d bodged the application last time. Clearly, more practise is required! Now suitably fab, Sophie and I headed off to New Foresters to catch up with the rest of the Invaders. Luckily for us, there was a car parking space right outside, so no need to bother with a coat and off we went. 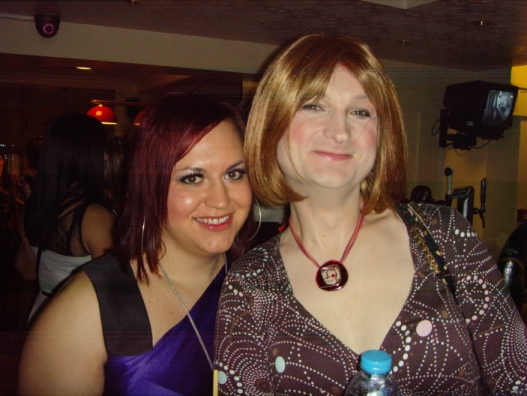 The evening was very good and I bumped into various folk (in no particular order): Emma, Kate, Alex, Sam, Maddy, Jonathan, Chrystal, Penny, Tiff, Gabrielle and at that point, my memory buffer for names + faces ran out. If I have missed your name, sorry! Time didn’t fly away, so there was plenty of chance to have a chat and mingle. I had a heart to heart with a good friend (no names) and Miss X, I hope your luck changes soon. <<>> Oh another note, I’m not a massive fan of pubs per say, but maybe it’s a case of not having found the right one. Foresters has a fab atmosphere and you can be in the thick of it, or chilling out on the sofas. Good times!

As the clock rolled round to the next hour, we headed off to a club. It was a tad cold out, but as it wasn’t far and I’ve braved worse (Ed: probably twenty years ago and if you’re clubbing, taking a coat is just a pain.). There was a brief chat with the club’s manager – in a positive way – and we were inside. The music was loud and I think I recognised about two songs while dancing away madly. Everyone seemed so young, but maybe it’s me getting on! 😀 Next time I’ll pack ear-plugs. There was no trouble and for once, the trans massive weren’t the ones in the highest heels. Everyone was really cool with us and that just added to the night.

It wasn’t long before the witching hour approached and it was time to head home. I climbed into bed just after one and I woke up – as in bang, you’re back in the room – at 8am sharp. Now how come I can’t do that during the working week? Body clocks eh? 😉

[ Today’s lyric: Telephone by Lady GaGa… which was on Let’s Dance earlier tonight and the soap actresses  rocked it! ]