As I type, I’m somewhat full of a rather nice tea. That’s the second nosh-out in as many days. Not that I’m complaining, I should add. While it might not be so good for the waistline, it most certainly is good for the soul. For the first time in a while, myself and the Ever Lovely Mrs Jones were without the nippers. Wee Man was at a sleep over and Little Miss was at Granny’s. So what to do? Well, probably what most middle class farties do: to the gastropub! 🙂 Glib comments aside, we both had a lovely meal together. I was great not to have to rush back and just relax in each other’s company. It’s not something we do a lot and I think when you get the chance, it makes it extra special.

Highs and lows at work. Mostly nothing but good news – which is nice. The only proverbial fly in the ointment is one rather stroppy customer. I still find stroppy adults a bit of a conundrum. Sure, there are times when someone really does tick you off, but to keep going off on one? I start to wonder if they need timing out. Yes, I do get annoyed at stuff, but I try not to get into a person’s face about it. I know when someone does it to me, it doesn’t make me want to go that extra mile, normally I think ‘what a numpty’ (Ed: or something ruder, but let’s move on). Why do folk like that think that by chucking their toys out of the pram, that they’ll get their own way? People eh? 🙂 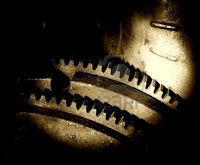 Lastly, and on a trans front. I’ve been mulling over a few thoughts of late. Don’t worry, nothing scary. There was a recent radio programme – Radio 4 I think – which featured a discussion about the subconscious and how the ‘me’ part of the conscious mind seemed to float on top of it. I rather enjoyed the thought (no pun intended) of a raft of personalty atop this complex sea of mental machinery. Ahh, I’ve got distracted again. Where was I? Oh aye, the point of all this is I wondered what cogs turn within my own head. Which bits drive my behaviour and how much control do I really have of them? Do they control me or are there a few levers I can throw to tip the balance in another direction?

So why mention the above? I had of late been looking at summer fashions. Hell, I’m trans and I like pretty outfits. Sometimes you just gotta accept and roll with it. 😉 But this time…. this time around, it wasn’t so much that’s nice, how much is it. Oh, nevermind, but more I can’t wear that. Clothes that look best with bare legs or shorter sleeves that won’t work with Wookie feet or fully carpetted armpits. To be honest, it got a bit much. I do know that that’s all a bit superficial. I think can work out a wardrobe that doesn’t require a trip to the House of Wax, because I managed it over the last two summers.

I think the trouble is this. I’m getting… tired isn’t perhaps the word… frustrated is closer. I’m feeling frustrated that how I look on the outside, is not quite right with how I feel on the inside. That doesn’t mean I want to transition or want implants. What I think it is, is I want to be a bit more in between. I don’t know what’s changed in the last few years, but perhaps some new cogs are a-turning and they’re driving a new agenda.

That moves us on to the heady subject of the truth of free will and no, I won’t be going into that. 🙂 So my question is this: how much control do you really have and if you win, what do you lose? Ahh, and we are back to the compromise comment from the therapy sessions last year. Perhaps my real question would be what price personal happiness over others? There’s a difficult one to answer.

Anyway, the sun is shining. The trees and flowers are in bloom and according to the weather folk, it’ll be good all weekend. Best get out and enjoy it.