I’ve started and re-started this post a few times, but there’s something missing from the previous drafts. I guess…. I guess it’s that I can’t quite capture the excitement from the Chameleon’s Christmas Party, so you’ll just have you use your imagination and bear with me 🙂

Given that there was some setting up to do, I managed to swing an early pass. As luck would have it, Wee Man was singing in his school production. I saw him (and the rest of the school) perform earlier in the week and they were very good. I know you’re supposed to say that as a parent, but he really did give it his all. I was really proud of him.

So, Wee Man dropped off, I over up to Nuthall to help with the setting up. I met Shimmer* and Katie (mum + son respectively – *sorry real names escape me right now!) waiting while the Keep Fit Crew occupied the main function room. I hung around to help put tables and chairs out, while the disco was set up and Sandy sorted out the food. Once the necessaries were taken care of, I popped upstairs to get fabulous. 🙂

Gaynor was already there – looking rather fab – as I started to get changed. Tonight’s outfit was a re-run of the pink dress (from M & S), black opaques and my suede stilettos. After my chat with the ladies in Boots, I tried a darker lipstick and gloss to give it a bit of shine. The blackberry nail varnish looked rather good… IMO 🙂

Talking of Boots. Lots of (trans) people went in after their visit (including me) and had a pleasant chat with the staff. Tracey (and Sarah) went last week (in trans-mode) to do a spot of shopping and say hello. They also got to meet the manager and were able to sing the praises of how well the night had gone. I’m glad they got to do that, because the make-up ladies really did get stuck in and we all had a good laugh. There’s talk about another – and longer – make-up evening next year. As a side note, I got another round of thanks at the party which made me blush. All of the above happened because a friend there, Alison, asked on the forum, if anyone knew of any shops who offered make-up advice. I sent an email to Boots and the rest is history. 🙂

Back to the party and Shimmer had got the music going when I got downstairs. The place was getting busier and busier as the time passed. I swapped to my dancing shoes as the heels where beginning to cramp my toes (we suffer for fashion, don’t we? :D) and because requests were being taken for what tracks we’d like. I said hello to a few people… including Sophie H who’d come along for her first visit. We also had a visit from the ladies from Hot Hair. They’d brought some stock along and – bless them – stayed on to have a bit of a boogie.

We had a raffle which helps to top up the funds and as way of a change, a musical party game. Basically, Shimmer would play a short burst of a well known pop track and you had to do the dance that went with it. We had the Birdie Song (pop hell), Agadoo (roll for SAN loss!), Hokey Cokey (your other left!), the Can-Can (my heels stayed on!), YMCA (easy enough) and just when I was expecting the Time Warp – the cheeky lass – played stripper music! Cue much joking about, although thankfully, everyone kept their clothes on. 🙂 It was all done in good fun and after that, the music kicked back in and off we went.

Various party faves and some ‘beat up’ 70s/80s numbers (not sure who mixed that Depeche Mode track! :D). My favourite track of the night was Knock on Wood, there’s something about the pounding beat of that number. I dunno…. in the words of Baloo: I’m gone, man. Solid gone. 🙂 Luckily when reality returned, no-one was injured… always a plus 🙂 Sophie managed to capture the insanity of some the night (thanks chuck!). Thankfully there’s no video feed of me dancing. 🙂 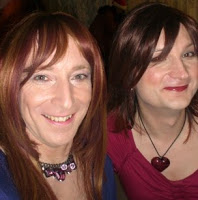 It was all a bit of a blur once the music got going… and I hadn’t had anything alcofrolic to drink either. The evening flew by and it was time to say our goodbyes and Merry Christmas’s. Upstairs once again to get changed and pack things away. That’s it for this year, but what a way to go out! Take about ending on a high.

My feet still hurt… but that makes me smile when I think about why.