The Night Before a Night Out

It’s Wednesday night and I’ve just about packed a bag. I say just about, as I’m not quite sure what I’ll be wearing on Thursday. Why do I get this? Why is deciding what to wear so tricky?

I opened my wardrobe and ignoring the bloke work shirts that are on the right, there’s tops, pretty skirts, leggings, jeans and the odd bit of sparkle. To my left, there’s the tall cupboard, which, if I’m honest, is 60% mine; filled with dresses and my only coat. Well, my only ‘Lynn’ coat, because I’m not really an outdoors trans person. Okay, mostly. 🙂

Instead, I’ve hedged my bets with an old favourite, a wrap dress that may now be over a decade old. I’ve also packed some jeans, as I’m sort of in a jeans & top kinda mood. The Ever Lovely Mrs J was kind enough to let me borrow some fancy heels. Again, I’ve a backup pair of black heels for the wrap dress & opaques outfit.

Is it Spring? It is that temperatures are not quite settled, and that we’re in that not-quite-winter-not-quite-spring-colours mood? Or is it that last week, when I’d had a quick post-outing try-on, that I got a glimpse of what could be.

The camera never lies, except when it’s in poor light and too far to see Wookie pins. The image to your right is something that’s unlikely. Looking beyond the peep of footballer’s knee, that’s me sporting nearly nude tights and a skirt I’ve slimmed down to fit into. Yay for weight loss eh?

But… I know I must be practical and bare pins just ain’t going to happen. There is, after all, The Agreement, and while it may not always be comfortable; it, like all good peace deals, keeps things settled. Settled, isn’t IMHO always bad, even if you occasionally peek over the fence, to look at the slightly greener grass.

Oddly, Chams was somewhat quiet this time around. So it goes sometimes.

Thanks to long walks between offices and watching what I eat, the weight loss has continued. Okay, I’ve not yet hit my target weight (172), but I’m around 176 at the mo, which is helping me avoid crisps, chocolate and booze. Although the jeans were skinny and the top fitted, I didn’t feel to odd, if that makes sense. Using the corset helped add shape, if that makes sense.

Anyhoo, back to Chams: Nicola and Steph from TrendCo came to visit and were kind enough to bring a number of wigs with them. If you’re around Nottingham, do give them a call: they are really helpful and completely genuine. Unlike some wig vendors, they ‘get’ the part time trans market, so while they do stock human hair wigs, and top of the line items; they have some very affordable ones of very good quality.

Much fun was had trying on various styles, including one that made me look like an old school friend. I should add of the female persuasion, I don’t need any help looking blokey. 🙂 Jo invested in a new ‘do’, which really suited her. 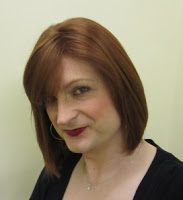 Steph was kind enough to try styling my red haired wig again, and I’m much happier with it now. It needs a wash and conditioning, before being reshaped, or teased even, into the new shape. Something for next week, if I can get some time ‘working from home’.

Considering it’s been many years since I’ve been able to have a haircut, rather than just using the clippers, sitting down to have your ‘hair’ done, is somewhat strange. Not in an unpleasant way, but a connection to the past. Not that my hair was ever styled in a feminine way. I wasn’t confident enough for that, and now, it’s not like I have a choice. Well, other than grade 3 or 6 😉

While I was tempted to buy said ‘school mate’ cut, I’ve got three wigs at the mo. The dark long bob with the highlights (my goto number), a trimmed red number and Old Ginger from yesteryear. I pretty much wear the dark one, even though it’s not my natural hair colour. Well, what’s left of it 😉 It’s funny, I was talking to Steph how the brunette number feels right for me. It’s something about the cut and the colours, that make it part of how I see myself. Well, when I’m in Lynn mode. My first wig was dark brown, as was the second one; albeit with highlights. Shame they don’t last, but at the same time, that forces you to update your look.

Given all the comings & goings, we were late packing up, but luckily not too late for the all important ‘quick photo’ (thanks Val). Something to help remember the evening by.

Next week I’m meeting with a researcher to talk about what it is to be trans. Hopefully that’ll go smoothly. Fingers crossed eh?