Just as the right wig helps break the Him Factor, so a good set of curves – up top, or at the sides and rear – can help too. Equally, for our trans-men out there, a good binder will no doubt, work wonders.

After winding up the meeting last time, I got changed, while Val kept me company. For some reason, we got on to the subject of why we pick the size of boobs that we do.

For me, mine was down to what I thought a typical size would be for a lady of my build. I’ve never really moved to full breastforms, although I know others swear by them. Instead, some medical tape (thank you Boots) and two pairs of ‘chicken fillets’ work their magic. Everyone seems to do their own thing and Val was kind enough to explain a slight altercation when planning some of her own. Her post, and I guess this is the first guest post! – is below:

Like many others, in the early days, at least from when my senses demanded that I wore a bra, filling the cups  was merely something that was easiest to hand, and was usually some old thick socks rolled up into a ball. Then, as the desire came upon me that this bosom that loomed forward in the lower periphery of my vision should have the weight, if not the movement, of what the garment was designed to contain, I started to look around for something more realistic.

It was around this time – and we are incidentally talking about 1999 – that the Daily Mirror newspaper’s “Agony column” edited by the redoubtable Marjorie Proops, printed a letter from a TV seeking advice on this very subject, and of course, Ms Proops had the answer to hand. A friend of hers who was transgender, she maintained, achieved the effect by filling a balloon with shampoo, tieing it off and then inserting it, for safety’s sake, into a second balloon, which was also tied off, the knot then forming a passable representation of a nipple, at least through the lacy softness of the bra cup.  She recommended her enquirer do the same.

At that time my work meant that I had evenings away from home, in a B&B where I was left very much to myself. So I started to get organised; two large bottles of supermarket own-brand shampoo (I agonised over tea-tree oil or jojola, then bought the cheaper) a bag full of party ballons from a stationery outlet and finally a large medical type syringe. (No needle, I hasten to add, it was not for that sort of purpose, besides, needles and balloons are generally inappropriate companions).

And one evening, I took over the sink of the kitchen area (the B&B also let the rooms out for self-catering), decanted the contents of one shampoo bottle into a beer glass, and prepared to go into boob production.

Now, as a life-long asthmatic inflating balloons is a task I do not relish, but is something I can usually succeed in doing – it’s tieing the knots afterwards that frays nerves and finger ends. But expanding one with a syringe full of shampoo is a different matter. I presented the nozzle of the syringe into the neck of the balloon, squeezed it tight with my fingers and injected the shampoo. 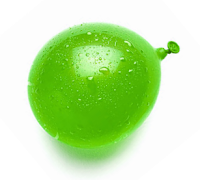 Invariably, the balloon remained its original size and a stream of shampoo erupted from the neck in one direction or another. Worse still, shampoo is slippery stuff, and it soon insinuated itself over my fingers and balloon skin. Before long I had shampoo over the draining boards, up the wall, across the carpet and a few drips falling on me from the ceiling. The balloons that were the subject of my endeavours remained resolutely unmoved, which was not the same for me.

I concluded that Ms Proops friend must have been having a laugh at her expense, or that he had neglected to mention that he had some device for inflating the balloons with air before exchanging the liquid for the gas. Clearly without mechanical aid the task was impossible even before trying to insert one liquid-filled balloon inside another. I spent the rest of the evening mopping up and the next six or eight months working my way through cheap supermarket brand shampoo, which my wife, mystified at my purchase, declared wasn’t to her liking.

So, what about you dear reader, any mishaps in the early stages you’d care to share?
Take care,
Lynn