The other day I was listening to the radio and one of the presenters was saying how rare it is, for people to get lost. Yes, feel free to make up your own gags about ‘I wish Fred would get lost’ etc. I can wait.

The presenter was saying that with smartphones, satnavs and GPS, we – or rather modern society – don’t make so much use of maps. I know I’m guilty of using a satnav, or whatever the smartphone equivalent is, if I’m going somewhere I don’t really know the way to. It is, at least on my part, down to a combination of laziness and that curious modern disease: Always Being In A Rush.

Equally, I’ll use a map to see where a place is and then plan a route. I don’t think this is quite the same as just switching the GPS on. I like to think of it as having a rough idea which way you should be going. If more business and government projects could plan roughly, which direction to go in, we’d have a lot less waste, but let’s not dwell on the impossible eh? 🙂

Ignoring cars, I’ll very rarely use GPS when out for a walk. Most of the time, I’m out somewhere I mostly know and it’s at a time, when, really, time isn’t of the essence. There’s no rush to get back and indeed, just being out and walking is the purpose. That, I find both liberating and relaxing. It’s the joy of not having to be somewhere and the chance to take in the sights of the world. 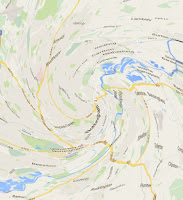 That said, there are also times, when I’ve, or indeed the Jones Massive, have been lost. Well, not completely lost. 🙂 That irksome feeling that you know roughly where you are, but you’re not exactly where you should be. “That gate and pond aren’t on the map. It says look for a path over a stone wall.” etc.

At that point, you’re faced with retracing your route, improvising or hoping the smartphone’s in a good mood. 🙂 Usually, a quick look at the map and a pause, allows you to get your breath and rest for a spell. The only time this really failed me, was when I was in London.

I thought a walk from King’s Cross down to the Houses of Parliament wouldn’t take too long. The answer is that it doesn’t…. provided you don’t go in the wrong direction. 🙂 Turns out I was headed towards Tower Bridge and those of you who know the capital – clearly a lot more than I – will either be tutting or smiling to yourself. The Ever Lovely Mrs J is usually the first to point out that if I think that’s the right way to go, you go the other way. Yes, satnavs were invented so people like me can find their way. 🙂

But, I got to see a lot more of the capital than I’d planned and, again, I wasn’t exactly in a rush. Provided I made it to the hotel before 9pm, I’d be fine. I certainly earned my tea and a hot bath that night. My feet did hurt, but if you can manage a night’s dancing in heels, a few miles in walking boots is a doddle. 🙂