First off, happy new year. Yes, I know we’re a week or so into it, but better late than never. The observant amongst you will notice that I didn’t post anything last time. Not that this is a paid for service – and that’s quite possibly a good thing, given the quality :-). It was a combination of not having much to say, not have been up to much and I was very much enjoying watching a film with the kids.

My, they are growing up quickly, which – as a friend, Val, once said – they do do that. 🙂 Wee Man is mid way through his first year at secondary school and seems to have settled in okay. Little Miss is midway through primary school and her confidence is brilliant. At the Christmas party, most of the girls went in Disney Frozen inspired outfits, or party dresses. Little Miss? Jeans, kick-ass boots and an punky anime t-shirt. There may be trouble ahead… 🙂

Thursday was the first Chameleons meeting of the year and after a whirlwind spin of baths and bedtime stories, I was off to get fab and catch up with friends. I had over packed, in that with two pairs of boots (knee boots + biker boots), I was struggling to zip up my travel bag. Like the ingress of yummy food, I’m going to have to cut down a little.

Talking of the latter, I’ve installed Google Fit to my phone – Hell, Google’s tracking my extra move as it is – and it’s working well in keeping track of how much walking I’m doing. I’m managing to get an hour, sometimes an hour plus of walking a day. Mix that in without any serious dieting and a low cal lunch, and I’ve lost a little bit of weight this week. I guess I’m impatient and would like to see the pounds come off as quickly as they seemed to have gone on! Still, you can’t eat your cake and stay svelte.

Despite having over-packed, I ended up wearing what I’d originally decided on (see snap). The Centre seems to be being redecorated at the mo, so there’s a far bit of paint about. After last time’s shots of people, I got the Big Sheet of Shame out once more and took a few photos of the unusual suspects. Val was kind enough to take a few snaps of yours truly (thanks Mrs!) and now I’ve got to remember to email those who’s picture I took. Alison was kind enough to offer some advice on my necklace choice and I had chance to wear my new earrings, which the Ever Lovely Mrs J bought me for Christmas, bless her.

After that, it was a case of tidying up, remembering to turn the extra heaters off and get changed. As I’ve now got a key to lock the place up, it’s not so much of a rush, although ironically, we packed up slightly earlier than before. I did take a chance to try a new outfit, but I’m not 100% sure yet. Perhaps a patterned top would help?

Over the Christmas period, I’ve been reading some beauty blogs and watching a few ‘how do’ videos on YouTube. I’m rather enjoying London Beauty Blog at the mo and the author’s articles are just up my street. I put two of her tips to the test last night and was pleased with both.

The first was how to apply YSL Touche Eclait (apply as a highlight, not all under your eye and blend blend blend). I was lucky to spot that make-up classic on an Amazon sale and that was too good to miss. 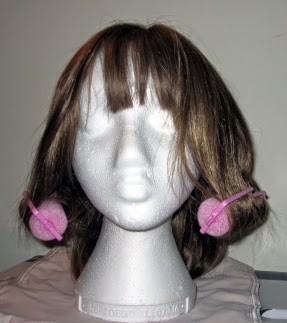 The second tip was to apply your mascara in stages. Previously, I’ve always done all my make-up – well, bar my lip liner and lippy (lip liner rules…. well, so long as it matches your lippy!) – and done one coat of mascara and left it. This time, I followed the advice and did one coat, then sorted my blush, highlighter, etc, before coming back a second and thinking about a third. I did think this might make it look a bit piled on / dead spiders, but it didn’t. I felt my lashes take on a better curve and if anything, they were far less clumpy than usual. I shall be sticking with this approach from now on.

In an effort to get some bounce back into Old Ginge, I found myself applying rollers to my old wig. I guess next time I’ll be thinking of a hairnet and going to the shops in my slippers…. or is that a bit too Northern? 🙂

In other news, I’ve got a new job. Well, a new one at my current employer (which keeps the pension and working conditions on track nicely). We’ve had a reorganisation and despite my best efforts and fighting against the process, for the last two years, it’s felt like my job was continually being dumbed down. Anyway, regardless of giving what I felt was a crap presentation, I was successful and I move to a new office and new team (with some work mates), at the end of the month.

Last summer, I was involved in a big project, which let me do what I love doing. Organising, chairing meetings and building solutions. That put a spring back in my step and – as I said to my new boss – I came to work with a smile on my face. I was keen, eager and happy. Those who know me, will know that’s not my usual outlook. 🙂

So while it’s been the first week back at work after a long Christmas break, I am for the first time in a long time, hopeful. I am looking forward to the new role. I know it will be tough at times, they’ll be a learning curve and I know my old boss won’t want me to slip away easily. Not that he’s a Pointy Haired Boss (see Dilbert), he’s not got staff to fill the gaps yet and it’s best not to burn your bridges.

[ Today’s quote is from Harvey Milk ]