My brain is all of a spin at the moment. It’s been a little full on at home and that’s even with leaving work slightly earlier than usual. There’s no major drama going on – thankfully! – I think it’s more just one of those evenings where it’s 60mph all the way until after tea. Then we’re into teeth brushing, PJs and story time.

I also had a surprise visit from a friend, Sophie, who was in the area. Having not been 100% well, she missed the Chameleons Xmas Do (more on that in a bit), but didn’t want to miss saying hi before Christmas and returning the favour with the festive gifts. I’d dropped mine off last week, although one wouldn’t go through the letterbox. Agh! Planning fail! 🙂

Anyhoo, we had a good chat over some tea and flapjack, while the kid’s pudding baked in the oven. All went well and after Sophie left, Mrs J said to me that she really didn’t recognise Sophie from before at all. Clearly being full time’ for two years has brought quite a change.

Talking of the Ever Lovely Mrs J, I have tried to do the right thing this Xmas and I’ve used my Shoe Fund Stash, towards an e-reader that I know she really wants. Yes, I love shoes and shopping, but I love her more. I can always save up again and… umm… it’s not like I’ve not bought something at least once a month this autumn, so maybe this will help me appreciate what I do have, rather than looking towards items I don’t really need. Christmas and all that. 🙂

Squeezed between work parties and children’s school plays, the Chameleon Group had their annual Christmas party. Luckily for us, it fell in December (yay!) and it was also our last meeting of the year (boo!).

Lots of people turned up, so the place was very busy. It was great to see some of the new people back again and also the regulars too. The tables had been nicely decorated with tablecloths and nightlights. Plus, a large table of food had been laid out for everyone to nibble at, as the evening went by.

I’d had an early evening pass as Little Miss needed to be dropped off for her last performance. I was lucky enough to see her singing in the school production the night before and although she’s tired from a series of late nights (normally she’s in bed by 8PM), she said she loved it. At the Xmas party, this put some of us on into talking about school plays and whatnot. 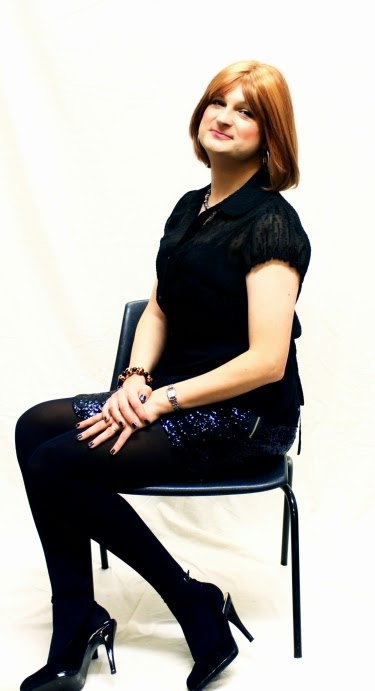 Outfit-wise…. I had packed my red dress and a selection of heels / shoe boots. I have gone back to my red/ginger/strawberry blonde (!) wig as I’m finding the cut more forgiving. That and a few people have said nice things about it, so that’s convinced me to stay on this route for a time. I guess ideally, I’d like hair (!) a little darker, so I’m wondering if any of you have had a wig restyled and cut. If so, how did it go?

I also, took a risk in buying some sequin skorts. Yes, skorts. For some time, I’ve thought about getting some short shorts for a Christmas outfit because who doesn’t like a bit of sparkle at this time of year? Heels, hemlines and hopes are high in December. I saw some at a knock down price and after a talking myself out of buying them…. I then threw caution to the wind and thought I’d give them a go. Hell, if they didn’t work for me, I could always send them back right?

I don’t often wear short skirts because I’m in my early 40s and I’m conscious that I don’t want to look tarty. Seriously, this is a worry I have. I also, don’t want to look like a spinster from Downtown Abbey. Go figure. But regardless of crossing a particular personal line in the sand, I felt pleased with them and the evidence is to the right.

Why am I sat down? Well, I’ve got my back straight and given the extra weight I’ve put on recently, it’s the most flattering picture I have from the evening. I know, we’re our own worse critics. I was saying as much to Kim earlier. I really must start eating more healthily and watching my weight…. rather than watching it go up, which isn’t helping. But much as I’m getting to be at risk from drive-by attacks by Japanese whalers, I think the diet is going to have to wait until after the 25th December.

But, despite my grumbling, on the night, I was happy with my look and I felt confident all evening. I felt the night was a great close to the year and our next meeting is in January 2015.