Once more into the Blogger interface, dear friends, once more. I could continue to torture that fine piece of English writing, but probably best not too. 🙂

I’ve missed a week, given that the Jones Massive were away on a much loved holiday. A week away over half-term, somewhere up north and on the coast. Very windy, rainy and somewhat cold to boot, but that didn’t put us off. I over pack for Thursday, so we’re not short of coats and waterproofs. However, my T powers must have been a little off, because the Ever Lovely Mrs J had to nip in and by some extra scarfs and gloves for us all. Still, brief periods of horizontal rain aside, much fun was had by all. Forest parks, cream teas and long walks on the beach.

Our week away was also Mrs J’s and my wedding anniversary. Not quite twenty years together, but we’re getting there. I did manage to sneak some new jewelry into the luggage for her, because she’s worth it. Not every wife is as cool nor as accepting and I feel very lucky to have found her. If I hadn’t, I doubt I’d be as happy as I am, nor probably as tired, as my lovely kids like to keep me busy, bless ’em 😉

October was also another little anniversary. Back in 2005 I started this blog and, nine years later, I’m plodding along still. How life has changed. We’ve two kids now, both young, but certainly growing up into fantastic young people, and each very much, their own person. I’m a bit wider than I’d like to be, but that may be as much the holiday, as middle age. 😉

Each time I prune the Blogs I Follow list, I feel a little sadness, that there’s another one gone. I guess all things have their time, and maybe those who have stopped blogging, have other things to do with their lives. Maybe they are content with who they are, or are busy, that they don’t have time for it. It’s part of the reason I started the Our Different Journey story collection, although, perhaps, interviews would be more accurate. People come and go, yet having a record of those I’ve been lucky enough to meet, is for me, at least, good to have.

This month, Calie, she of T-Central fame, was kind enough to ask me to put a few words together about this blog and also about me. Well, the post is now up, so if you’re a new reader: hello 🙂 As the post says, I thought it would be fairly easy to rattle off a few lines about what YATGB is and me…. but it wasn’t. Part of me felt – and I still do – that this was a bit of an opportunity. I could blah on – as I am now – or, I could take the chance to put a message out. I’ll let you read the post and make up your own minds.

Oh, one thing that made me chuckle, is that one of the T-Central bloggers, has taken three of my photos and it’s a bit like a short history of the looks I’ve tried. I did like being a redhead, although I think a darker version would work. If you look from the right to the left, it looks like I’ve grown my hair out. Which, I think is quite an achievement seeing it’s artificial. 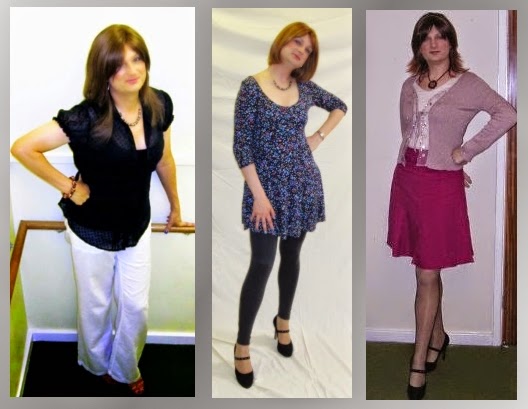 Too fab for one gender? Then why decide!
In other news, a Facebook friend put a link up about The Mirror’s article on being ‘bi-gendered’. From a positive stance, I think the article is well written and is sympathetic. Props Ria (Ryan) and Krystal, her partner, on coming out. Also, to The Mirror for getting it right, IMHO, because the piece is a far cry, from some of the horror stories (pardon the pun), put out by other aspects of the media. There’s video from a well known daytime TV programme too, which adds more and is worth a watch. Oh, you may need to enter your UK postcode (assuming this isn’t on YouTube somewhere).
Do I get the term? Hmm…. I’m not sure. Not from I don’t believe it’s a real thing, nor to snub Ria’s own identification. Maybe I am old-fashioned and I’m Trans 2.0, and the next generation are Trans 3.0? There’s a gap for a Star Trek gag if you can be bothered (to go fabulously where no one as gone before….!) 🙂 So, iffy gags aside, is being bi-gendered a bit like being trans-something-or-other (waves) and being out? If so, I think I can get my head around that. I am, for the most part, in the closet, but if being bi-gendered is the next wave for people who don’t want to be full time A or B, then I think that’s very cool. Whatever it is, good luck to the pair of them.