The other day I was reading an article on BBC News with the title Graduation photographs offer ‘digital slimming’. A bit of retouching for graduation snaps: teeth whitening, removing blemishes and, now, being digitally slimmed down.

I do wonder where all of this Photoshopping – to use a modern word – will end. We all know about ‘shopped fashion shoots and the mascara *ahem* adverts. I’m waiting for a flying car to be advertised and then see the famous words: enhanced in post-production. 😛

That gripe aside, who are we kidding? Is it the people looking at the photos or ourselves? I mean, if I could tweak my photos (more on that in a mo), am I moving further from reality into fantasy, or am I just amending the balance here and there?

For the record, the only photo editing I do on my snaps – which I why I can use them to keep the kids away from the fire 😉 – is changing the colour balance (because flash and overhead lights aren’t always a great mix), removing awkward signs (fire escape this way, etc) or getting shot of red eye.

On the other hand, I did have the good fortune to have my photo taken by a professional – any many years ago that was too. Debbie did a grand job with the lighting, getting me to (just about) smile and then giving the finished snaps, that magazine glow. I can’t complain and I think she did it well enough, so that I didn’t look unnatural.

Regular readers will know that I ran a blog called Our Different Journey a few months back. The idea, for those of you who don’t know, was to ask the trans people I know a few set questions about their life. This was partly because I know that I do meet a fair few T people and through the years, we do lose touch and in some little way, this was a bit like a personal record of people I’d met and I thought they had a story to tell.

Perhaps not all It Gets Better, but I wouldn’t be being honest, if there wasn’t a little part of that. Most of the trans folk I know are regular, well adjusted folk, who just get on with their lives. Some are occasionals (waves hello), some a part timers and some are transitioning (or have finished in some cases).

Despite a good start, and a few later leads on volunteers, the site has been very quite for nearly a year. To that end, I’ve closed it off to the general public. Partly because someone was reposting the notes without asking and also because the site had gone all quiet. I may move some of the stories to this blog, under their own section, and time will tell on that.

Despite my initial thought that I didn’t need another pair of heels…. I did fold and buy them. I couldn’t resist the cute mid heel and that they were down to a snip at twelve quid (that’s more than half price off). Armed with a browser and an intent to buy, I picked them up Thursday and had a spring in my step as I took them home. 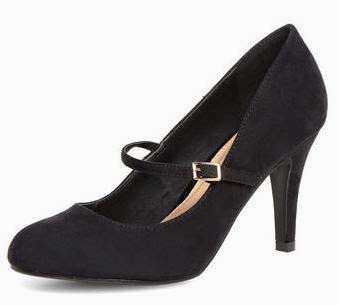 I’d ordered two pairs – one pair in an eight, the other a more sensible nine. I can never tell with shoes from Dorothy Perkins. Sometimes they come up big and if the shoe’s not a good fit, it’s a pain to walk in. Anyhoo, the eights have gone back and the nines were spot on. Easy to walk in and not too tight either.

The Ever Lovely Mrs J tittered with delight when I showed her them. Another black pair? she teased, and with a little front strap too.  Never let it be said that I don’t have a favourite design and I’m looking forward to planning an outfit around them too.