This week’s Blogger Challenge is to talk about food. Where to start with this one? 🙂

People’s relationship with food seems, to me at least, as varied as there are people. It’s – not to be Master of the Obvious – something we cannot go without. Okay, if you’re a sparkly faced sun dodger, maybe you drink, you fictional pedant, but it’s still food, even if it’s not eating 🙂

I’ve been fat, I’ve been too thin and now, I’m probably on the heavy side for my height. The thing is, I love the varieties and wonderful combinations of flavours, scents and textures that there are in the culinary world. I’m not a portion size queen: I’d rather have quality than quantity. The Every Lovely Mrs J is of a similar mindset, we’d both happily sit and enjoy a small, but very tasty meal, than go to an all-you-can-eat gig.

I find other people’s views on food very interesting. It seems strange that food can be politicised: vegan, organic, GM, intensive, etc. Then there’s the pseudo-science diet BS that floats around and occasionally makes its way on to the TV as a valid lifestyle choice. The Ever Lovely Mrs J works in science and in the same way I see a Hollywood film showing computer technology and I roll my eyes, so it happens too with Mrs J and some of the crap that’s peddled as nutritional expertise. Not that we judge in our house… until it’s been peer reviewed 😉

Then there’s the gender of food. Now, I don’t mean Sausages are from Mars, Quiche is from Venus. I remember being at school (single sex grammar – really I should be an MP 😛 ) and hearing the choices available if you didn’t want to play army. Sorry, did I say play army? I meant to say ‘Student Cadet Force’ where you march around the playground, roll about the mud, shoot and…. play at being in the army.

Where was I? Oh, choices. One of the lads in my class said, I hear the High School are having cooking lessons. Cue a few choice remarks some some of the boys and a somewhat surprised reaction from the form master. To his credit, the lad said, well, if we can’t cook for ourselves, what happens when we leave home, or go to college? Are we supposed to live on chips? Good on him and yes, I did offer a few questions to those who though living on chips was a good idea :-P. Sadly, due to clashes with other lessons, the cooking never came to pass. But I mean, really, roll about in the mud and be shouted at, or be in the warm, make something delicious to eat and hang out with girls? Is this even a question!? 🙂 Perhaps there are some girls who looked longingly from across the street and wished they were allowed to wear army camo, shoot a rifle and roll about in the mud. Who knows…. 🙂

So, no, I don’t consider cooking to be a girl’s hobby or woman’s work. From a cynical point of view, a person needs the ability to be able to look after themselves. To not be able to cook, clean your own home or look after your own clothes? That’s a pretty poor state of affairs IMO. What’s wrong with being able to run a house or look after kids? But then, maybe I’m biased. 😉 That’s not to say I like cleaning or Hoovering, but that’s ‘cos I’m lazy 🙂

Obligatory Report and Photo from Thursday Night Out 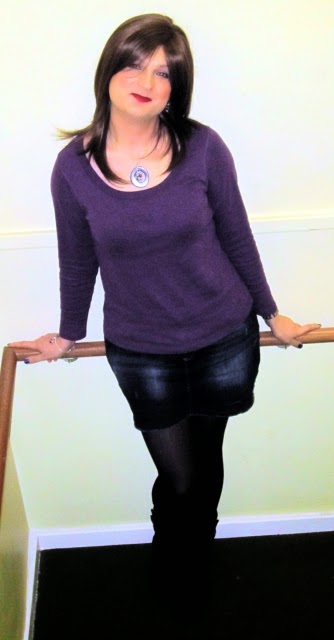 All went well going to Chameleons this week. I wasn’t too late leaving (the kids were all fine for an early bath, story and then Lovely Mummy J tucking them in), and I had my outfit choice down to one. Well, one-ish. I had a top I wanted to test and I also wanted to know if my office dress would still fit.

We were due a visit from a jewellery vendor, but they didn’t show. I checked the group’s email and found out that they had transport problems. So be it, these things are sent to try us, I guess. Oh, talking of jewellery, I popped into town after my interview to get my ear pierced. While the place was open, there was too long a queue, as I had booked just a half day off. So, no dice – or earring – but with luck, there will be time next week.

Oh, talking of interviews, the job wasn’t really me. It’s pretty much the same money that I’m on now and more slightly more third line support work than I’m doing now. The prospects look okay, but the hours (which the agency had failed to mention) and the nature of the business felt…. not quite me. Those doubts aside, it seemed okay and the interviewers were nice enough (even if one kept leaving to due ‘a system issue’). The easy part is, I’ve not heard anything from them, so I guess the job’s not mine. Fair enough, that makes the decision to move so much easier 🙂

Thanks to Alison for taking my photo. It seems my love of food means that I haven’t managed to slim into my office dress. Ah well, maybe more walking and less eating are in order.