It’s Friday night again and it being February, Winter is giving us a last hurrah before the gentler turn of Spring. Except this time around, Winter’s invited its best mates High Tide and Climate Change to the party…. and they’ve all been watching Changing Rooms with Keith Moon. This is not going to end well. 🙂

Glib comments aside, it’s not to bad here. Yes, the wind and the rain are rather strong, but by no means are the Jones Massive – nor any of our clan – bailing out, or having to be evacuated due to flooding. I know it’s very British to talk about the weather, but there are times when there’s a point, rather than an conversational opener. I’m not affected by it – so far (fingers crossed) – however, that doesn’t stop me thinking what we could be doing to help those that are. I find it annoying that our *ahem* Great Leaders have flocked south west in search of photo shoots and a chance to Be Seen Doing Things. Things like saying soothing words, walking about, looking at things, saying more soothing words and…. being audibly mauled by the victims of the cuts and failings of an environmental policy. But don’t worry, it’ll all be fine because money is now being found – as the River Thames is now slowly rising and the posher parts of England may be at risk. Cynical? Moi? 😀

Wee Man did well this week. He stormed one of his English tests – no, not how to talk about the weather – but after some top suggestions by the Ever Lovely Mrs J, he seems to have listened and followed her advice. The result? 98% in his test. Good lad. Oh, and the team he was in for an inter-school competition won gold medals. That really pleased him, which is great, because the Jones Massive are not very sporty.

It was Mrs J’s an our anniversary this week – bad planning on my part, I mean, what numpty starts going out with a fancy lady just before Valentine’s Day eh? 🙂 We’ve been together twenty years – although we didn’t get married until the late 90s. We’re almost at the point were we’ve been together more than we’ve been alive. Funny, I couldn’t – and don’t want to – imagine life without her.

We were scheduled to have a visit from Glitz & Glam this week, however, with the weather being rather scary, Sally emailed in to say she couldn’t make it. Apparently, things were worse in her neck of the woods, than down here. Nevermind, that’s been put back a month and next week we’ve a visit from a shoe retailer. I’ve put in a request for some daytime shoes, rather than the more…. disco… versions they sell.

I spied a dress in the sales and after checking the finances, I asked if I could order one. I’m not one of these blokes who just goes and buys expensive things on a whim. I’m a bit like that with sarnies for lunch – although I do feel they should be more of a treat than an expectation – so I like to check first. Anyhoo, bless her, Mrs J said I could have that for our anniversary. Ladies, the way to a trans partners heart is through their wardrobe…. and not in a Narnia kinda way, either.

I got a text on the Thursday morning, saying that my item had been delivered to the local shop, so that made it perfect timing for Chameleons. I had already packed a bag, but I’d had one of those what to wear? moments. You know the one, you open the wardrobe, see all that you’ve got and struggle to put an outfit together. I’d planned two looks because my T-Powers were on the blink that day. Something a bit office smart, because it’s nice to have a break from a dress, and also something more casual, because much as I like heels, sometimes biker boots rock more. 🙂

I was also a bit naughty in that I treated myself to a matt red lipstick. I’ve been seeing this look for a while and thought I’d give it a spin. Bold lippy isn’t something I do very often, but I was pleased with the colour and how well it lasted. I had hoped to get a Poppy King Rain Drops Lip Crayon from Boots, but apparently that had been a limited edition. Doh! So I went with Number 7 instead. I’m not usually a fan, but this worked just fine. The colour didn’t bleed (probably helped by a lip liner pencil) and lasted all night (probably helped by LipCote). All in all, both items made me feel rather special and it’s difficult to put a price on that.

Oh, talking of money; the new membership fee for Chameleons came in last night. Rebecca was kind enough to be door monitor, so it was a case of paying as soon as you came in. No chance for anyone to slip by and slip out. With her diligence and a pretty packed night, the funds did well, which is good news.

In all the fuss and introspection of last week – oh, and thank you all for you advice, it was both kind and helpful of you all – I missed on last time’s Blogger Challenge. The task was to share you most loved, or most hated, book.

I used to read a lot. Much more than I do now. I always say you make time to do the things you want. I don’t want much TV, but I do spend time reading blogs, writing this one, messing about on social media, watching old cult series on Netflix, or playing the odd computer game (mainly the big sandbox games).

I read a lot of fantasy novels as a teenager. Some were great, some pulp, some terrible; but they did what all good books do, IMO, and that is they take you away. I don’t know about you, but when I really get into a book, I stop seeing the words after a time and my imagination seems to run things instead. It’s a great feeling when you get there and I think that’s a sign of a really good novel.

I got into a bit of a reading rut as a teenager. I tried horror, but it just wasn’t scary. I guess a heavy diet of role-playing and horror films made me shrug. Thrillers? Well, I know some folk like them, but to me, they felt a little like a chase scene stretched out and I couldn’t get into them. 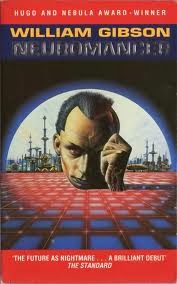 Then a friend suggested I tried William Gibson’s Neuromancer. It looked like sci-fi, which wasn’t really my usual poison. I mean, space ships, laser guns and stuff? Seen that in Star Wars, right? I gave it a spin and how wrong I was…. 🙂 I remember sitting down on the sofa at home on Saturday morning, with a copy from the local library… then it was tea time. I tore into it.

Did the book change my life? Did I have a  Moment of Clarity? Not so much in a dramatic way, but it did alter my view of books. The world – in the book – was not a nice place. It wasn’t good versus evil, not in your classical fantasy sense. Here, everyone had their own agenda and while a lot of the characters were flawed, they had personality. No-one was bad because they were, there was a reason rather than an author’s foot note saying Evil Bad Dude. The characters felt like people, rather than stereotypes. Ironically, as the cyberpunk literature would rise in popularity, clichés would begin to appear, but then isn’t that true of anything that becomes popular?

After reading that, I read more and more sci-fi. I tried a few more fantasy books, but…. I felt like I’d burned out. That I’d read so much that that ship had sailed. I just couldn’t get into them and even to this day, if I try and read a fantasy book or play a computer game that’s set in that world, I really struggle and more often than not, I give up. So yeah, that book did change how I read and still has.

The other day someone asked if we were living in a world that the cyberpunk writers wrote about. We may not have virtual reality, but connectivity is pretty much everywhere in major cities. We have our smartphones rather than our implants. Wearable computing seems to be THE NEXT BIG THING – or so the IT media and resellers are telling us. 😛 Most of us happily upload where we are, what we’re doing and who are friends are to a company who uses that data to push adverts to us. Our government security agencies regularly collect our Internet data and most of us are not upset about this. So, yeah, I’d say we’re living in the future, but it’s still better than the 80s 😉

The only exception to my failings in fantasy is The Hobbit. I read this to Wee Man a year before they announced the film – just by dumb luck. I think reading to children is a different thing than reading for yourself. Both the Ever Lovely Mrs J and I read to both our kids. We’ve done so since they were old enough to sit and listen. Thankfully, they are both of an age were we can read books with chapters to them. That’s not to say I’ve not loved reading Room on the Broom, Smelly Bill, Captain Pike & the Baby or The Gruffalo to them as they’ve grown up. I may end up keeping a few as they grow up, because there’s something wonderful about children’s books and the emotions – joy, giggles, sharp draws of breath as the hero struggles, etc – that kids show when read to. I’ve been through Roald Dahl’s works and even now, I still love reading Fantastic Mr Fox. The copy I owned as a child, that feel to pieces, I’d read it so many times. Now, it’s more a case of knowing which silly voice to do at the right time, rather than worrying if the pages will drop out.

What about you? Bothered about books, or do you prefer other media?

[ Today’s quote is from William Gibson, speaking in The Economist ]