It’s been a quiet week this time around. On Tuesday night – or Wednesday morning? – I woke up feeling very cold. Not the sort of cold you get when you’ve kicked the duvet off, or the heating’s packed in either. Ah, hello random illness! I’ll go prepare the spare room shall I? 🙂 I’ve been off all week feeling somewhat rough, very tired and unusually, not hungry. A small joy in all of this, although I don’t seem to be getting thinner. Perhaps all the loafing around and sleeping hasn’t helped the old walking routine.

Now, I have thankfully [touches wood] only had a few minor blips with my health over the years. Perhaps not a bad thing considering my mild hypochondria. It’s a Virgo thing, although that might just be a symptom of something more serious… 😉 Weak gags aside, a broken arm [jumping on the sofa], a few bouts of food poisoning [death by egg? 🙂 ], the depression [ now long gone. Yay! ] and my broken collar bone [ car crash ]. So dare I say, I’ve had it pretty good compared to many folk.

Despite all the time I’ve had on my hands, I’ve done very little, except lie around, sleep and wander about doing that non-hungry cupboard search. You know the one, you go and look in the cupboards, see there’s nothing that catches your eye, despite enough items to feed a small nation. Then you go back five minutes later, hoping that – as if by magic – the items have reshuffled themselves into something more interesting 🙂

But that’s not really what I wanted to talk about, although to does – I think – lead into it: my relationship with my body. At this point, I’d like to say that a few weeks ago I read a young lady’s post entitled Dear Body. It was a very interesting read on her childhood issues and how she’d grown to become used to and finally like elements of how she looks.

That made me think. Being trans, our – okay, I’ll stick to writing about how I feel, if you feel different, you know where to comment :-). Being trans, my relationship with my body has been complicated. Early childhood, you body didn’t come into it really. Provided you have enough get up and go, you were off and that was that. In later years, I learned that I wasn’t as strong as the other boys and my football ability was pretty poor. Mind you, what they gained in ball kicking excellence, I seemed to make up for in building Lego, or drawing (badly, but creatively I guess). 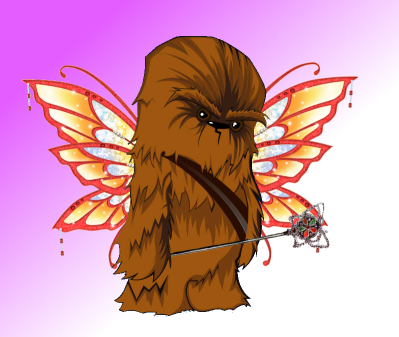 Skip to the teenage years and the Wookie Fairy descends on a moonbeam and sprinkles you with magic…. in a strictly non-vile way, I hasten to add. Say hello to body hair, smells and spots. I’d make a gag about being an Ork, but I got a complaint from the Goblinoid Working Collective last week and they were pretty miffed about such stereotypes. 😉 As a teenager, I wanted to be tall – just like my mates – yet there was also a bit of me, that didn’t want to be tall. Would I be more passable if I was shorter? Ah, welcome to the mask, kid. Learn to blend in, keep your legs furry, your hair short and keep your head down 😉 Well, maybe item one, but the other three, not so much. Oops! 😀

So there have been times when I’ve been less than pleased with how I look. But, looking at the situation sensibly, things could be a lot worse. I’m healthy and daft as it may sound, I don’t rue being a guy. I wouldn’t be married to a very lovely lady, nor have two fantastic kids, if I’d taken an different path through life. I’ve got a big jaw, but then from an armchair psychology point of view, men with such features seem to go further in their careers. Maybe that’s true, maybe it’s not. It’s not like there’s a control subject we could compare the breaks to 🙂 Foot-wise, the Jones family will always need snowshoes in the winter. The Jones’ men do not have big feet, so I’m nine, sometimes an eight, which makes buying fancy shoes fairly pain free.

As side note, I took Little Miss to a swimming party last week. She was so pleased with jumping in and out of the pool, I ended up taking her – and Wee Man – to the pool in the nearby town. Much fun was had by all and seeing Joe and Joanne Public in all their various shapes and sizes, is one way to put your own body issues to rest. One thing I did notice, is how lucky I am in the body hair department. Sure, I’ve got more than I’d like, but if I was like some of the guys there, I’d need to start shaving mid-afternoon in order to be ready for Chameleons. Small mercies eh?