It’s Friday, it’s fifteen minutes to ten and I’m on the wrong side of warm. I don’t know if it’s my vague Celtic ancestry, but I’m not one for hot weather. Sure, a bit of sun is nice and to see the trees and hedgerows all green, is rather nice. Still, only two months or so to go, and things will start to cool down. I’m rather looking forward to that. Sorry, sun worshippers, I’ll always be an autumn person. 🙂

So, with the obligatory comment about the weather, what shall I prattle on about? Well, I didn’t make it to Chameleons this week. I was packed and good to go, yet I decided to hang back to attend Wee Man’s school concert. By the time that finished and we made it back home, it was nearly nine at night. Throw in another half an hour travel time and really…? Much as I’d like to have seen everyone, I think it would have been a flying visit. Better luck next time eh? 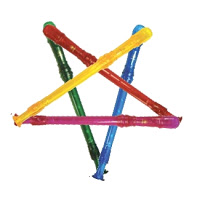 School music concerts are a tricky thing – both for kids, and parents. Nerves and boredom, but enough about the children. 🙂 Despite the obligatory chorus from the Satanic Pipes of Discord, or, to use more well known phrase, Recorder Recital, it all went rather well.

The local school noticed that a number of boys just didn’t get the whole music performance thing. Or rather, didn’t fancy piano, trumpet, Satan Pipe recorder, murdered cat violin, etc. No, they seemed – and I’ll include Wee Man in this catch all – in need of something with more oomph. Enter a local chap who plays electric guitar and the drums.

Sure, it’s a few bob for the drumming lessons, but I think it’s great to hear Wee Man’s stories of how much he (and his mates) have enjoyed playing. They don’t just work through the book either. The chap in question, asks them to pick out rock & indie tracks that they’d like to learn. He does seem to enthuse them and I think that’s a great skill.

The rock section didn’t come until the end of the evening, but it was worth waiting for. Not just for the whole “that’s my lad up there” schtick, but for other kids too. One pair played an AC/DC number rather well and you could see how much they and the audience were enjoying it. Good times.

Work also threw in a positivity seminar….. and yes, I can hear your collective lips curling from here 🙂 Much as I dislike psychobabble and sticking-plaster theories to cheering the great unwashed up – or to use the correct term, employees 🙂 – I think the talk in question was very interesting. Maybe I should branch out, ‘cos a lot of it was just common sense, anecdotes from BBC magazine and some CBT without the technical terms. 🙂 But it was still worth listening to – at least in parts. The idea that you can decide if you want something to upset (or not) and that it is easy to be negative. Both seemed reasonable statements – in general – although no doubt the trick will be in getting yourself to follow those simple rules. Something to work on perhaps?

In other news, it is Sparkle for this weekend and no, I’m not going. To be honest, it doesn’t quite fit in with family and finances. Not to mention it is smack back in the middle of the Jones Family Party Circus. I don’t know what they put in the water eight to ten months ago, but it ain’t right 😉

So, no. I shall be putting my feet up at home and then sorting out the catering.

Not sure which will be more tiring if I’m honest 😉