A bit of a different week this time around. Rather than facing the commute along the ring road, I’ve been at home working. Well, on a training course. It was all very modern and made me think that in some small way, the future had arrived. 🙂

Rather than travelling down to Dat Lundun,  I had the chance to try a remote training session. Basically, crank up the Analytical Engine and PigeonNet… sorry, I’ve been reading SteamPunk again… start up the PC, say a prayer to the Digital Pixies and hope the Broadband Goblins aren’t chewing on the lines.  Low and behold, my screen was filled with a video feed of the classroom, which you could easily emulate by sitting on a very tall stool at the back of the class and occasionally putting your fingers in yours ears. 🙂

Anyhoo, the IT massive fixed it and it all went well. It was different, but not in a bad way. To be honest, once the session worked, I was fine with it and it meant that I didn’t need to be away for a week (meaning the Ever Lovely Mrs J wasn’t too put upon for extra school runs) and I didn’t have the faff of being away either. All good!

Oh, chuck into the mix that I managed a full dinner hour (at home) without any pesky calls or clock watching, it was rather good. Indeed, I managed to get out for a quick jaunt with The Hound, who was very happy to get an extra walk during the ever improving weather.

This Thursday was Chameleons and I was lucky enough – thanks to the kindness of the Ever Lovely Mrs Jones – to get away earlier than I would usually. That little change seemed to make all the difference and I rolled up with plenty of time to get ready. Unusually for me, I had one outfit packed….

okay, one and a half. 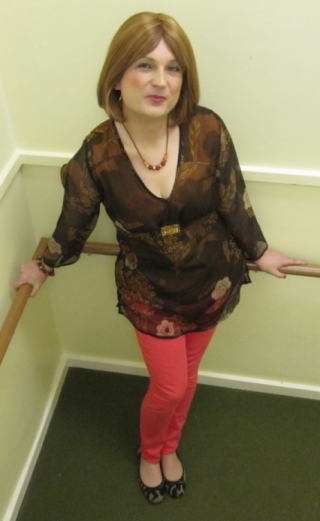 …. namely colour pop jeans and a small collection of tops. I wasn’t sure what the temperature would be like, so be prepared and all that. I also packed those leopard print flats I bought the other month in the sale.

I was just finishing my nail varnish when Pat popped in to say our visitor had arrived. The group had had an email from a clinician – I think I’m right about that – who wanted to discuss our experiences of the medical practise and associated care; care from a psychological point of view. So I popped down and did a few introductions etc and let her to chat away with folk.

After coming back with a drink, I heard that one of our number had challenged – let’s call our visitor Dr C – on the nature of the work and – please don’t read this next line harshly – “what good will it do?”

I didn’t get to hear the whole conversation, but I think that the party in question feels that it is all well and good [these studies being done], but what really changes? Shouldn’t we be trying to get the Man In The Street to accept us?

This caused a few questions (in a good way) and – as I found later on – had made Dr C look at her research and plans from different perspectives. Again, not in a I’ve got it all wrong stylee, but more how the research could be different, when you take that point of view into account. So, we chatted about this, that and the other – from a trans point of view – and various people came along, said hi and added a few comments. Dr C says she’ll be back at some point and will mingle more. One thing I did try to stress was that while there are stereotypes, there is a hell of a lot of variety of backgrounds. Yes, we have some commonality, but our final destinations, if you will, are as varied as the next person.

One thing we did talk about, was what is the tipping point? At what point does something in society, become okay, or even the norm? Is it a case that a few brave trans souls, take a deep breath and go out to face the world? Is it then the proverbial trickle that’s now a flood? I mean, look at the social scene of the previous decades, against the far more out & proud events such as Sparkle et al.

What about acceptance? I don’t mean self-acceptance, although really, I think that has to come before you can hope to make it out of the closet. Does it start with a few good folk saying it’s okay and then the right-on folk (yes, I’m one of them 😉 ) follow? Then tolerance/acceptance are encouraged through company policies….. and by that I mean that there are rules (not just social ones) where discrimination is bad (and not just because someone will sue our arses 😉 ).

Then there’s the view the media take in all of this. Some media pieces are wonderfully positive and informative. The bad ones, well, let’s not go there! The bad ones, I think – no, I know – I switch off, although I have noticed that the truly negative ones, they do kick up a storm over in non-trans social networks…. which I think is a good thing.

As someone who is still very much in the closet at work, and to a large part, outside of my trans circle of friends, I get to see/hear the occasional moan from folk who feel the Politically Correct Agenda has gone too far. I find it both fascinating (I’m the enemy within) and also a little disheartening too. Yes, I can understand that there are times when it’s possible to feel that a certain section of society are being held up for a better treatment than others. Yet, as someone who is an Occasional Other, for someone to make the effort for you to be treated like everyone else – i.e.: with respect – it’s great.

I know of a chap at mate who – in his own words – is a bit freaked out by blokes dressing up. Is that ignorance or the tip of the iceberg of disgust? I don’t know and I’ve not challenged him on it. I did ask why he felt like that and to be fair, it seemed it was more the fear of the unknown, rather than something nasty.

Not sure if I put my foot in it during one meeting. Someone asked why we had to have all these special days or emails going around. Well, so long as we need International Women’s Day, the words ‘closet’ or ‘out’, we’ve a little way to go. 😉