I’m posting a bit later than usual as I’ve been messing around with the Facebook code within the blog. I guess I just got my geek on and got lost in the idea of finding out who was hitting the like option. Ho hum. Something for another day perhaps! Maybe it would just have been easier to ask, but never mind eh? 😉

Earlier in the week I had the good fortune to finish a little earlier than usual. I’d gone to a customer site and having made a bit of progress on what the problem was (Ed: some IT thing. Just don’t ask, ‘k?), I wasn’t going to make it back to the office to do any real work – at least, that’s my excuse and I’m sticking to it – so I headed home….. via the shops.

I’d had my eye on some new heels, because shoes cure all ills and there’d be much more love in the world if people realised this…. 🙂 Where was I? Oh yes, shoes. So, with the new season in and I noted from on-line, a sale too, I headed to Dotty P’s to see what they had in. I hadn’t quite made my mind up what I was going to wear Thursday night (it being Chameleons), so I was on the look out for a short(ish) denim skirt. No joy on that, but I did find some lovely heels. 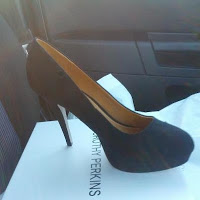 Now, as I’d come straight from work, I was – perhaps somewhat obviously – in bloke mode. Still, I think you get to a point with the whole trans shopping gig where you just don’t give a hoot any more. I asked for my size, waited a mo until the helpful lady brought some out and tried them on. Odd thing was, I wasn’t expecting her to stand around while I tried them on, but in for a penny. They fit okay and I liked the style, so I was sold. We had a little chat about if I was going anywhere nice (as I was buying fancy shoes). I said that it would be a sort of girls night out (true) and when asked where, I mentioned the Foresters. Said young lady said she’d been and enjoyed it. Small world I guess, but it felt good to be treated just as a regular customer.

With the new shoes in the boot of the car, I skipped on the idea of biker boots and skirt, and opted for something a bit more glam (well, one can dream 😉 ) seeing as it was party night. With at least three birthdays for the Chams folk – Jayne, Val and yours truly – the group had decided that that was a good enough reason for a party. Mrs H. did a top job in sorted out the orders for the Chinese food, while Tracey & Sandi had done their best with laying out a table, decorations and fetching the food.

A good time was had by all and the night was very busy. I guess the attraction of good food, good company and darker nights was too much for us all to resist. 😉 The sneaky tykes had also got a cake for the three of us and a present too. I felt both touched and a little guilty at the same time. I guess I’m funny like that. But guilt aside, the present was a very nice watch (silver, my fave!) and the card was lovely. With everyone having tucked in for seconds and then cake, time flew by and it after a quick batch of photos, it was time to pack up. With the evening being late, Sophie and I popped out for a quiet drink and a chat. I got in a little later than I’d hoped, but it was worth it….. except in my dash to switch from glam to more comfy, I somehow lost my trousers. Oh the shame! 😉