Ready for another weekly episode of the Jones Soap Opera? Not that the plot’s particuarly rivetting. I mean, who writes this junk? Oh wait… 😉

I’ll go out on a limb here and reveal what I’ve really been up to this week gone. The truth is I’ve been out in the big bad world. Yes, it was far from home and yes I was careful, but there is always a risk. Still, you do what you can to stay safe. The Ever Lovely Mrs Jones will not be happy, yet… I did it anyway. There are times when you need to get out and be yourself. With that in mind, I got ready, put spare clothes into a bag and headed out to Leicester.

The weather was good if a bit rainy, but luckily, it only rained on the way there. When I arrived, it wasn’t too hot and the wind was low: just about spot on really! The last thing you need with long hair (synthetic or otherwise) is to introduce it to your lipgloss. 🙂 I hadn’t any particular destination or purchase in mind; I just wanted some Lynn time out and about: a space to not be Richard for a while. I’d thought about getting a new bra because I’m pretty sure I’m wearing the wrong size. The back size is too small, although it does help give a decent faux cleavage. Other than that, I was easy over the plan. 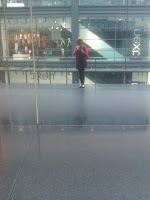 I parked in High Cross and wandered by John Lewis – which just happens to have a long mirrored wall (see right). In New Look, I found a maxi dress and hippy skirt, but after trying them on, I didn’t like them enough to buy them. The staff didn’t treat me any differently to the other shoppers, so props to them. Upstairs I tried on a few pairs of shoes to see if anything caught my heart. The wide fit selection was good, but the size nines were a touch too large. I did find some nice platform heels that were in the sale, but as I’ve already got black shoes, after a brief stroll in them to check the size, I put them back.

After that, I warned through the centre looking in a few shops. No-one pointed or stared and that suits me fine. I’m not here to be read, I just want to get on with my day. There was nothing going in the sales and as I said earlier, I hadn’t got my heart set on anything in particular. Soon I was outside and just strolling through the crowds. I checked out a few charity shops because sometimes you can fall on a bargain. I did see some very cute bright pink glitter covered strappy heels, but what to wear them with? They stayed put for another lucky punter.

Skip on a few hours and I found myself in Marks & Spencers. I was too warm in there and they didn’t have much of a selection in the corset department, so I knocked that idea on the head (John Lewis and Debenhams was the same story, BTW). On the way back, I called in to see the sale in Clarkes and I got stared at by a pair of young-ish kids.

I suppose if I’m the first trans-something-or-other person they’ve seen, I’m going to attract their attention. After a moment of feeling their eyes on me, I smiled to them and said “it’s okay, you can laugh if you need to,” but that just made them look at the floor and go all shy. Perhaps that wasn’t the best thing to say, but never mind! It seemed to defuse the situation and felt better than “it’s rude to stare.” Their mum was busy trying on shoes, so didn’t see what they were up to. If they gave her Twenty Questions over ‘Mummy, why was that man dressed as a woman?” I don’t know. Still, doing a little more for trans-awareness: we’re part of society too. Get used to it. 😛

I bought some primer from Boots as I had a voucher and as my feet were feeling a bit sore, I headed back to the car. I guess ballet pumps are okay for short distances – and part of me wondered I’d have been better off with the biker boots I had in the car. Oh well! I headed out of town and stopped off at a little retail park. The Claires staff were lovely and jolly, although I didn’t buy anything.

By this point it was after kicking out time for the schools and a few kids – teenagers – were milling about. Again, no trouble…. and I don’t say that in a ‘no trouble because I pass so well‘ gloat. I don’t feel that I do and that’s not fishing for compliments. Instead, it’s more a case of just getting on with it. I used to get hung up about how I looked – I still do on bad days – but all the wishing in the world isn’t going to change how I look. The best I can do is try and make myself look presentable….

Where were we? Oh yes, schoolkids and shops. So I was busy working my way through the sale rail in Outfit and I noticed two teen school girls looking my way. I wondered if they were looking at what I was, so I smiled briefly and just got on with looking for that illusive bargain / dress to die for. A little later on, they were a few paces behind me as I looked at the shoes. Then again not so far away as I looked through some of the summer stuff. Now, maybe it was co-incidence, maybe they’d read me or maybe they were trying to work it out. Whichever of the three it was, it felt a little…. well, creepy. Not in an intimidating way, more a keep-your-distance / stop following me vibe.

I thought about asking them if they were following me, but as I did, I realised how self absorbed and nuts it sounded. I moved back to the shoes and yes, they did follow. I wonder now if they were trying to get a better look at my face because I had my back to them most of the time. Ah well, maybe they were curious? Who can tell. I mean, us trans folk have been on the television a few times and if you’re a schoolkid and trans folk are not from your world, how do you react?

They headed off and I went to the next shop. I found a nice black dress in my size. A little long in over the knee, but it had a lovely fit to it and a folded band around the middle to put my waist in the right place. Despite the right padding in the chest area, it was a little too low in the front, so it went back. Again, I tried a boho/hippy skirt and then some short denim shorts. (Ed: brace yourself, folks 😛) Sometimes, it’s not about trying things on as you’re going to buy them, but trying them on to see what you look like. I’d only ever wear the shorts with leggings – as I was then – but I didn’t mind them. I’ve got some old jeans I can trim, so maybe that look’ll feature sometime soon. The main thing that’s put me off so far is the concern that I’m 40 in a few months. Just when do you stop wearing certain fashions? Mind you, it seems a number of women listen / break those rules, so maybe I’m not alone in that worry.

By now time was ticking on and it was time to go find a certain country lane hide-hole to park up and deprincess. All in all, a truly fab day and I feel altogether human again 😉