I’ve stalled on writing this post a few times. Not really for any great shakes, more a case of procrastination. I’ve even changed the title four five times as I’m rummaging for the right lyric in my head. Talking of such, I had hoped to go with ‘I’m down with the capital C B T’, only the rapper in question didn’t sing.. umm… rap that. Oh well! Nor can I re-use Lady Ga Ga’s masterpiece to  clubbing as I’ve used that previously.

Okay. Time for a hot choccy to stimulate the old brain…..

Ack! There’s a line I could have used. Oh well, I’m not changing the line again! 🙂 Friday night was a quality do, which explains why I’m a day late on the blogging front. I guess the youth of today would say ‘epic’, but I won’t because I’m old enough to be said youths’ Dad. 😉 I’ll start with the beginning – as per the old song lyric and go from there. After bedtime reading duties, I headed on over to Sophie’s to pick her up and apply the proverbial war-paint.

Ever the gracious hostess, I was offered crumpets. Stop the sniggering at the back! I said crumpets, not crumpet! 🙂  I do love English as a language, it’s so wonderfully bonkers. Anyways! A fine English tradition before a night out: tea and marmalade crumpets to pep one up for the night ahead. I must confess, in the enjoyment of the pikelets – no, not mini-chavs – I clean forgot to drink the tea, which I did feel bad about. On the upside, I did manage to get changed, apply make-up, do my nails and apply some false eyelashes…. to my eyelids rather than the top of my cheek or eyebrow as per previous failings 😀

Meanwhile, Sophie had put Radio 1 on and it was pumping out the usual Friday night ravery as it has done for many year. I think it was half way through ‘Molly’ that I heard Sophie starting to join in on what sounded like a church organ. Very surreal and comedic! Perhaps an album of covers beckons, Soph? 🙂

Suitably glam, we made our way to the pub and mingled with the trans massive. It was a good turnout with some familiar faces and a smattering of new folk too. I caught up with Emma and passed on her birthday card and Crunchie…. after a Facebook post suggested this was more her think. Look, don’t ask; it’s Facebook and it’s not exactly serious is it. 😉 I bumped into Sam + Mrs Sam (both were looking fine, if I may say that). Maddy was around and Gayna had somehow slipped the wire to join us merry few.

It was about this time I spotted a new face – well, sort of. 😉 A new member to our group and I thought: I know you, but how do I ask? Anyway, said lady smiled back and we wandered across to say hi. At this point the back of my brain was saying no f***ing way! Yes, another of my ex-co-workers obviously enjoys having the expense of running two wardrobes. So we said hi and laughed about the situation. Really, what else can you do? We must have worked together for six years or so, and no, neither of us had any inkling. Jenny – a different Jenny to last time – said that she’d seen the night out photos and thought I know that face? But where from!? A quick look through her gent’s social media list and the penny dropped. Doh! 😉 That made me laugh good and proper. Hopefully Jenny’ll be at the next Chams meeting, so we can chat in a quieter place than the pub. 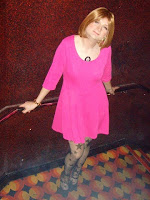 Post drinks – well, water for me as I’d driven in – we headed off to the club. It was much busier this time, but no-one gave us any trouble. No nudging, funny looks, etc. We were just accepted: or at least that was my experience and I don’t mean that as a oooh I pass brag, because a) I don’t and b) I don’t. 🙂 At one point we were all dancing away – as one does – to find a few punters had joined us and it was one of those moments were strangers come together and we all just got on with what we were there for: dancing, having a good time and raving it up. Not bad for an old mosher I suppose. 😉 Good times were had by all – there was even time for a quick photo as Maddy and I checked out the other floor. With the detail of the last group dance session fresh in my head, I began to wonder: have we – we, as in trans folk – become just part of the club-land furniture? It’s a start if we have. Maybe more and more folk just don’t give a hoot and that’s fine by me!

As midnight rolled around, it was time to head back, get changed and go home. On the way back, the simple phrase of ‘Feet ache. Ears ring. Heart soars.‘ came to mind. I was, however, too tired to post it during the wee hours. 😉

Talking of good times, I had a truly excellent day looking after Little Miss and Wee Man. The Ever Lovely Mrs Jones had a dinner date with some lady friends, so off she went. We three had fun in the park, yomping in the woods with the pooch and messing about on bikes later on. We were all kippered after all of that, but it was a truly fab day… and not a heel or sniffy of lippy in sight either 😉 Life’s good. I even managed to catch up on some housework and sort out my washing from the night before. What’s not to like?

So that’s me done for this week. Next week’s my final CBT session and if the mood takes me, I’ll share my thoughts on that next time. Well, provided it won’t be too dull.

[ Today’s lyric: No Tomorrow by Orson ]