In my best New York accent, how ya doin’? 🙂 All good I trust. This week has been…. mixed, which I guess is par for the course for us.

Monday meant it was time for another appointment of CBT enlightenment….. and…. and…. Bum. I’ve run out of steam. :- I was hoping to say something positive about the experience, but you know what? I’m struggling. Things went okay, we talked about the power of emotions and the concept of ‘armouring yourself’ against the (Ed: slings and arrows? 😛 ) day to day roll of negative thoughts. We also went through one of the off-line exercises – off-line as in: your task this week is to… – I’d brought in. I’d picked Pink Fog as my negative thought loop. For those of you not down with the trans massive, allow me to waffle on a bit. Oh, for those of you with enhanced wardrobe configurations, please stay with me as I go through what’s in my head 😉

So, Pink Fog? Nice at toddler birthday parties, camp discos and invading LGBT undead pirate invasions? Perhaps, but weak gags aside, not in this case. You’ve probably heard of Red Rage, well, Pink Fog is its jealous and despairing cousin. 🙂 To me, Pink Fog is something that envelopes you in its embrace. It’s that pang of loss; a mix of regret, appreciation and sadness rolled into a cloying chill. Hell, it’s something I can feel in my gut like a sudden ball of ice. Its cold embrace can strike when I walk by a clothing shop window, see a magazine shoot or, oftentimes, see well dressed women. Is it all about the clothes? Possibly, but is it more than that? Perhaps that’s my true fear. To me as your common-or-garden cross-dresser, it feels like I’m swinging towards the why not me? call. Not so much oh woe is me, although I’m sure there’s an element of that as with depression. 😛 However, it’s more the ignite-fuse-and-stand-well-back of why I am dressed like this when I want to look like her? vibe. The touchpaper’s lit and after a microsecond pause, then comes the cascade of whys, a kiloton of why nots and then the mental anguish of trying to stop the thoughts.

For me, Pink Fog can strike at any time, but it seems to have one pattern: when my depression is playing up. It’s that angle that gives me the hope that I can hang on to who I am and play both sides. I feel I will have to give up too much to indulge that fantasy. Yes, I did just use the word fantasy, but please note I’m talking about me here. I’m not speaking for all the trans folk out there and I do not mean for one second that anyone transitioning, living full-time or thinking of, is living in a dreamworld. I don’t have the patience, the will and – when I’m honest with myself – the feeling that if I did go that way, all would be well. There’s an old line about wherever you travel, you always take yourself and to an extent that’s true of me too: no matter how I’m dressed, I’m still me.

How does all the above apply to Monday? Now I’ve waffled on for a good few minutes, I think I can answer that. Sort of………

I think it’s that after my opening up to how I feel was met with disinterest. I felt dismissed and for a moment I could feel myself dropping from my happy-go-lucky mood back into the edges of darkness. A heartbeat later and we’re talking about the notion of “if you don’t give in to negative feelings, you won’t be depressed.” Well, f*** me, if it was that simple, would I still be on medication and moaning like this nearly two years later!? :- So in summary, CBT and I are not best of friends at the mo. I’m really struggling to see the point of it and given conversations with three folk who’ve been through it, I can’t help but feel the time might be better spent shopping for shoes and then taking the dog out for a long walk.

In other news I’m still alive and my home isn’t being shelled…. unlike the good people in Syria. Perspective, Lynn, perspective. 🙂

Work’s been difficult, but it is at least done. Projects have dragged and vendors proved difficult to nail down to finish stuff off. On the upside, my workmates have really pulled together and given their all… and yes, I did thank them for helping so much. 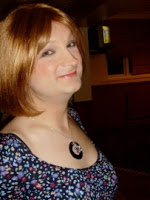 Next Thursday will be Chams time and I’m looking forward to that. I’ve also got my pass sorted out for Invasion later this month. If either are half as good as the last time, the happy circuits will be well and truly recharged. Maddy was kind enough to post a me a picture of me out and about. Unusually for me, I’m happy with the snap and as way of a change, I’m looking happy too.

Sticking with the good news vibe, I completed a driving course today. No exam or anything, although it was compulsory after my accident. I was hoping it wouldn’t be death-by-Powerpoint and it wasn’t. Instead, we had a lively discussion around various topics and then headed out with an instructor. By sheer luck, there was just me and the instructor, so no doubling up was required. We managed a long lunch by the river, a good chat – family stuff, car stuff, etc – and I learned a lot. All in good, a pleasant end to the week.