How’re things? Things have improved here on Planet Jones. The Big Project – so big it gets to have caps at the front of it – is settling down and therefore, I can relax a little. Various elements are dropping into place and the once impossible task, is looking more and more likely. Fingers crossed eh? 🙂 The Ever Lovely Mrs Jones is happier too – despite being ill again (bless her) – so really, nothing to complain about. Yay. Note to Fates: that’s not a reason to send me anything! 🙂

It’s only midweek as I write this and other than the above, I’ve two other reasons to be thankful. Firstly, Mrs. J and I ordered some shoes (Ladies shoes in 8 and upwards…. ) which arrived today. The pink satin peep-toe ones will have to go back, which while they are gorge, my toes tip out of the end. Not a good look really. As to the others, well, the north face of the Eiger meets Jimmy Choo, but at 4 quid – yes, 4 quid in the sale – you can’t go wrong really. You could spend half of that just parking in town. Photos will follow once I get a chance to put an outfit together.

How things change eh? A few years ago – and this’ll sound a bit odd – I’d look in catalogs or on-line and think I’d never be able to order stuff for home. Mrs J also joked: “If I hear a thump from upstairs, I’ll call you a doctor.” 🙂 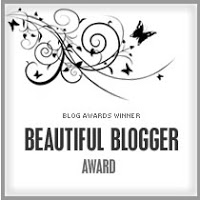 The other thing was Stace – she of Musings of an (I)Tgirl fame – was kind enough to bestow the Beautiful Blogger Award. Shucks, thanks Mrs! This was most unexpected and really did put a spring in my step. Luckily I wasn’t wearing the new heels at the time, otherwise, I may have been typing this from our local surgery 🙂

Anyways, other than a posh badge to pop in your post, there are some rules attached to this. There’s always a catch eh? 🙂 Apparently, you have to list 7 things about yourself. Crikey, after flogging the keyboard over the last few years, I’m wondering if there’s anything left 🙂 Okay… ponder, ponder, ponder… Rats, 7 interesting things. That’s going to push the envelope. 🙂

Seven lucky people. Now I feel bad for not linking to the other good people off my blog roll. Many of the above are on there because we talk off-line and that there blogs are updated relatively frequently. I can’t nominate Sophie either, ‘cos she doesn’t have a blog. Hint hint :PRighto. That’s me done for another week. I hope things go well and see you next time!

[ Today’s lyric: Stronger by the Sugababes ]