I hope things are going well your end. It’s been a right f***ing slog over here on Planet Jones: the start of the week was just a right mare (Ed: mare as in nightmare. Not it was a horse. :P). Although, looking on the bright side, the week’s jollymetre – the official UK device that measures happiness – plotted a graph like a wedge of cheese. Starting off thin and getting better each day… which was nice 🙂

Monday and Tuesday were complete non-starters: very much the thin end of the proverbial wedge. Do you have those days where you just don’t get anything done? That you get get stuck between tasks and you can’t start anything new as you won’t have the time to finish it off. Bah humbug in spades. 🙁

Wednesday was a bit better and Thursday I had a meeting in town. The meeting went well and lots of stuff got signed off and we made real progress. It was good to get out of the office – if only to break from the routine. I had lunch out… and bought some new shoes too. Well, I needed a bit of retail therapy after the first three days! 🙂

Thursday night I was at Chams early as Little Miss was stopping off at Grannys (which is the right side of town for the Centre). Other than the karate crew – who have the place before us – there was no-one about. Being early, I headed upstairs to get changed rather than transgress on the folk who’d booked the place beforehand.

Now, I had planned a rather summer-esq outfit of wide legged white trousers, a new top (well, new to me) and wedges. But… after the purchase of my new shoes, that kinda got replaced by killer heels, skinny jeans and my bustier top. I also tried my new slap – Clinque – which I bought a few weeks ago and used a make-up brush (rather than my fingers) to put it on. Close up, I thought the brush really made a difference to the finish.

With the early start, it felt like I’d been there most of the night and as I didn’t have my watch with me, the evening seemed to last for ages (but in a good way). We had a bring and buy sale to help top up the funds – I’d brought a t-shirt, some earrings and a vest top. Despite making some room in my cupboard, I bought a lovely green top (suitably fitted on the bust) but empire line so it skimmed in the right places. Thank you MyShape for the ideas of what to wear.

We also had a visit from Last Orders. Not a punk act or a comedy gig, but two people (Polo and Steph) who informed us about the recommended limits for alcohol and ensuring you stay safe. What they had to say was very interesting: certainly to hear the change in society’s attitudes to drunkenness and also the need some people have to get wasted on a night.

Steph had on a lovely blue dress and – jokingly I think – was on the look out for other size 8 shoes. I was surprised she was an 8, but then a lot of the women folk I know seem to be a 7 or 8 these days. My feet wear paying the price for being in stilettos and Steph had some gorge black leather heels with a hidden platform in them. Compared to my glamour queens, they were like comfy slippers. Oh well, something for next time maybe! 🙂

The evening went well. We had a few new faces and it was cool to see a few of the newer recruits back again for another visit. Friday went by in a blur and I had a good long chat with our new neighbours – they seem really nice.

Before I sign off, have any of you seen Undercover Dads (or the adverts) on CBBC? It’s a kids show and – as I’ll explain in a mo – it kinda weirds me out a bit… even if I really liked the demin jacket, long skirt and Uggs combination 🙂 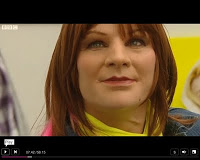 Anywho, the gig is that Dad – with some help of prosthetics and the BBC make-up department – has to pretend to be MegaNanny. The latter is a cover story to get Dad to appear as a woman and then do a series of challenges with the family. The more he gets right, the more prizes the kids will get – not that they know this. ‘Course, if he’s sussed out, there’s a penalty to the whole she-bang.

I caught the trailer while Wee Man was watching CBBC – oh that’s Children’s BBC for those of you outside the UK (YouTube clip here). It’s been pitched as a kinda Mrs Doubtfire–esq show and I really wonder how they got this one through. Hell, I’m all for a bit of pushing social boundaries, but I find this a bit much. BTW, if you’re interested, there’s a few re-runs available via iPlayer.

Anyway, that’s me done for a while. I hope the weekend’s good to you! 🙂